If Anyone Wants a New Inexpensive Computer, Here is One to Consider

Many people have written here and elsewhere that they are looking for an inexpensive but good new computer.

I received this computer from Amazon about two months ago and I am completely pleased with it. (Please note that I received it from Amazon Vine, an official Amazon program that offers items free of charge to members in exchange for reviews.)

Note that it is a desktop computer so you would need some ancillaries with it: a monitor and a keyboard. Also you will need a few cables (which you might already have). And further note that it is a Windows 10 computer which can easily be converted to any GNU/Linux distribution you may desire (obviously I desire EndeavourOS!).

But what a price! It costs (currently) only $339.99 on Amazon (and that’s with free shipping in the US). Read its specifications. I think that it’s truly a bargain!

I did a review on Amazon which explains most of what you would need to know.

I hope that this information will be of some interest to those looking for an inexpensive computer which can easily be converted to EndeavourOS. I think that this one is one to be considered.

Interesting. A new PC with a 6 year old CPU and DDR3L.

Unfortunately, I am not sure that is a good value at that price point.

Refurbished ones can also be good value:

Well, as I said, it’s an inexpensive computer. It’s not going to have the “latest and greatest.” And at its price, you wouldn’t expect it.

But it has one thing that refurbished and/or used computers don’t have: a manufacturer’s warranty.

If you read my Amazon review you can see that I am using it strictly as a media center computer and, for that purpose, it is really excellent (lots & lots of ports, something many modern computers lack). And it can also be used as a general purpose computer, allowing upgrades as finances permit.

All of this are just my thoughts and I feel that this computer offers quite a bit for a cash-strapped person who might want a new computer.

P.S. I should have mentioned in my original post that the memory can be upgraded as can the storage. Again, this could be done as finances permit (assuming that someone would want to upgrade it; I personally do not).

Inexpensive perhaps in total price, but not in value/price: in that regard it is somewhat expensive, I’d argue.

Well, as I said, it’s an inexpensive computer. It’s not going to have the “latest and greatest.” And at its price, you wouldn’t expect it.

First, I apologize in advance because I am not trying to make less of the purchase you made and I appreciate the time you took to make this post to help others. However, since it is partially a recommendation to others I feel the need to point out that from a value for the money perspective it isn’t worth it in my opinion. I think someone could do better for the same money or much better for only a few dollars more.

An 8th generation i5 NUC with similar RAM+HD would still be less than $400 and an order of magnitude faster. Alternatively, you could get a refurbished machine with better specs and a seller warranty for less money.

But it has one thing that refurbished and/or used computers don’t have: a manufacturer’s warranty.

For that warranty to have value, it has to be backed by something of significance. In this case, how would you act on that warranty and who backs it? I would say it isn’t much different than a seller warranty. This is a relatively new brand that is only sold in 3rd party marketplaces. It may not exist 9 months from now when you need warranty support.

Again, I am not trying to lessen your purchase, just share with the broader community that there may be other options worthy of consideration around this price point.

Brand new with 1 year of service at home.

I might suggest that people keep an eye on Lenovo, they seem to always have sales, so you can pick up some nice bargains, I got my ThinkCentre for about 40%, my Yoga tablet for about the same, and similar deals on my previous ThinkCentre, tablet and laptop.

I bought 2 Lenovo a few years ago cheap! 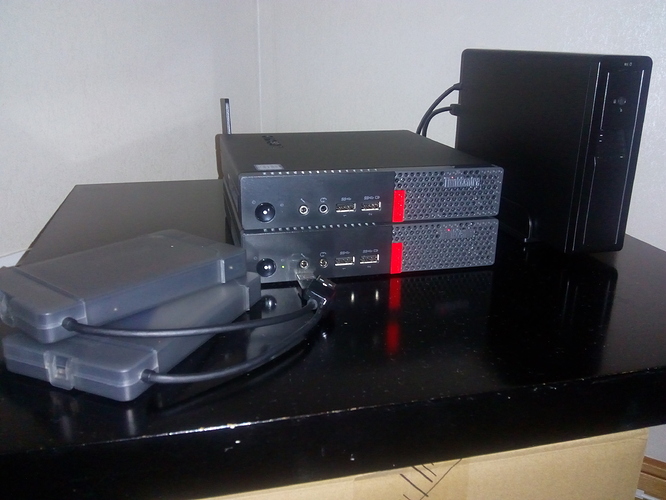 I know I posted the picture before here somewhere. But good computers.

I received it from Amazon Vine, an official Amazon program that offers items free of charge to members in exchange for reviews

I can confirm Lenovo’s SFF ThinkCentres are the bees knees. Coming out of leasing contracts you get them at outlet stores, refurbished, fully functional, with warrantee and a useless Win10 preinstalled.

I like those little computers. I was into buying a newer one of them a few months ago. Didn’t happen. I have way too many computers as it is.

Same here. 3 desktops and 1 netbook is actually more than anyone needs. Buuut in special circumstances, just like right now with my main production machine in repair since weeks, it’s good to still have a secondary main and 1 distro tester (I don’t use VMs) plus one for the road.

A little too much!

Some HPE servers: [image] [image] OpenMediaVault on them for backups.

Seems like you have the same addiction I have

4 desktops, 5 laptops, and a whole collection of SBC’s here

I’m completely the opposite.

Just 1 machine that does everything from media serving, managing 46Tb of storage and running games and work as a desktop.

Seems like you have the same addiction I have

4 desktops, 5 laptops, and a whole collection of SBC’s here

Computers, like cameras and stereo system, tend to “accumulate.” They follow the rule that in your house, “junk” expands to fill the available space.

We also have two desktops (including this Guzila one) which are used strictly as Media Center computers. This is a great use for a desktop computer in my opinion as Linux computers can easily play "hi-rez’ music files as well as high definition video. Also they are great for Zoom conferences. These computers are being used in our audio-video systems (which both have video projectors and good sound systems). For this purpose, you do not need a “high-spec” computer. You just need to adjust certain settings within pulse and VLC in order to play the above-mentioned audio/video files in their “native” ways. (I can even play Blu-ray discs with it using an external Blu-ray drive.)

But this little Guzila also works fine for Internet access, getting emails, looking up things, even going on this Forum!

And I daresay that most people here are not using the “latest” 10th-generation Intel processors or the “latest” AMD Ryzen ones. Unless you’re wealthy enough to buy new computers every year, after one or two years, you’ll be using “older” processors.

I just made the suggestion about it because we are so satisfied with it and it is an inexpensive purchase. (You ought to hear DSD music files played through it.) And yes, I got it “for free.” There was no way that I could afford (or even justify) buying another computer but, “for free,” I could afford that!

I was about to ask why anyone would need two “extra” laptops but that I looked around the room I was in and decided I wasn’t in a position to criticize.