So I just got a Samsung Odyssey G7 (which runs at 1440p and 240hz), however, I can’t get it to run at the advertised resolution and framerate. I can run 1440p @ 144hz, but attempting to run 1440p @ 240hz makes the image behave strangely as if I can only see half of the screen. I’ve tried various combinations of settings (i.e. disabling adaptive sync) but those didn’t change a thing for me. Below are some screenshots. 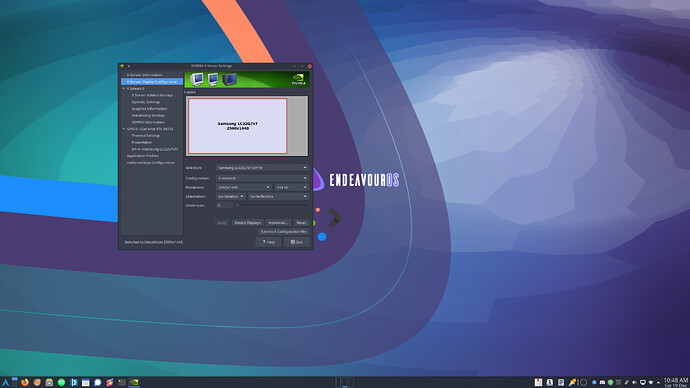 1440p @ 240hz (looks like I can only see half of the screen (the screenshot doesn’t properly capture that)): 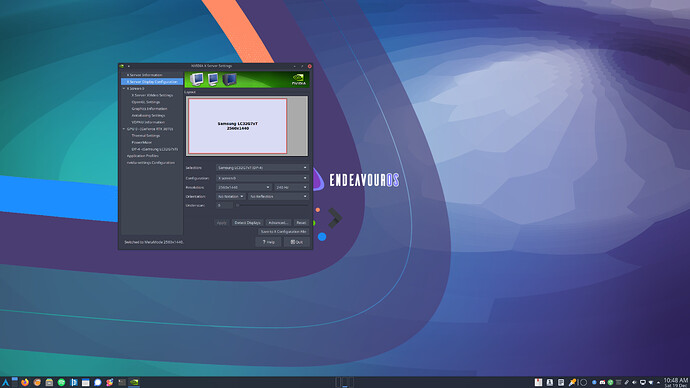 1440p@240hz requires a lot of bandwidth. Which port on the card are you using and what are the specs on the cable?

That is probably a 1.4 cable which should work.

Any ideas why it isn’t?

Actually I just tried again and it has a different behavior now. It still shows only half of my screen, except this time the actual image itself is restricted to the center third of the display.

So, I’ve never had a screen with that high a refresh rate (never had above 144MHz), but from a quick look at their page, it looks like it might be saying that you need to be running Gsync for it to work that refresh rate…does their drivers on linux support Gsync (I also hate Nvidia cards due to the proprietary drivers, so know little about that). Mind you, I could be wrong, but that’s the impression I got from the page for that monitor.

So I just tried playing some World of Tanks. Within the monitor’s on-screen control pannel, I have set my monitor to have Adaptive Sync active, which disables control of the refresh rate, and the game was running at 180fps on average with lows at around 165 and highs at 195 (as reported by the in-game fps counter) (nvidia-settings and GreenWithEnvy reported 99% utilisation). Does this mean it actually works and nvidia-settings was just reporting it wrong? I’ll try again with adaptive sync disabled and the framerate set at 144hz (of course because setting it to 240hz causes the same problem).

Actually no it was still 144hz. It was only reporting above that because I had vsync disabled. Same thing applied to Adaptive Sync being active.

Considering installing Windows to see if it handles this monitor fine, though I’m a bit reluctant to do that since that usually messes things up in my experience.
I was also able to confirm through my monitor’s control panel that the DisplayPort version is in fact 1.4.

Yep. It runs at the advertised specs on Windows.

According the Nvidia site this card should do the following.

Edit: Didn’t want to send the whole page so i screen shot each separate.

Okay? So… then this tells us that the card can 100% run this monitor at its resolution and framerate, however Linux can’t but Windows can, so its a Linux problem?

What does xrandr -q show?

Couldn’t tell you. Since I’m running Windows right now. Although I did run xrandr before wiping everything, and it showed a bunch of display profiles, none of them were 2560x1440 @ 240.00

Well i think you’ll have to check that and also xrandr --verbose to see what it shows that the monitor will do first. Maybe it’s not picking it up properly. The EDID (Extended Display Identification Data) may not be reporting correctly to the card. There is a way to read that possibly with read-edid which you can install. I don’t have a lot of experience with this so you’ll have to get some help as i wouldn’t want to tell you to do some settings that may damage your expensive monitor. Maybe you can do some more research and or maybe some of these gamer guy’s got the answer? I do have Nvidia but not these high refresh rate monitors as I’m not a gamer.

Edit: It is possible to set a custom EDID but like i say i don’t really have the experience on this to definitively tell you what you should or shouldn’t do. Just being cautious as it is expensive equipment.

Edit2: Have you tried using xrandr to set the output, mode and rate?
Example:

but that just gave me the same problem as setting it to that either by nvidia-settings or the monitor’s control panel.

Did you try any of the other display ports?