How to route audio with Pipewire

This is from another thread about Pipewire that I appended the post below to and was very kindly suggested by another of our users (I do love me the Endeavour forum, you people are really great) that I start another thread so here we are…

Jesus do I really want to get into this…ok I came from JACK to ALSA to Pulseaudio. I have done (no longer do) audio post production using a real time kernel, some custom A/D hardware yadayada…I have sort of a critical ear and have a reasonably happy music system with Pulseaudio, Pulseeffects (which seems to have gotten better as it has aged) and still have a lot of LSP plugins installed. I have not run JACKD in probably 6 months.

I find Linux dealing with audio is the most unmitigated bunch of complex garbage many times although JACK can be a save all…as can Pulse Effects…where you dont have to rebuild the audio stack each time you start the machine (yeah scripting it can be done too). So…whats going to happen to those of us that do a fair amount of post processing to our music libraries …rock gets one set of presets, classic another, jazz another some to make up for living in a concrete box and trying to fill a room with near-field speakers (Pulseeffects can accomplish this)…

I still occasionally dink around with post production so when the slathering herd’s foaming at the mouth finally results in the deprecation of Pulseaudio then what is someone like me …or for that matter those of you ranging from music production guys with a rack of $100 K A/D banks to record…to those of us who want a little more punch on the lower end in the earbuds on the laptop -most music player EQ’s are garbage, enough bass to sound good then its no longer tight and everything below 1 K is only 2 sliders with no way to change filter characteristics…

Another desktop here with another similar but different distro (its not Arch and not Endavour…) had a major update recently and it installed Pipewire. Also installed another version of Pulseefects with what was supposedly Pipewire Source and Sink plugins…and…there was…no…way…to get Pipewire audio routed through Pulseeffects . I went to the Pipewire homepage, didnt find anything about routing assistance so I screwed around with things for a couple of hours…I reinstalled the earlier version of Pulseeffects (which surprisingly uninstalled Pipewire ) and things are back to the way they were…I am all about a change for the better in what passes for the audio stack in Linux to get rid of layer after layer after layer of obfuscation, enough to make a rock cry…question is…how does one do routing with Pipewire…the" other which shall remain nameless distro would play audio straight from Audacious and from Fireweasel no problem but nothing I could do would cause the audio to go through the brand new custom version of Pulseeffects with the pipewire source and sink… Any assistance or recommendations would be very much appreciated…

I don’t want to be that one. But a little line changes sometimes make everything much easier to read. Keep in mind that we have tired eyes

Odiouslmp
The version of Pulseeffects I tried with pipewire did as well just no apparent way to get audio through it.

SweSG
You are correct and my apologies. I have since edited, if not for clarity of meaning, then for somewhat easier on the eyes.

Regards to you both and kind thanks.

Late to the party, but you could try Catia ? 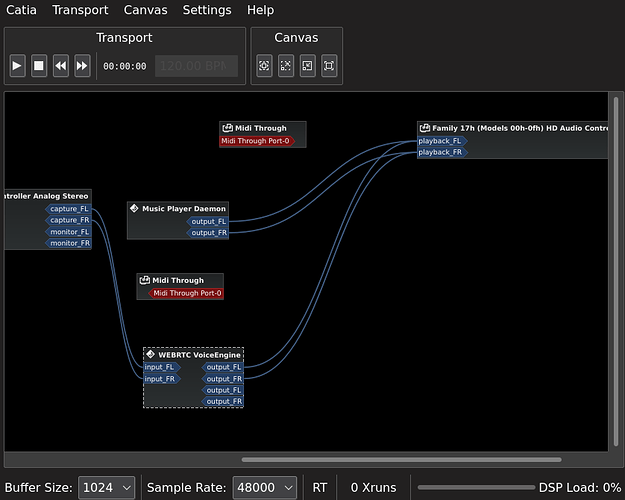 r/linux_gaming - [Tutorial] How to share audio on Discord (or any other voice...