How to replace Cinnamon with Plasma?

I’m comming to the best community because lately I’ve heard and read a lot of good things about Plasma 5.25 and started to test it on VM. I’m aware that it has some bad things as well, but nothing is perfect (except for EndeavourOS, of course

) and I think I can manage those known little issues.

I like how easy is to get a nice looking desktop (yeah, for me): 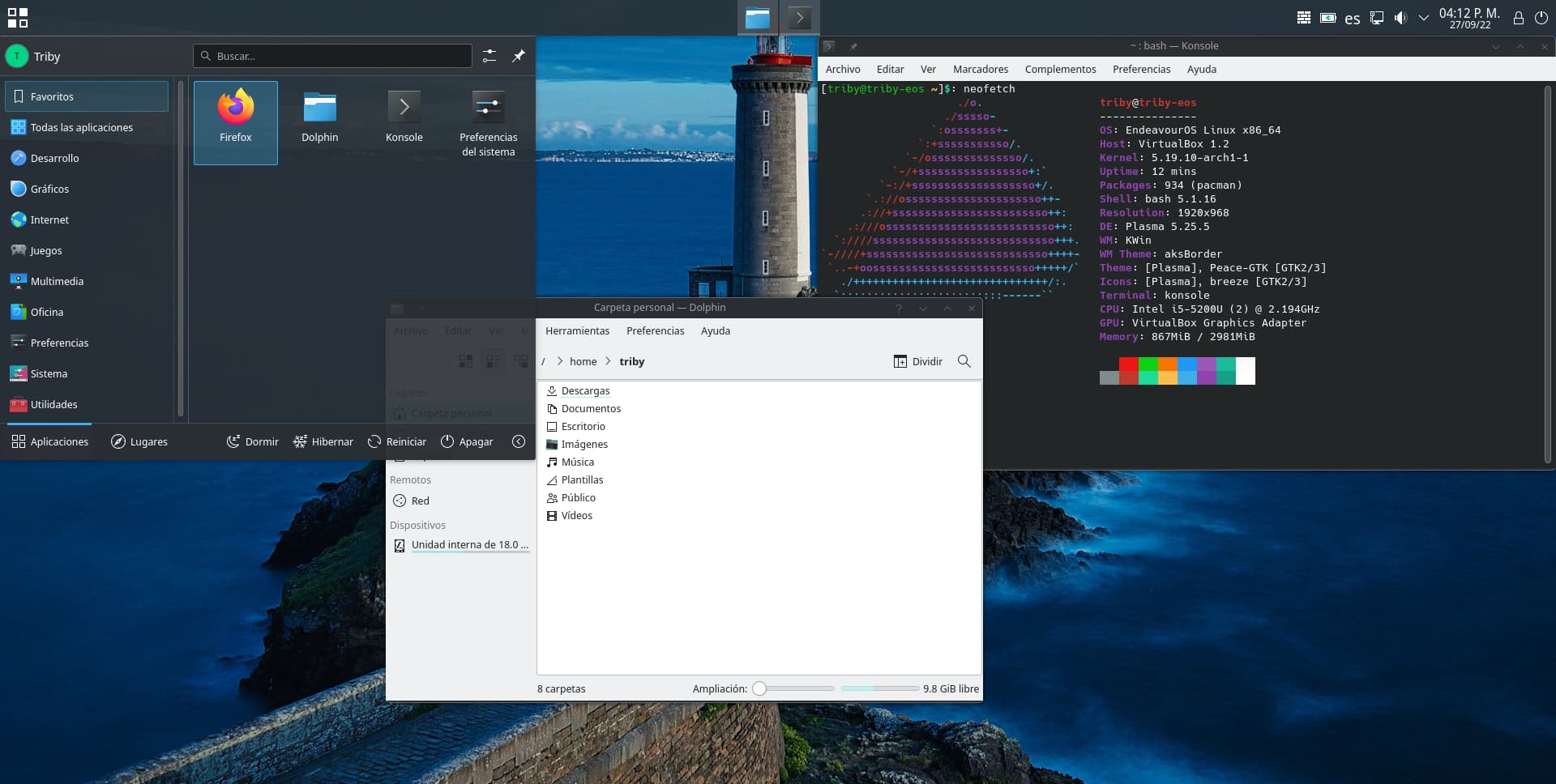 One of the reasons I didn’t use it before it was I’ve found in Cinnamon DE a easy way to manage virtual desktops and apps, but now in Plasma is pretty easier: 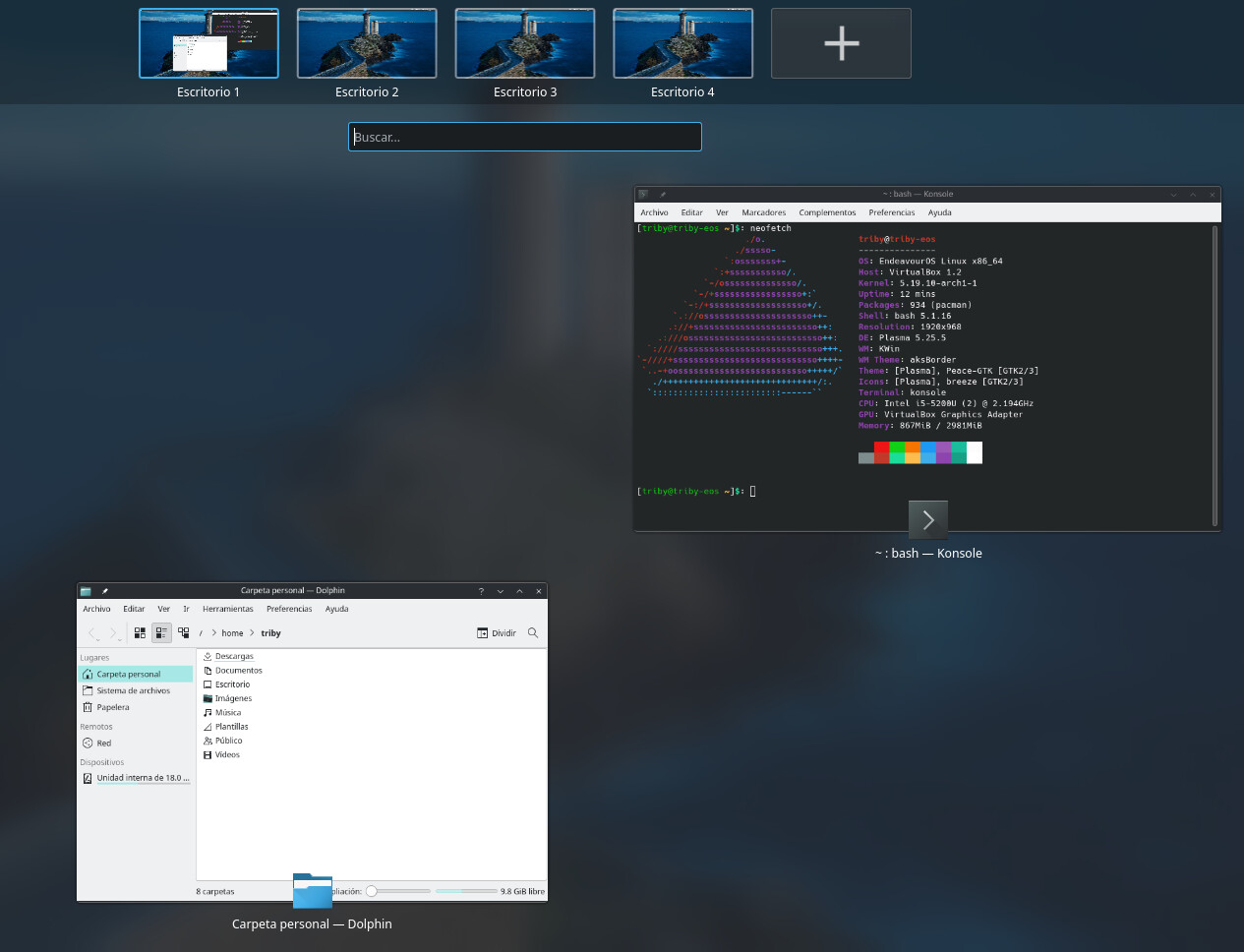 The plan is to keep testing for a few weeks on VM and replace my current DE when I’m ready.

What’s the better way to change from Cinnamon to Plasma? Wil it work to just install Plasma and remove Cinnamon or is it better to reinstall EOS?

Best way is to backup your home and reinstall

it has some bad things as well

I have been mainly (and still) on KDE since the start and tried for some time Cinnamon, Mate, Gnome.

Just curious, what’s bad about KDE Plasma?
(the only “bad” thing I experience(d) -and it is not related to KDE Plasma itself- that Baloo didn’t play well with BTRFS, so it is really a Baloo “bad thing” not KDE)

I have both desktop environments installed in parallel on EOS. Nowadays, I prefer to use Cinnamon, I start KDE less often. You can also remove Cinnamon, but it’s not easy. You can choose to create another user and install KDE there.

I would look at:

to see what packages are installed by default when choosing Cinnamon in EnOS’ installer.

Then you could install KDE and start removing packages installed for Cinnamon.

Perhaps it would be better to first create a new user as has been suggested above.

Here are a couple o Discovery articles on the subject:

Best way is to backup your home and reinstall

It makes sense to start on a clean installation and surely I’ll finally do this, otherwise I must change some other stuff on my current EOS, like replacing ufw with firewalld and maybe other services.

There’s a lot of configuration options and it’s not easy to find what you want if you don’t know the DE already, on VM I’ve broke the panel just by inserting separators (yeah, dumb me, dragging out menu and other items) and some changes needs to logout and relogin to see them.

I prefer to use Cinnamon, I start KDE less often.

I really love Cinnamon because it’s really easy to use and adapt it to my workflow, but Plasma looks much better and the new features are making this desktop amazing.

You can choose to create another user and install KDE there.

Here are a couple o Discovery articles on the subject

Thanks for these useful links and for confirming the advice to create another user.

Finally, thanks everybody for your great replies, I’ll keep on testing Plasma on VM for a couple of weeks before doing anything else.

I’ve been there.
Baloo is wonderful but not with BTRFS. Under BTRFS Baloo reads every snapshot as new files and reindex it again.
So, after 3 snapshots, with a single unique file with a single unique word, searching for this unique world will return to you 4 results (the original 1 + 3 snapshots) of the same file and the 4 pointing to the same file.
So, it is indexing all the time!
I wish Baloo fixes this.

There’s a lot of configuration options

I see! I tend to go with defaults and leave it as is.

I’ve broke the panel just by inserting separators (yeah, dumb me, dragging out menu and other items)

Ah… the normal naughty Linux user like me who sometimes play with the system and ends up breaking the system. Yeah… my experience with KDE in general you can play with whatever you want but the panel is the most “dangerous” thing to play with!

I don’t know if it is possible technically that someday you can just install other desktops with the same user and use the same /home folder.

I did it once (another desktop with same user) and it was a mess!

When the desktops have nothing in common it should be fine. Examples: KDE/I3/Enlightenment/XFCE should all play nicely together.
Probably some others of the tiling environments too…but I don’t know for sure.
It’s just that several have KDE history lol and thus some shared stuff. And Gnome just has a lot of ‘stuff’ that it autostarts and mixing them is heavy and possibly a bit unstable.

have nothing in common

I was thinking of LXQT which has a lot in common I think. So I better forget about it.

I tried KDE and LXQt on the same user, and it was a mess. I eventually created a new user for LXQt.
KDE autostarts a whole bunch of stuff which messes with other DEs.
There are also configs for gtk and qt which might overlap between DEs

I tried KDE and LXQt on the same user, and it was a mess.

I did it once and ended up doing a fresh install.
I’d better stop being naughty and breaking the system all the time.
I’m on EndeavourOS because it is a wonderful “rolling” release that is installed only once. So, really no point in breaking and reinstalling.

I did it once and ended up doing a fresh install

what’s the fun in that?? It’s more fun to fix a broken system

I just fixed what was causing the issue. If I remember correctly, I backed up my config files and restored them and everything worked out

I think Gnome is the best looking DE out there, but I’ve tried almost a year ago and it’s not for me, because there’s some little features that I need like easily select the right window when having 2 of more open from the same app or compact view on file explorer (Nautilus doesn’t have it).

Well, for me it depends on how severely broken. I prefer a simple “broken”, because I am not like any of you guys here.
I am just a user, struggling to understand a bit more.

I think Gnome is the best looking DE out there