How to enable Nvidia driver?

Hey delightful Archies.
This stupid girl has installed Nvidia DKMS drivers, since I’ve heard they are the only ones that work. Still no joy. I’m in Second Life and it still shows me I’m on mesa driver or sumsuch and my graphics settings won’t let me get to higher quality.

So, how do I install the correct driver for my GTX770?

Hello @Orca
Can you post at minimum inxi -Ga

Edit: Your card should be using the 460.56 driver version

You can run the following and see what it reports.

Then you can run a test to see if it gives any errors.

Then you can install the nvidia-dkms drivers

Then you can reboot

If you installed nvidia-dkms what does it show installed. inxi -Ga 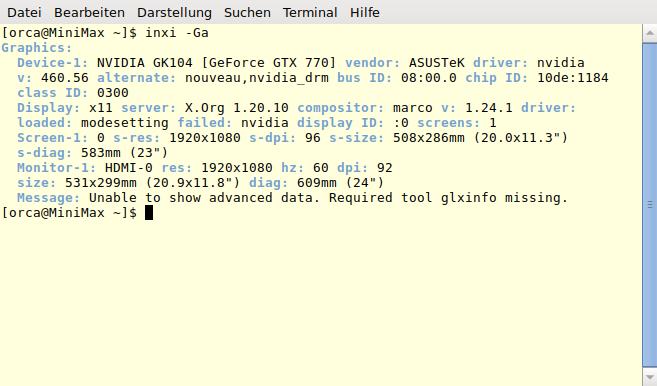 I installed nvidia-installer-db a couple times … it never seems to stay installed.

You should install the package mesa-demos to get more detailed information about your graphical environment. It provides glxinfo which is, in your output, claimed to be missing.
Then rerun the inxi command.

The database contains the following files :

Looks like I’m good, no? Only my SL viewer seems to think I’m on lame-ass Mesa.

What does inxi -G tell you?
What is the output of yay -Qs nvidia and uname -a?

The command inxi -Ga will show information on Graphics Hardware and with it also used Driver.

Your output from above shows nvidia failed:

if you would provide boot journal and check if it is a dualgpu system:

yay -Qs is too long to copy or make screenshot of

if you would provide boot journal and check if it is a dualgpu system:

Sorry, what? These are all bohemian villages for me.

But more important: Why did the install fail repeatedly?

You can use this to upload and get a link to the log.
yay -Qs | eos-sendlog

@Orca
You might want to set up the additional configuration via the wiki and it may solve the issue. See what @joekamprad recommends. This is what i did originally.

It can happen that you will fail to load the Nvidia driver in some cases, like the presence of integrated intel GPU (build in on Motherboard) system can get confused and fail to properly load on Nv…

That is only half of the command. You forgot the nvidia part. We just want to find out which packages containing nvidia in the name are installed. Leaving that part away shows all installed packages which makes the output so big.
The correct command would be 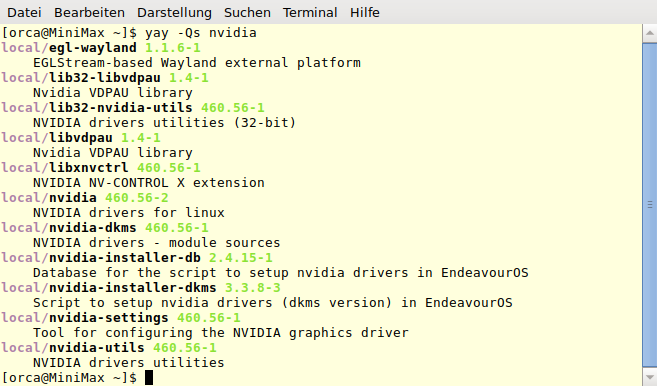 In the meantime I got the driver installed, following Rick’s link.

Thank you all for your immeasurable helpfulness. Next round’s on me.

Sometimes i miss the details not thinking. Thanks for pointing that out.

If you now look at inxi -Ga it should show the proper driver loaded for the card and also X11. 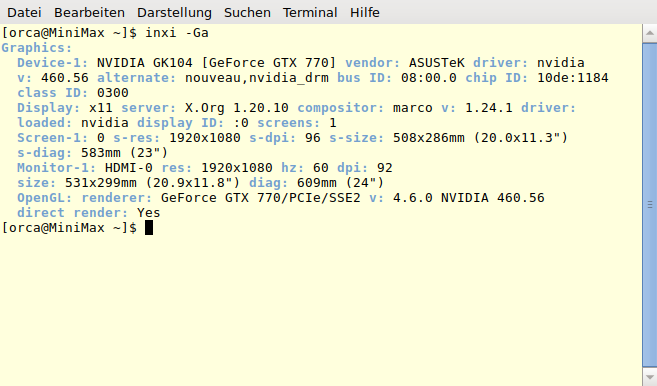 Yes …it shows the device-1 GTX 770, the driver is Nvidia and version number 460.56 Display shows x11 with driver being Nvidia. Open GL: Renderer shows the proper device that is doing the rendering. If it doesn’t load the driver properly then this will use mesa and not show your hardware and will show in display that driver loaded (Nvidia) failed.

This has happened to me also on my Nvidia system and on another that i built for someone else.

Glad it’s working correctly for you. Just F.Y.I. on the latest kernel i had an issue with it and i had to reinstall the drivers, the kernel and the headers to get it to boot as it was booting to a cursor. Occasionally these things can happen with kernel updates or Nvidia updates but not often.