How do you play and organize your digital music content?

Just realize the whole old iTunes library is in .AAC format. Is it worth redownloading all that in the lossless format provided in iTunes?

And then try to convert this into FLAC, and any caveats to do so?

Is it worth redownloading all that in the lossless format provided in iTunes?

Obviously yes. In order to convert it to .flac

And then try to convert this into FLAC, and any caveats to do so?

Only one, if you’re truly paranoid like me…lossless is lossless, but still i don’t trust proprietary apple garbage.

Just realize the whole old iTunes library is in .AAC format. Is it worth redownloading all that in the lossless format provided in iTunes?

I’d say it depends on your hearing and equipment. Apples AAC-encoder is usually considered the best one out there. Overall, AAC with bitrate of 160kb/s or higher is transparent for most ppl.

If you unsure, download some tracks you know well in both formats and see if you can hear any differences.

Coming from Macs, I still use iTunes for my main music library that has grown much over 3 decades, after firstly ripping all my CDs (hundreds of 'em), and adding tunes/albums from the net here and there, subsequently.

My No.1-Go-TO for inspiration to new sounds has always been Radio Paradise from their very early days (20+ years ago).

Only in the last few years have I gone back to more Jazz and Classical music than ever before. It comes with age, I guess… 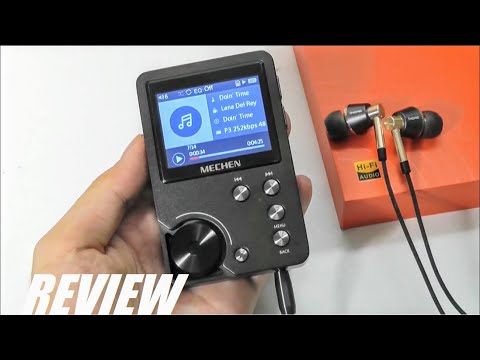 Anyone experience with something like this? Is it even worth it in comparison to smartphone?

I use a DAP, mines the Xduoo X3II with custom firmware. These will usually drive headphones much better than most any phone as they tend to have weaker AMPs or no real AMP. The actual output quality will depend on the DAP and which smartphone youre comparing it to. LG and HTC use to have phones that could compete with better DAPs but youd have to get those used now.

These days most phones dont worry a whole lot about audio output and some of the reviewers that use to do tests for audio output dont even do it anymore. Its all just kind of settled on “good enough” and left it there as most people really dont care. If mobile audio is of concern to you, a DAP is a good choice for quality and power output.

In regards to offline voice, yes its possible an use to be a thing. The issue with it is the accuracy. Doing it locally on a phone tends to use more battery and be less accurate to my knowledge. Its usually OK for basic control but that depends on your language,dialect,etc.
Im not sure what software does it these days though youd have to look into it.

I find the whole concept of “streaming” to be abhorrent, since it is defective by design

Oh, as for any historical perspective, after having bought hundreds of Vinyls with everything I ever wanted to listen to back then, starting in the mid-1970s - when CDs came out, doing the same thing over again… you get the picture… mp3s were finally more than welcome.

With global bandwidth extension of the internet and refined digital listening tools - of course - sound quality has become an ever-more important prerequisite by now.

Is Rhythmbox still being developed or is it a discontinued model like Winamp?

This seems to have USB C!

I’m probably old-fashioned (and see below for another description} but here is how I play and organize my digital music content.

If I can’t OWN it, I won’t PAY for it. That completely rules out streaming for me. (That includes streaming video too.)

I have over 2000 classical LPs and many hundreds of classical CDs and SACDs. (I even have quite a few 78s!) All of my SACDs have all been transferred to digital files and many of my CDs have too. But now, when I buy any music, I buy downloads which I can own.

I also have my MP3 files (which are on those external hard drives) transferred to two 256 GB thumb drives. Each is kept in our two cars.

Years ago we drove across the country playing nothing but the music on one of those thumb drives. That was going as well as coming. We only got through about 40% of it. And over the succeeding years I have added much more music.

I can listen to just about anything I desire anywhere I am and whenever I want.

I believe that I cannot lose my digital music short of a nuclear bomb hitting my town.

By the way, I play my digital music with Audacious. I like this player better than any other I have tried. It plays every kind of music file I have and it plays them all gapless (that’s important with classical music).

Thanks for reading this. I hope it was interesting to you.

Jeez, you might be even, as Richard David James would put it…

P.S. For those poor souls who’re thinking something vicious - what he means is lord of analogue synthesizers…nothing more

Nothing inappropriate here, folks. Move on…

Yup, and you can use it as a Bluetooth or USB DAC with a phone or PC. It works ootb with linux as a DAC.

Digging a bit deeper I stumbled on this

HDtracks | You can hear the difference. Listen on the go in master studio...

HDtracks is a high-resolution music platform for music lovers to download their favorite tracks in master studio quality. Join us today for the ultimate listening experience!

one 4 TB external hard drive which I keep in my safety deposit box in my local bank.

That’s probably the least safe place for it. Also, for music collection that can be re-downloaded (with some effort)? Not necessary in the slightest.

I have my music stored on my phone, an external hdd and a spare sd card, I have the majority of anything I don’t want to lose backed up in at least 3 places. With music my taste is always changing and normally listen to the radio or youtube these days except for when I’m out and about.

That’s probably the least safe place for it.

The cloud on a remote server is saved in several different places. So technically safer

All my CDs are ripped to FLAC, and I only buy lossless downloads. My FLAC collection is backed up to two other hard drives.

I used to use Spotify for listening to

I own many, many CDs, not quite the 2,000 that another person mentioned earlier, but I ripped those to my HDD as well. I prefer owning physical media and ripping it to digital because there’s no guarantee that it’ll still be accessible on the internet. Case in point: I have Youtube Premium, which gives you Youtube Music as an included option. I like YTM, but there have been a few songs that I no longer have access to - they just disappeared from my library, and when I search for them, they don’t show up. I can only assume that the content was removed for whatever reason. I ended up buying the physical media. On the other hand, I also use jazzradio.com, and pay for the privilege of no ads. $100 every 2 years. It’s a good way to hear music I haven’t heard before.

Both have advantages, both have disadvantages. I personally don’t like how everything is moving “to the cloud”, but I also understand that’s the trend. Doesn’t mean I’ll follow it all the way though. As others have said, backups are critical, and the cloud is good for that. Otherwise, honestly I’d rather keep local copies of things. I don’t necessarily trust others to safeguard things for me. That’s my $0.02