HDD constantly being spun down

I’ve returned to update on this issue I posted which has been automatically closed, see below;

Since the update just a few hours ago, and an immediate reboot to finalise the update, I’m getting random freezes in the Dolphin interface, and listening to the sounds my PC is making, it seems my hard drives are going to sleep - the unmistakable soft click of the HDD head going into sleep position, will happen after not very long. And then I’ll go to click into a folder or something, and then I’m waiting for a good 10 seconds before anything happens, at which point I can hear the soft HDD click…

I can hear the drive spinning down very soon after it’s just been in use, that distinctive “tink” of the HDD head parking, and then whenever I do anything that involves that drive, the system locks up, I hear the drive spin up again, and several seconds later, the system is allowed to continue doing what it was doing.

It’s definitely Endeavour OS spinning my drive down. Here’s how I know why;

If you haven’t changed anything TLP should be installed. TLP - ArchWiki (archlinux.org)

You could try uninstalling/disabling it.

Thanks man, yes tlp was running, and now I have edited /etc/tlp.conf and set TLP_ENABLE=0, and “tlp-stat -s” shows that it has been disabled now. I’ll see how it goes over the next few days of use. (Hard to tell right away if it’s working)

One thing I did notice, which is really suspicious (and annoying) is in gnome-disk-utility (Disks), that 4TB drive has a “zzz” icon next to it, and the other drives don’t! And it disappears when I do something to access that disk.

Annoyingly, going into the “Drive settings” from there, shows “Apply Standby Timeout Settings” is off. I’ve turned it on, and set the slider to “Never”. And yet in my initial tests, the “zzz” icon still comes and goes with the disk activity.

But I haven’t actually seen the computer lock up waiting for the disk just yet. That will take time to notice. Just thought I would add this because it’s even more information that something is being done to this specific drive regarding standby mode!

Ah, thank you for reminding me. Well now that I’m fiddling with tlp I guess it’s a good idea to try. I’ll give it a few days with the current changes to see what happens, then try that, so I can be sure of what made a difference. 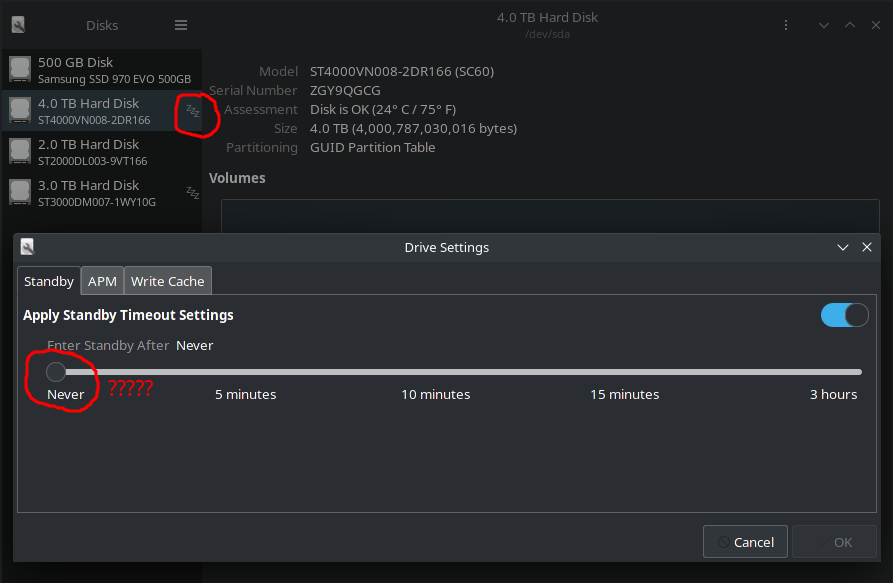 Since setting TLP_ENABLE=0, I haven’t noticed the delays anymore…

Though I have to mention - the zzz’s still show up as in the screenshot (gnome-disk-utility). Does anyone know what it could mean - why the zzz icon shows up even though I have standby set to “Never”? And if it really does correlate to drive being spun down into standby?

UPDATE: I’ve noticed that since TLP_ENABLE=0 has fixed the delays, it now adds a new kind of delay, on shutdown - the system hangs on “Failed: TLP startup/shutdown”. After a good few minutes, it will force shutdown itself, but when I’m just rebooting, now I’m in the habit of hard resetting every time it gets to that point.

Does anyone know why the system would hang on shutdown if TLP_ENABLE=0, or why my HDD is constantly set to sleep with TLP_ENABLE=1?

Thank you for harassing me to re-try your idea. Initial tests look good; first when I re-enabled TLP and restarted, I started trying your idea, and as part of that, I wrote down my default settings in a text file and saved it to that drive - and that annoying 5 second delay showed up as before from the original thread.

I made the changes as you suggested, rebooted, and then I left a document open for a good hour and the gnome-disks-utility open as well. When I came back, the ZZZ’s were still not there next to the drive, and when I made a change and saved the document, there was no annoying delay.

So I will continue on like this and see how it goes.

Wow, that hardware company are still in business with junk like that? Incredible and shouldn’t be tolerated, just…

I had a Tandy1000RLX-HD with a 40MB hard disk. It did the same thing that was said by @Domarius (I’m sorry this happened to you on way-newer equipment). It did it frequently too, like hold for at least five seconds with the horrible sounds it did. Most horrible was when starting the computer. Imagine if I had to use a 32-bit operating system on that equipment? I did install MS-DOS v6 and made the bad choice of using compression of that entire disk. Should have produced failure shortly afterward, that’s how slow and noisy it was.

I keep seeing Seagate stuff sold in Walmart and stores like that. I don’t even want SSD out of them. I’d accept my head blown off at gunpoint rather than buying one of those flimsy things.

I don’t think it’s the drive to blame, because I don’t have these issues in Windows, not during Windows 7 or Windows 10. (Also issues from 30 years ago are probably not relevant anymore since the entire staff of the company has likely changed in that time)

Ok this hasn’t made a difference unfortunately. It’s gone back to having the annoying delays at random points, and I can hear the HDD click as it spins down or wakes up. And it STILL does that extremely long delay on shut down, just doesn’t show the “Failure: TLP startup/shutdown” error.

I’m disabling TLP again, the error message doesn’t seem to be related to any of the issues.

There must be something else…