Well, I didn’t think we would get the upgrade to Xfce 4.16 today

but as the graphics bug (with the theme Ark-Darker) shows, not everything is so green there yet. How can I straighten this out? 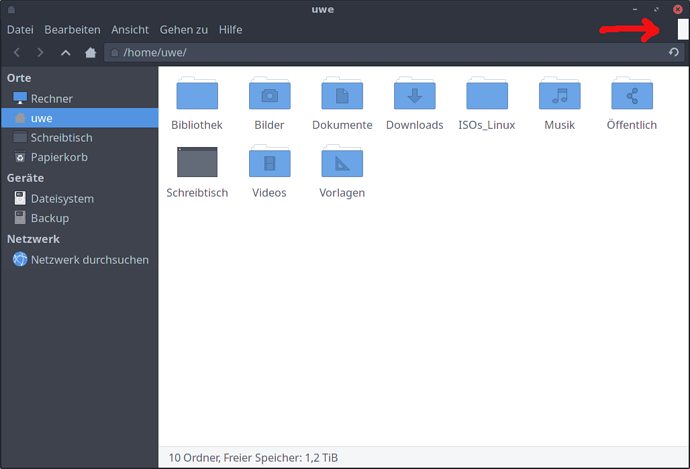 I just noticed it on mine also.

Edit: If i change it to Arc Dark it is still visible under the dark color.

The problem is not only a graphical glitch. Notice that you also can’t move the window by grabbing the white rectangle with your mouse, but you can grab anywhere else on the menu bar to the right of the menu items.

The bug first appeared today with the update to Thunar 4.16.0.

ok, I changed the title accordingly.

How can I straighten this out?

Downgrading to the previous version of Thunar corrects the graphical glitch:

However, I may have been wrong when I wrote:

It turns out that in Thunar 1.8.16 it was likewise not possible to move the window by grabbing the right end of the menu bar. So the new problem may indeed be just a graphical glitch.

it only happen with thunar, so lets hope thunar will get a solving update soon…
or it could be the arc-theme ? as it does not happen with other themes (but sadly arc is the only one looking that nice and modern)

I running Arch at this moment and Thunar is at 4.16.0-1 with no issues.
Noticed one ugly battery icon, outside of that a perfect update.
Now time to update my other computers.

Actually, it was Thunar 4.16.0-1 in the stable repos that caused the problem for me. Downgrading to Thunar 1.8.16-1 corrected the problem.

Note that the problem is apparent only with certain themes. Arc-Darker displays a white rectangle. Arc-Dark displays a lighter-grey rectangle. I don’t see the rectangle with Adwaita variants, but I presume it’s still there, only in the same color as the rest of the menu bar.

The underlying problem may be that Thunar is not drawing the menu bar to be the same width as the window.

OK, that looks like an upstream issue. They’ll probably fix it soon enough.

Note that some Xfce packages like orage is no more available, if that happens to be related to the issue. 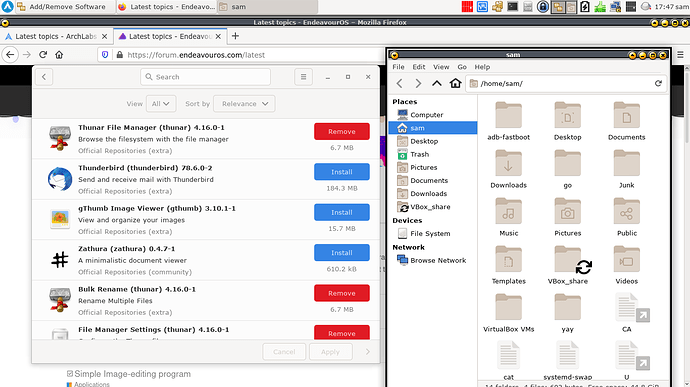 I am doubting what I am seeing with this update. One fo the features is supposed to be better scaling support, especially for hi dpi. Naturally, this is the first thing I am trying out. So, off to the appearance/font and appearance/font-dpi settings, WindowManager font, etc to reduce to normal size - then the display. Tried 1.5, which should theoretically give me about an effective screen res of 2880x1620 (from 3840x2160). Instead it gave me an apparent 5760x3240!!! The wrong direction!! You really don’t want to read an 11 point font on this screen now - and I have no idea how they are doing it…

2x scaling goes the same direction - but more so - but on the briught side it appears that it is on a per-monitor basis. I’ll try to get a screen shot for you. 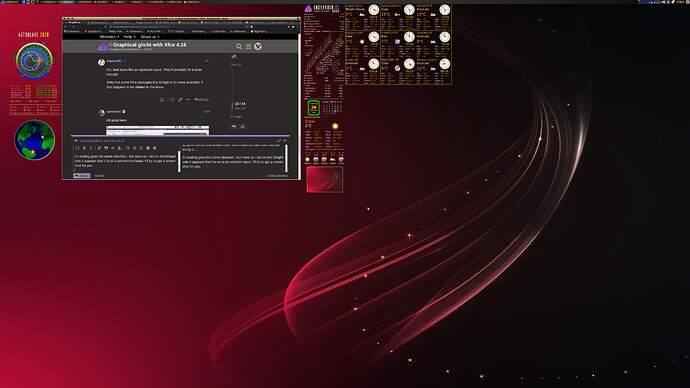 This is what is on my 28" monitor - originally the display was across my 4K 28 incher, AND the 1200x1600 20 incher beside it. Now it doesn’t fill the 28 incher, even with the conky intended for the secondary monitor included! (That’s the clock farm, btw)

Edit - the 20 incher is currently display 1.5 times the original clock farm - in a corner…

Edit 2: Can they possibly have scaled the resolution of the monitor, rather than the video output when doing the math? How did this get out of testing? Shouldn’t be long for an update though…

Speaking of Thunar, I am annoyed that my pet peeve wasn’t adressed: The fact that all folders have different icon distances depending on file names in that folder drives me nuts and is the main (only, really) reason I always install another file manager in Xfce. I can’t stand it, it bugs me to no end.

Btw the annoyance of Gnome contaminating all other GTK environments have started, I noticed dialog windows in Thunar now having their buttons on top instead of the bottom of the dialogue. Which is the exact opposite of millenia of habit: You end a page at the bottom when you read, and so you “sign off” at the bottom.

But no, Gnome thinks it’s cool to have the buttons on top since they “know best”. And now it’s in Xfce. “Yay”.

I agree that the item spacing being dependent on filename length can be annoying - but I have mitigated it to some extent by extending the default spacing to be larger, thus reducing the frequency of the effect. I haven’t seen of the CSD dialogs show up yet, though (the ones with the title bar compromised, and removal of exits to the top) n Thunar. AFAIK and can find, that CSD nonsense has only infected the settings apps so far. Perhaps different themes affect that. I am also displeased by the appearance compromise that forces - I prefer my own choice of close buttons, for instance.

For functionality, though - the new version appears to be an improvement beyond those complaints - and not a reason to go elsewhere as yet!

Thunar looks okay here.
The only thing I noticed was this huge battery icon, with all icon sets.

Note that the problem is apparent only with certain themes. Arc-Darker displays a white rectangle. Arc-Dark displays a lighter-grey rectangle. I don’t see the rectangle with Adwaita variants, but I presume it’s still there, only in the same color as the rest of the menu bar.

I don’t see it in the Numix-Frost-Light theme (which I’m still using!).

the glitch in thunar only happens if you where using arc-gtk-theme, downgrading thunar seems to be a workaround.