Hey folks, I am having problems with installing Endeavour os on my secondary drive. I have an acer laptop with an Ssd and Hdd.

Windows 11 is installed in ssd primary (by default) and I want to install endeavour in a 100gb partition on my 1tb secondary hdd.

And during installation from the usb, the manual partitioning tab is only showing tha hdd (eg : 800gb data partition and 100gb unallocated).Do I have to partition the ssd so that it will show up in gparted or is there another problem?

(different question) I found someone on youtube mounting the root to a ssd partition and home to a hdd partition. Is it safe?

Windows 11 is installed in ssd primary (by default) and I want to install endeavour in a 100gb partition on my 1tb secondary hdd.

And during installation from the usb, the manual partitioning tab is only showing tha hdd (eg : 800gb data partition and 100gb unallocated).Do I have to partition the ssd so that it will show up in gparted or is there another problem?

It depends on how much space you have on your Windows 11 SSD. Do you also see the Windows 11 disk with Gparted during installation? If there is enough space on the SSD for Windows and EndeavourOS to be installed, you will first need to resize your Windows partition, then create an ext4 Linux partition in the resulting blank space, and after resizing it, you may be able to create it as needed. a swap partition, depending on how much RAM you have. You should only store your data on the HDD.

Update. I see that due to the lack of what @joekamprad writes, you can’t see the SSD drive, so you should try it first, and then after you’ve seen both drives, you can decide which one you want to install EndeavourOS on. If there is enough space on the SSD, after resizing it, I would definitely install EndeavourOS on it and store the data on the HDD separately. If this is not the case, you may want to install it on the HDD after partitioning, but you will also need a swap partition.

can you try booting and add nvme_load=yes to the kernel bootline?

Boot menu is the one which has 4 options right?

Eos with nvidia driver
Eos general
Something
Something

So basically you are suggesting root on ssd partition and home on hdd right? 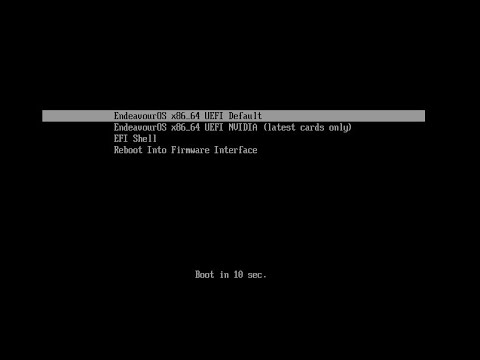 Thanks man. I will try it as soon as i reach home.

Yes the Acer will have Intel RST most likely and that is why it doesn’t see the ssd. It need the vmd parameter on boot.

Yes, I recommend this if you have enough free space on the SSD for EndeavourOS in addition to Windows 11. The HDD is more for data storage, although I think by default the installer wants to install the home directory on the EOS partition. You can store your larger data on the HDD which is worth formatting to either NTFS or FAT32, both file systems can be read and written by both operating systems.

I’m reading now that the story isn’t that simple.

It’s already been handled in manjaro latest release this is causing a lot of failure with this Intel vmd crap that is in laptops, causes a non-bootable state because the nvme drive can’t be seen.

It is that simple on most RST enabled laptops it requires the vmd module to be loaded via kernel parameter or from the modules section in mkinicpio or somewhere else depending on the installer or method of install.

It’s not working. Still not been detecting the ssd

I an not quite sure how to do that . Can you point me to a similar thread/answer so that i can implement it.

Are you able to boot on the live ISO?

Yes , no problem in that

Are you connected to the Internet? Open a terminal and run

Sure, just a min

Are you able to show the screen of what gparted shows?

Yes, just booting it up. Will post a photo here