Gnome seems fine for me

I prefer to be the gnome hacker, and not the executive using kde

Do you agree with me on this?

I get why people don’t like it in terms of workflow it’s very different from everything else out there, a lot of the negativity seems to come from people that liked pervious versions of gnome & the perceived arrogance of the devs… I’m in the camp of liking them having a vision for what they want to do and executing on it

I can’t see myself using any other de anytime soon, I’ll continue to play around with others in VMs but gnome does everything I need in a super simple aesthetically pleasing way.

There are 10 kinds of people:
Those who get Gnome
Those who don’t

arc menu to add in hibernate

The funny thing is that this option is actually present in settings. But, its buried so deep (configure power-button action under power sub setting) that people won’t look for it thinking that being gnome maybe they removed it.

KDE can be made to look like whatever you can imagine though. It’s just a starting point.

Very well said. For normal user, it gives familiarity to windows. And for advanced user, it’s begging to be configured and riced up.

Well, to be fair, I decided to try gnome due to wayland…

And it works beautifully. For me on desktop, KDE rules but on laptop gnome with gestures makes experience so pleasing. Initially I hated it so much, but now I’m went from hating it to loving it. What sorcery is this.

I used Gnome 2, and some of Gnome 3 (When Unity went away) and I would use it now except for the CSD debacle. The reasons for doing it make sense - the way it was done does not. While saving vertical real estate has advantages for laptops, there are better methods for achieving that result - and destroying 30 years of UI expectation by relocating OK/Cancel etc from the bottom right…!

Without that, (and preferably with my ideas on the top bar!

) Gnome has a lot going for it… but I remain on XFCE.

It also works under wayland I switched a couple of weeks ago no issues so far.

no issues so far

Alternative for Xeyes that works with Wayland? Applications

A dead serious question (even though it may not seem so). Is there an xeyes version that works on Wayland? Is such a thing even possible? If I’m going to use Wayland, I need that…

Try it, and let me know your experience with it (in that other topic)

I will definitely look into it then. The next time i try Wayland/kde! Thanks. I guess she everything on my end seems work well,I never really bothered to look further.

Spoiler alert: it won’t work. At least not on any native Wayland application, including the entire desktop.

Xeyes, really that’s what’s holding you back on gnome 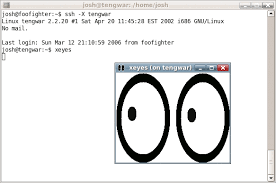 GNOME is one of the few DEs i havent tried yet due to the mobile centrisct feel im getting from it, tho the extension system kind of reminds me of old XUL and how it broke many addons with every mayor firefox release.

due to the mobile centrisct feel im getting from it

That’s what turns me off about Gnome!

Not a fan of Kirigami either then eh? … runs away

22 years with GNOME, I don’t think I intend to change, I saw several changes during that time and what I can say is that even with the mistakes and successes GNOME remains firm and strong for those who really want to use something different from traditional.

for the desktop they focused more on keyboard being used for GNOME than the mouse pointer. I can understand people getting a mobile feel though as its trying to be both. I mostly use the keyboard to navigate so I really enjoy it but we will see where they go in the future as my opinion may change.

I’m a desktop user. No mobile for me if i can help it.