Get the fish outta here.

Alright. Thanks to @dalto the other day → I’ve decided to rid my system of fish. It’s not been nearly as easy as I had hoped. I’ve had to timeshift several times again.

Problem: every time I remove fish with yay -R fish I no longer have access to TTY or konsole. Konsole will launch long enough to see it on the task bar and immediately dissappear. In a TTY, I’m able to enter my user name, it asks for my password, and then immediately returns to ask for my user again.

Per their uninstall FAQ: 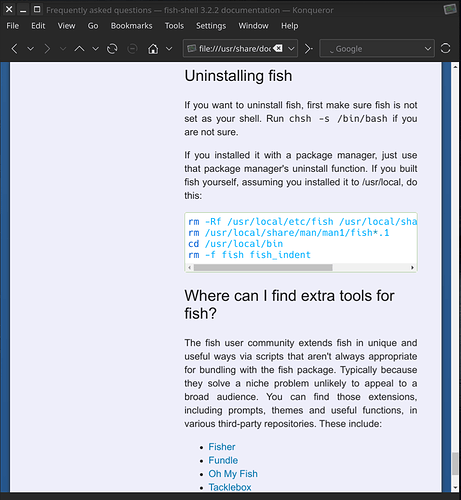 So my first step:

At this point I’ve tried a number of things → but this is where I currently am. 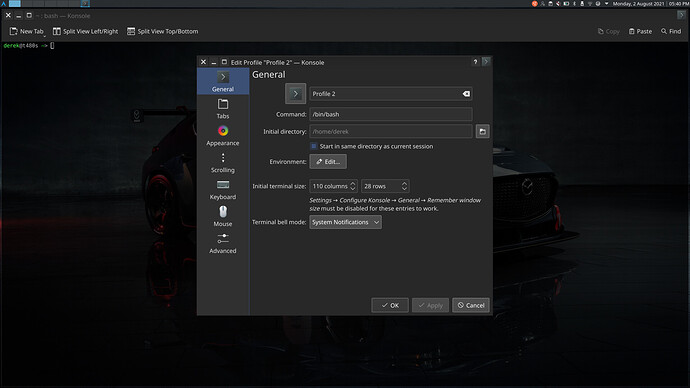 If I open konsole or TTY now, it STILL comes up with fish. Now here’s where I keep getting stuck. I have tried before a restart, after a restart, still in fish, and exiting fish with /bin/bash

It goes through no problem. Executed fine and uninstalls.

EVERY SINGLE time I uninstall it → I’m left in a disaster. I Immediately no longer have use of Konsole or TTY. I have had to timeshift backup (via the app → timeshift --restore is unavailable since I have no way of using pacman). Root password still works - because I can still use timeshift/gparted. User password still works as I can log in no problem.

I’m on a fresh timeshift. The ONLY thing I’ve done so far is step one - chsh -s /bin/bash

EDIT: If applicable: I changed this to my default shell following their help guide as follows. 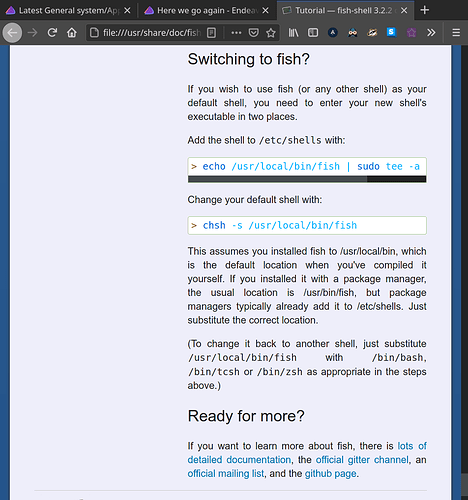 Also - In complete disclosure → this is Arch(fi) KDE, not EOS.

It must still have the hook in it’s mouth?

Make sure you aren’t launching fish in your .bashrc and that konsole is not set to open fish in your konsole profile.

Konsole profiles both 1 and 2: 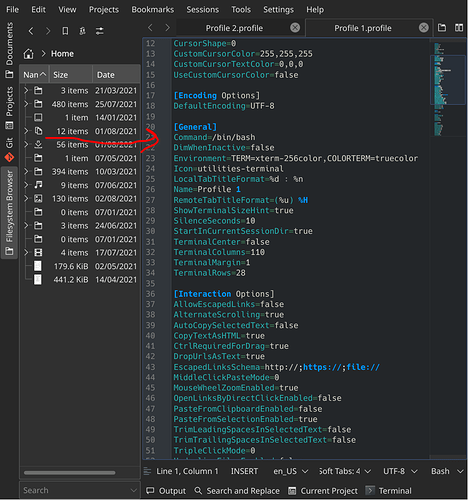 .bashrc has one line:

/etc/profile is as follows:

Is this my problem?

Just flat out remove them?

Edit: I got tired of waiting for you. I tried it. . . and Konsole pulls up in bash (thank f*cking God, I’m so tired of seeing this nonsense.)

You’re a God amongst men.

Why the hell is that so difficult? No one should use fish ever. This thing sucks.

Just for reference, those 4 lines basically say, “If you are not already running fish, switch to fish.”

I know enough bits of code that exec fish meant that. But why would that not be part of the uninstall instructions? It’s like cancer.

I’m making a new timeshift backup now. I’ve got a lot of updates to go. My restore point was 6/1 just prior to the pacman 6 update. So I’ve got pacnew files, jack, etc to do again. But, at least my install was salvaged.

But why would that not be part of the uninstall instructions? It’s like cancer.

I have fish installed, and I don’t have this “execute fish” snippet in /etc/bash.bashrc. I wonder how it got there in the first place.

I use fish but I run it as an interactive shell. I didn’t switch the default shell it’s still bash shell I call fish from ~./bashrc using exec fish. It’s not a good idea to switch to fish as the default because it’s a bit different from the other shells.

Because of stupid Arch not very strict policies

Those scripts don’t run in your user’s shell. They shouldn’t break no matter what your user shell is.

That is a different issue. The issue there is if you replace /bin/sh with a different implementation, those scripts break because they aren’t POSIX compliant.

default word perhaps would be better though

I don’t know if there is such a thing as a system-wide shell, but if there is, changing it would still be OK.

The only way to trigger that issue is to replace /bin/sh with a different shell.

I wonder how it got there in the first place

I’m in a PM thread with a couple friends, and that’s one of the questions that keeps coming up. I absolutely cannot recall doing it but that doesn’t mean I didn’t. It would have been my third or fourth install at least because I never put anything new on my main machine without a successful run through on a practice machine. The reality is I must have done it somehow. The entire install process I did using their help manual. I don’t remember ever going to the wiki where I would have gotten that information.

But that’s a very good question and I don’t answer to it other than I must have done it I just don’t remember.

Reality is it’s my machine and the glory of arch is that it’s my fault. However it got there it was my fault and I should have known.

My complaint there was that some scripts from the Arch repos contain Bash-specific commands, yet their command interpreter is designated as #!/bin/sh which should only be used for strictly POSIX-compliant scripts. POSIX script is, of course, a subset of Bash, so all POSIX-compliant scripts will run with Bash, but on Arch one cannot (without a great deal of effort) use a more minimalist POSIX-compliant shell like Dash, because Dash will error on Bash-specific commands. Since Dash is up to four times faster than Bash, I would like to use it as /bin/sh, but alas, it is not meant to be on Arch, since some script authors rely on the fact that on Arch /bin/sh is Bash.

This has nothing to so with Fish, though, which is specifically an interactive shell which is not POSIX-compliant. Symlinking Fish as /bin/sh would be incredibly stupid and would break all scripts on your system, regardless whether they are strictly POSIX-compliant (like on Debian), or contain Bashisms, like on Arch.

When we fish we “ALWAYS” blame the bait!