Which DE is best with fractional scaling? but not only that, also at setting different scaling per monitor?
like a lot of people I have a laptop with a high resolution and I need a 125% scaling to be usable (or maybe I am getting old…), and I frequently need to connect to monitors on which I would like to set the scaling at 100%

Cinnamon that seems to handle that natively? Gnome Wayland but with memory issues?
or maybe another solution …
what is you feedback on this?

Out of the box only:

But fractional scaling is troublesome for almost all of DEs, especially when it comes to per-monitor scaling…That’s a shame

P.S. Haven’t tried Cinnamon for a long while, but it seems it can do fractional as you’ve said: 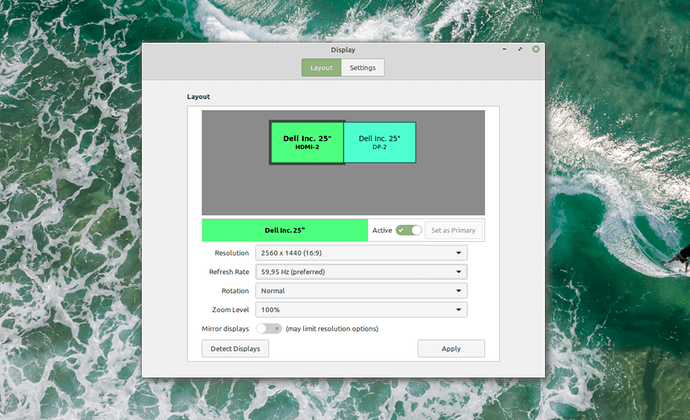 Using the Cinnamon desktop environment on a high-resolution display? If so, you may be pretty excited to hear that fractional scaling support is on the way.

and will allow different scaling values to be set for each connected display.

Seems you should try it out

In my DE hopping, and as someone who regularly used their TV with their computer, KDE Plasma is by far the best fractional scaling in my experience as of late.

I tried the Cinnamon scaling and it sucks. What it does (in my case) is rendering the desktop at 4K but the UI at (2560x1440, 150%) for example and you can tell since the font/text looks blurry.

In Deepin it was, but…well…

Really?
Last time i’ve tried some text still looked blurry and scaling of few elements was off too…

I mean, better than nothing, but still far from perfect. Maybe i should retry it with latest updates

The new Xfce 4.16 coming soon is supposed to have support for Fractional scaling.

Xfce 4.16 finally introduces fractional scaling for your high-resolution displays with the support of XRandR (resize and rotate). The display dialog has the 1x, 2x, 1.5x, and custom scaling options available.

I’ll try cinnamon, I am not using a 4k monitor so maybe it will work for me

so I tried Cinnamon and it works pretty well, you have fractional scaling and you can setup it per monitor
but it gets a little bit blurry on the screen that is scaled at 125 %, it’s usable though
if they can fix that it would be perfect

on my quest of looking for the best DE for this, Pop OS won
I don’t know how they do this but even if it’s using x11 it works like a charm, and no intense CPU usage
so for now I will use Pop OS on my work laptop