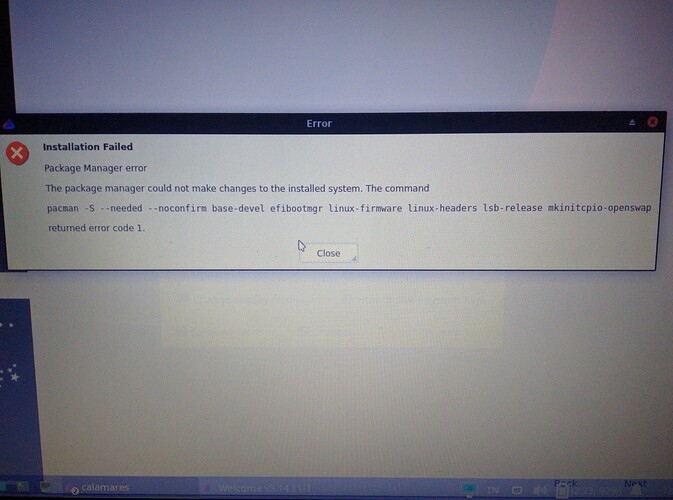 How did you partition?

You should get a log with more information also other than that error popup. Also you can try to refresh mirrors before starting the installer, often that’s the problem.

It appears you have done a legacy install on efi. Is the device really old and not uefi compatable?

The installer is looking for a /boot/efi partition which you have not created.

Prior to this I have installed Ubuntu, Manjaro, Garuda, PopOS and i3 EndeavourOS. And they all were installed without an error. I created the same 512mb partion for them too with fat32 file system and /boot flag.

Right I found something. Package manager error in online install (offline is failing too)

I am having the same problem as this guy. People are suggesting to uncheck that hwinfo~ish package at the time of installation. I will try to do that once I am home.

Have you updated pacman mirrors before to launch the EndeavourOS installer ? I had a hard time with EOS install today because i tried to install it without updating mirrors (actual iso is a bit old…).

No I did not.
I just tried unchecking that hwinfo~ish package and the installation was a success.

But there is one thing that is bugging me that is at the time of installation the calamares installer said something like “Your device is not compatible with EOS although it might get successfully installed but some features might not work for you” this is the first time some linux installer has said this type of thing to me. although the installation is working good right now but I am not too sure as not a lot time has passed yet after I have done the installation.

Please look if this is that “feature might not work” thing that calamares was talking about or just a linux command line rookie mistake.

@BONK please read my above message and tell should I redo my installation with a new flash drive or is every thing good. I need to hear from a Pro like you that “everything looks okay, you are good to go” so my mind will stop bugging me and I will have a good sleep. thank you

Add packages to be installed in addition to Desktop chosen

Since the ISO publication of March 2021, there has been the option of entering additional packages in a list, which will then be installed in addition to the selected desktop environment. This will…

And if you were trying to run this pacman commands from live session how they should work for you at all? the would only install the packages for the current livesession. ?

the command to install from a given packages list on installed system would be that:
pacman -Sy --needed --noconfirm - < /path/to/pkglistfile

And if you were trying to run this pacman commands from live session how they should work for you at all? the would only install the packages for the current livesession. ?

No, I was installing pkgs with in installed system.

the command to install from a given packages list on installed system would be that:
pacman -Sy --needed --noconfirm - < /path/to/pkglistfile

This command it actually worked

But I have used these commands in the past

and they also have worked as expected only this time they did not worked. Also your command looks similar to mine except that y and --noconfirm tag.

Anyway thank you for these replies they have helped me. Also I will take above reply as your word that I don’t need to redo my endevourOS installation.

-y will reload package database and yea --noconfirm will not ask for confirmation.
I see also that due to pacman changes some commands for pkglists do not work on changes from time to time… and pacman do not like whitespace in the list file:

will fail if there are such…

I would not say your issue is the exactly the same… if you do to wanted to install extra packages from a packages list?

the error is caused by failing to fetch packages… which is in most cases an issue with failing mirrors or a very slow connection.

And in 99% of cases you can sole it by manually rank a mirror list before start install from welcome app.
And make sure to add nearby countries, and if you are in countries like India Pakistan or somewhere with only very little amount of available mirrors it is known to be working by adding US and German mirrors to the list. (checking these countries in addition).