From what I see out there, it appears that EOS is having an influence on others out there is distro land. It seems that ArcoLinux has made some changes in their installation system and variants, and it looks strangely familiar: 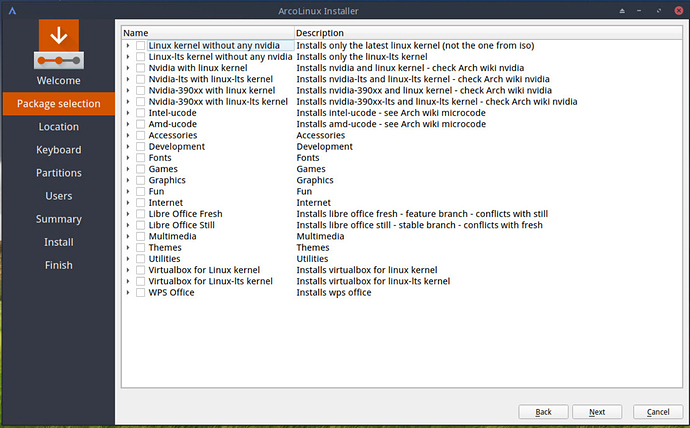 arco-install1365×847 346 KB
They have also a version with multiple desktops and WM’s using the same look and feel - so I guess EOS has brought improvement to the ecosphere!

Now, of course, we can see if any of their ideas will fly here…

We were first one to use the online Calamares function, so now it will show on other distros also. Well, we all use the same installer, so…

What function would you like to seap in over here?

I haven’t been through all of the permutations over there - but they have implemented the choice of kernels, the microcode, and video drivers to mention a few that have come up here in discussions before. They also incorporated more than the online installer into their operation - Welcome has fans too, apparently! I guess we can hope that a rising tide floats all boats, or as some would put it Eine steigende Flut schwimmt alle Boote.

After install the unnecessary packages like microcode is being removed automatically. As for the video drivers, this is a discussion we internally also have, the problem is that a lot of users don’t know which driver they should pick before install.
The Nvidia-installer does this automatically and there’s also the issue with the Hybrid cards, which is a linux wide problem.

As for the Kernels, we are working on that and we will present a new feature on the July release concerning this.

Well - it might be worth a look to see if there’s anything good there. I don’t think I’ll worry about it too much though - their real strength is the scripts for building systems up from after installs!

They also incorporated more than the online installer into their operation

Don’t forget thet they offer a more bloated system on one of their ISOs, I keep forgetting the names, since i get lost on their website.
I’m not trying to burn them down in any way.

Neither am I - but they invented the bloated Arch-based system! As I understand it, they offer a ‘basic’ system with XFCE, OpenBox and i3 - then they show you how to build your own ISO, customized in ArcolinuxB - the you can choose to go with Arcolinux D which is bare bones, and then run scripts to build it up. It is good place to learn - but, like school, I wouldn’t want to stay there too long!

I love their philosophy…

EDIT: I’ve edited my answer, since my opinion might lead to speculations that aren’t there in the first place.

eric is a teacher

It is good place to learn - but, like school, I wouldn’t want to stay there too long!

What? Installing Arch “The Arch Way” is Phase 5?

They website made me think that Arch is really so complicated.

Endeavour allows you to learn at your own pace while helping and supporting you along the way. And I learn much better with good documentation, never liked video tutorials tbh…
What is their philosophy?

I can’t imagine following their roadmap in detail - but the pieces are there if you can find it in writing rather than video! I’ve done some teaching along the way… I’ve decided lesson plans are for before you begin - reality dictates what’s really needed along the way.
I guess the philosophy is that Arch is good, and that most of us need some help to not mess up!

I think, alot of EndeavourOS people are more learning while doing, like myself. if it runs, it runs, if there’s a problem, let me look it up in a wiki and find the command to fix it.

Arco people like that handholding learning path, to prevent making a mistake, instead of learning from your mistakes, again like I am. it’s a different way of looking at things.

I think the trick is to get a running system in the first place - then go make mistakes and fix them! EOS is the best at that I’ve found - especially because some friendly help is available for those fixes!

I agree. I like Arco linux but i do not like their website and the bloated ISO installs. I find it just too over the top. Too much information all at once.

They website made me think that Arch is really so complicated.

This is my opinion too. I don’t have an issue with their installer or the process. Now it’s much the same as EOS with just more. Is more better? Not really.

especially because some friendly help is available for those fixes!

That is the point for a good and soon learning!

Too much information all at once.

Luckily, most of the time you can find enough of an explanation accompanying/explaining the vid to skip watching it

You have to respect the effort they (he?) put into it though!

A post was split to a new topic: AMD 3800X/RX5700XT not working on EndeavourOS

This is gratifying when EOS has reached a level of sophistication that can already affect other distributions.

Who so, who so, that’s what they say. The path of truth is not paved.