I’m having a massive performance regression with Nvidia 510. Games run perfectly for 4-5 minutes and then slowly drop down to 0fps while MS go up like crazy. I don’t remember this issue in 495. 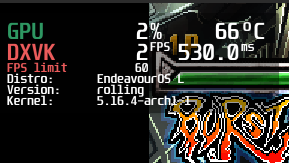 It’s not too surprising there are some regressions given NVIDIA’s track record. 470xx remains an option as an alternative to the 510xx series.

I’m going full AMD on my next PC.
How can I revert back to a previous Nvidia version? Although I’m gonna miss the brightness level control.

Apparently downgrading to linux lts (5.15) fixed my issue. My guess is that 5.16 does not play well with btrfs file systems.

Updated to 5.16 and still had issues, reverted back to lts and STILL had the same issue…
So this gotta be an Nvidia issue. How can I revert back to 495?

What is your graphics card?

So it’s a laptop then with hybrid graphics? Are you using optimus-manager?

Nope, it uses Intel for CPU and Nvidia for GPU. It’s not compatible with Optimus. It’s a laptop yeah.

Are you able to use the downgrade command?

Whats the downgrade command for nvidia if I may ask? Would it let me downgrade to 495?

Downgrade is a package. It has to be installed. Then use i think

It requires nvidia-utils=495.46 which I do not have apparently.

Are you using the dkms version?

I think so yeah.

Updated to 5.16 and still had issues, reverted back to lts and STILL had the same issue…

An issue with BTRFS is not related to the NVIDIA driver.

So this gotta be an Nvidia issue.

I’m not sure why suspected BTRFS was an issue in the first place?

You’re right, after downgrading to 495 the problem still persists. It’s an BTRFS issue and I don’t know how to fix it. What can I do? I’m starting to get a little frustrated.

How do you know for certain? That is, what are you basing this on?