Without watching this video. I bet my ass whoever did that video, puts Manjarno at #1. And therfor has no clue whats wrong with that distro.

If Arch isn’t the best Arch based distro the entire video is even more worthless than Reddit… . .

I mean, to be fair. The video is about Arch BASED Distros. So, it wouldn’t make sense to put Arch in it. Just like nobody would put Ubuntu at number 1 in an Ubuntu-Based Top 5 video, I guess.

No Arch is Arch. It is not based on anything.

He also knocked lxqt and the minimal installation theming if EOS. . .

Does he also run distro watch?

I really need to get on my YouTube channel

I don’t know, didn’t watch the video, I also don’t know that person or their channel. Never seen before. I am just waiting for someone to tell me that Manjarno was put on place number 1, just so I can laugh my ass off.

I mean, not sure why that person would say negative stuff about EOS, that it is minimalistic. Doesn’t make sense to me.

You have one?? Send us a link. I’ll subscribe

Manjaro was indeed number 1 even though his favorite was Arco Linux. He even daily drives Arco Linux.

I made a joke a while back where I said I was going to start my own YouTube where I just drink tequila and slam all the terrible YouTubers and Linux distros out there.

I got an unbelievable amount of people who said they would subscribe lol.

Maybe I will actually do it.

This sounds like an excellent idea. At the very least it would be genuine and I think many people would indeed enjoy it.

This guy kind of triggered me EndeavourOS pub

I think I’m going to start doing youtube LInux videos. It’ll be me and a glass of tequila and I’m just going to slam distros and Linux reviewers. You know what’s great about this distro? You don’t have to f* * ing use it. Flash that s * *t right to your worst USB and hurl it right into the bin and go out with your friends to the bar and get another beer.

You have one?? Send us a link. I’ll subscribe

Me? A youtube channel? Nah, I don’t have one. But thanks for offering to sub to it.

(edit:)nvm you meant the other person, not me.

Manjaro was indeed number 1 even though his favorite was Arco Linux. He even daily drives Arco Linux.

Yeh was kinda obvious. But what I do not understand, when is fav Distro is Arco, why did he put Manjaro at number 1? So, he tried to make a Top 5 for general public and use and not his own personal top 5?

I remember this, this was in response to the Youtuber who didn’t even know that

ships only a themed Xfce and i3. People don’t even do research before making videos.

Yeh that is true. They wake up on Tuesday, go to toilette and do a shit and have a thought about “hey I will do a Linux Top 5 distro video” then wash hands and sit at PC and start recording it.

Anyway, we’re off topic. I’m going to leave it at that for now. Just more material for me.

Garuda is on my “too look at” distro list

For what Manjaro sets out to be, it’s very good. I installed it to my dad’s Raspberry Pi. That being said, I’m good with EndeavourOS. 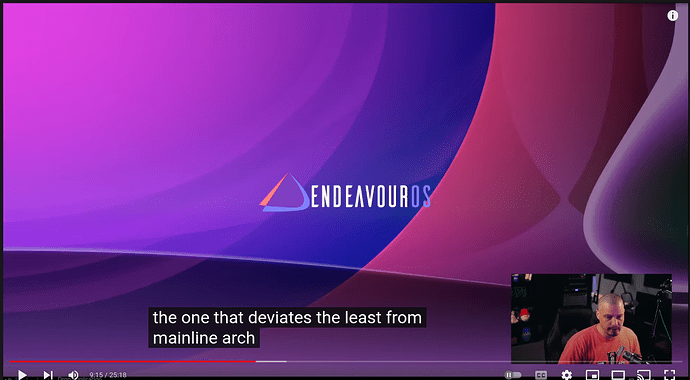