Obviousliy there are some problems with the latest kernel (at least with other distributions). It looks like some Intel wifi chipsets are causing serious trouble (iwlwifi). Are there some similar problems known in Arch?

also bluetooth
and may be audio

if something happend you always to use your system with lts.

and may be audio

5.10 has been a clustermess, which is not great for an LTS kernel. A lot of 5.11 backporting will be required to fix.

Not just regressions, but serious regressions that can break systems and corrupt file systems (ie F2FS).

Some people new(ish) to Linux are under the illusion BTRFS is a stable, production ready CoW FS equivalent to ZFS … it is not. Not by a long way.

At the same time Fedora has officially moved over to Btrfs as of Fedora 33 and Suse has used it for what? 5 years now? And Suse’s users swear by it.

Besides knowing how much Fedora / RHL is involved in the upstream it is very confusing why 5.10 is such a mess.

if something happend you always to use your system with lts.

…I installed it this morng, running Zen as default and LTS as backup now.

Because I’ve been using openSUSE for quite some time (still have it installed as dual boot) and I’m still kind of active in one german forum, I know some guys using openSUSE (Leap and Tumbleweed). I know it’s working very reliable there with Btrfs. openSUSE uses snapper as default (Btrfs as /, Xfs as home). The latest kernel (5.10) is already available in the kernel stable repository (has to be added manually for Leap). Will be interesting to see when/if issues will arise.
As far as I know issues, at the moment, are limited to Wifi.

5.10.3 is now on Archlinux testing repositories. 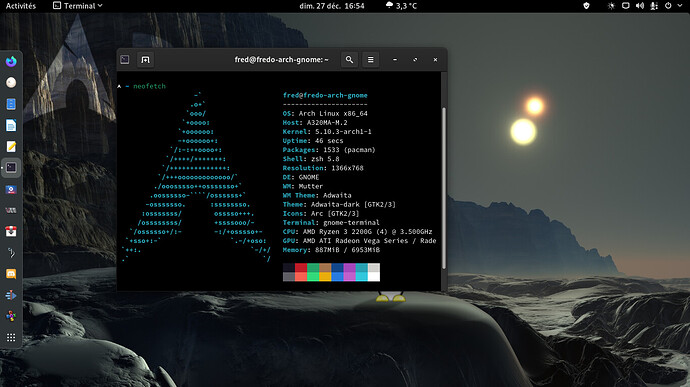 I think I read today that the issues still couldn’t be resolved in 5.10.3.

Fedora are also defaulting to Wayland with their KDE spin, which is still a mess.

As far as I know issues, at the moment, are limited to Wifi.

The issues are more than intel wifi, which has been serious enough.

it is very confusing why 5.10 is such a mess

It was (again) the biggest release to date, and (AFAICT) as an LTS there will be a lot of changes pushed to try and have them in place ready for the next five years (or whatever) of maintenance.

I am using 5.10 already since 5.10.1 and I have tested various kernel flavors, incl. linux-zen and linux-tkg-bmq. I have had no issue so far with ryzen and amd gpu.

No need to rush to 5.10 as the 5.10.4-rc1 is quite a bit larger than typical maintenance releases. No doubt the holiday season delayed some of the changes, but I’ll definitely wait for 5.10.5 before updating! Besides, I’m playing with 5.11-rc1 on my baytrail.