You can, if using multiple kernels, select the default boot option in control center>general. 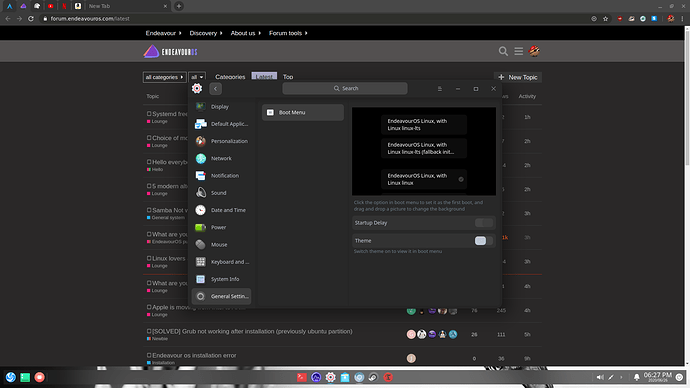 You can also chose to remove the grub delay timer as well as the theme.

Deepin has some interesting keybindings, for example F11

It can full screen your terminal and your browser (I use chromium, it also works on firefox) 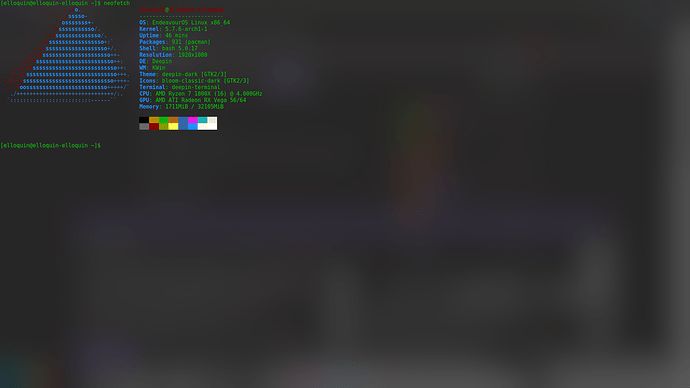 It can full screen your terminal and your browse

in I3wm I can do same thing

).
I only discovered it at all after you posted a workaround for the dock issues…

I’ve been using the Boot Menu, but didn’t know about F11 shortcut

They have updated quake terminal. Previously you could not resize the window. This is possible now by simply using the mouse to drag the bottom of the window. It also remembers how it has been set upon re-Iaunch. I haven’t yet tried to see if it can be bound to a hotkey and used as a drop down similar to yakuake.

They have updated quake terminal.

Doesn’t seem to be resizable though… Unless I missed something (I’ve been mostly using dwm lately).

It could be my bad. I forgot I installed system settings. That might be why the window is resizeable for me. Nothing broke on my system doing it but ymmv.

Yes sorry was on my phone and a pain to do this : systemsettings

Use at your own risk and it pulls quite alot of dependencies with it. Back on version 15 you needed it to fix a grainyness issue with the panels.

Use at your own risk and it pulls quite alot of dependencies with it.

Unfortunately, it doesn’t seem to work, the quake is still the same (I did reboot

). Deepin is weird, maybe it is just not working for me for whatever reason.

I’ll look a bit later for you when I get home. 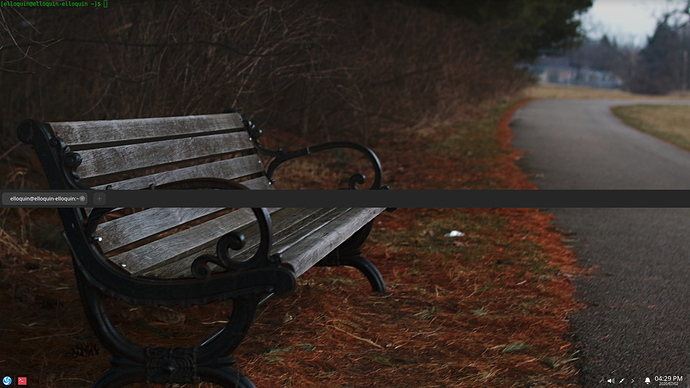 Hmm…well, not for me. I will be reinstalling the system anyways (with Deepin as DE), maybe it is going to work after that…

I’m giving up dealing with some stuff works and other stuff doesn’t. 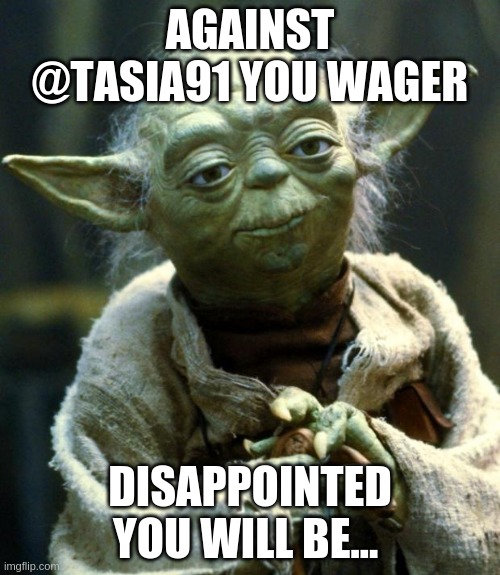 @Elloquin
I wish it was like the version 15 which worked no problem. Everything worked and matter of fact even Htop worked. I’m sooooo disappointed. Who works on this for Arch?

@felixonmars he posts on the manjaro forums now. I really think it’s a driver thing on your end since turning off window effects (which is really the kwin compositor) breaks your system. You can also ping a user named @ant over there (not the same as here) he’s very knowledgeable.

The issue, as I understand it, is that the Deepin drops one version and focuses solely on the next. This works fine for them because they are not on a rolling base. Once v15 works, it will always work until they re-base. v15 was archived while they were working on 20.

On Arch, that doesn’t work and eventually felixonmars felt like he had no choice but to switch to 20. However, calling 20 beta software seems fairly generous. There are a lot of bugs and they are still implementing features.

If you want to report bugs, the right place is probably here:

Here is a recent quote from felixonmars on the subject of trying to get v15 running in a maintainable fashion on Arch. For context, it was in response to someone claiming that switching to version 20 was not the Arch way:

You are not going anywhere investing lots of time on doing porting work for the old version, which receives zero upstream support, relies on archived git repos, needs quite some patching which is not useful later, and is absolutely not the Arch way even further.

We don’t package obsolete software and maintain tons of downstream patches for a dead branch that are not possible to merge upstream. That was what I did for months before this V20 beta, and I had no choice at that time.

Please don’t get Tasia after me. I promise I’ll be good!

I haven’t yet tried to see if it can be bound to a hotkey and used as a drop down similar to yakuake.

This can be done as well. I bound the default keyboard shortcut for quake terminal in control center to F12 works just like yakuake behaviour.

@Elloquin
Okay so now i am running Deepin without Windows effects on the latest kernel and updated virtualbox. So far it’s not freezing yet! The minimize feature is also working. Htop still doesn’t launch i guess unless you install Gnome terminal? Multitasking view requires window effect to be on but doesn’t work when it is on and then the minimize doesn’t work properly. So this is better as it’s not freezing!
The other issue is when you open the EndeavourOS log tool you get multiple icons in tray that won’t close.