I recently installed endeavour and now have a problem that I did not have in the live environment. My broadcom card is not bringing up both NIC ports. The second port gives me the following message in dmesg when I boot my system and says that the port is not connected.

Any ideas on how to resolve this issue?

Are you able to post the link for this command.

Modules are loaded. I see 3 ethernet?

Correct. It sees enp6s0f1, but due to that firmware issue it looks like it won’t bring the port up. It worked fine in the live iso environment though. Has there been a module or firmware change recently that would have caused this? I tried two different linux firmware bundles and neither one worked.

Thank you! Great to be here.

I tried two different linux firmware bundles and neither one worked.

Did you install the linux-firmware-bnx2x package? 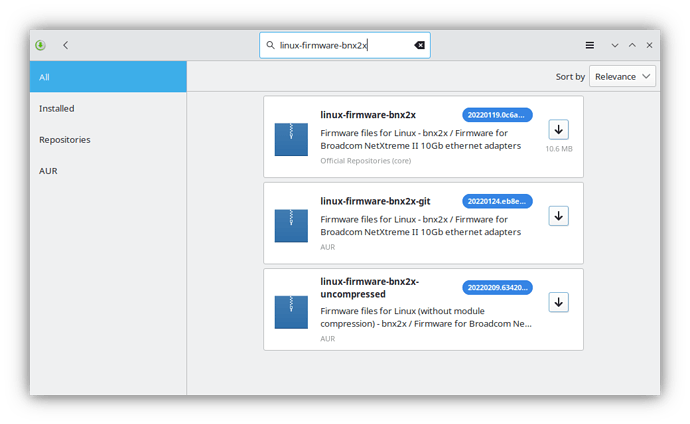 Worst case I can get by with one cable, but I would like my card to work like it used to work.

I am debating if I should try a different OS so I can see if there is something on the card firmware that is broken.

The live ISO would have a different kernel? I’m not sure if the firmware is same either?

There is a new firmware version in testing?

Edit: You can download it from the mirror and try it.

This is the link to the one in testing correct?

Yes it shows download from mirror on the right or however you get it and you could try it?

Yes, tried it. The issue still remains. Same message in dmesg too.

Well i wonder if it’s a kernel issue or firmware? Have you tried it with any other kernels? lts or even zen? It’s easy to install another kernel using akm. It is a kernel manager. You can install it either with commands or from the welcome app. It allows you to install and remove a kernel easily.

I swapped my twinax cables between the ports and the issue is not following the cable. It is staying with the second port on the card. Dmesg is showing that a firmware mismatch is disabling it. I just don’t know from where.

Let see if I can try a different kernel from akm and see if that solves the issue.