Today I noticed my working system (EndeavourOS Gnome) memory usage reached about 90% (of 32GB) with only a few apps open. Normally it’s about 50%. Then I checked system monitor and found Brave browser consumes hugh part of it. 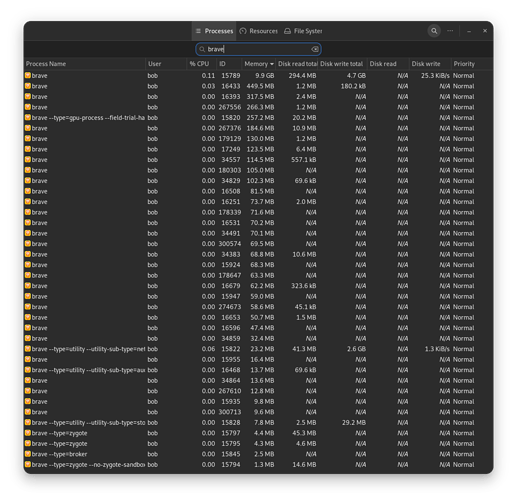 I rebooted my computer and restored Brave with the same tabs. It started at 2.5GB RAM. I opened the same tabs with Chromium and it took 2.2GB. I left both idle for an hour, Chromium still remained at 2.2GB, but Brave became 3.1GB. So it seems that Brave leaks memory all the time.

Although it is possible, it probably isn’t leaking memory, it is more likely just the way memory management is handled on Linux. Generally speaking, Linux will use memory if it is available and if you have a lot of RAM, applications will use it. That view isn’t showing you how much of the memory usage is shared memory or how much your used memory is consumed by buffers.

High amounts of memory usage(within reason) isn’t definitively bad in Linux. As long as your applications are running and you aren’t swapping heavily it usually isn’t anything to worry about it. I have 64GB of RAM on my primary workstation and it isn’t uncommon for each browser to be consuming 3-6GB of RAM when they have been open for an extended period of time. Especially the Chromium-based browsers. I would bet that if you opened a memory hungry application at the point at which your RAM was 90% consumed, your RAM usage would not have increased much but the application would have opened and ran just fine.

Take a look at this link as well:
https://www.linuxatemyram.com/

How about disk write 4.7 Gb from same thread?

How about disk write 4.7 Gb from same thread?

That is quite interesting/concerning. I would typically make a comment about not trusting Brave in this situation but I am not awake enough to do so.

@bob418 are you running any extensions?

I believe it’s only Brave’s fault. I tested the same extensions (or more) and same tabs on Chromium, Chrome and Edge (dev version). All are fine. Chrome and Edge even reduced RAM usage after 1 hour idle.

And here’s great sumary on why