Both Mousepad and Xed? Also bluetooth?

Question: I did a new install today (don’t ask) and noticed that in the webinstaller for Xfce we have both Mousepad AND Xed? Why?

Also, why is bluetooth enabled in the webinstall when the offline install specifically make a point of BT NOT being enabled by default?

in some preferences you can use sudo xed (wateverneed.conf) , mousepad comes from xfce4 group… doesnt do sudo mousepad. only sudo dbus-launch mousepad.

because arch changed dbus , as manjaro stick with dbus-x11

edit ; as bluetooth have no clue but was also installed?

edit ; as bluetooth have no clue but was also installed?

Yep. Bluetooth is installed by default in the Xfce net install apparently.

Installed, but NOT activated (started or enabled). I am sure just trying to keep things as simple as possible.

Speaking as a desktop user, I am happy it is not enabled - and I don’t care enough about the disk space to remove them…

Installed, but NOT activated (started or enabled). I am sure just trying to keep things as simple as possible.

It was activated for me, that’s why I reacted to it.

I’ll have to go through a few other installs to see if I can find one where that happened. It won’t be obvious to me without checking - as I’m on a desktop without Bluetooth capability…

On a fresh install

should say “inactive” and “disabled”. If it doesn’t something is wrong.

On a fresh install

should say “inactive” and “disabled”. If it doesn’t something is wrong.

Exactly my point. Might be because if you look in the webinstall for Xfce, Blueman is CHECKED by default and yes, when I booted in first time the bluetooth icon was showing in the panel by default and indeed when clicking on it it immediately started searching for appliances to pair with so it definitely was turned on.

Which image file did you download? Did you check the SHA512 sum?

The fact that bluetooth icon shows means nothing. The icon can show even if the service is disabled.

I did an Online install so the ISO was fron September, but I updated the Installer then chose Online Install.

And blueman should not be installed by default (but it was checked under the Xfce options as part of Xfce, I checked because I always UNcheck the Xfce media player, I never use it), it is one of the options in the welcome app to install after the fact if you want bluetooth.

Last time, three weeks ago. I did an OFFline install and then Blueman was NOT installed by default.

Well, it did. I had to manually turn it off.

blueberry is installed for xfce4 per default (it is also the default bt-manager for Xfce4 integrating into the settings) Blueman is not installed.
see:
https://raw.githubusercontent.com/endeavouros-team/install-scripts/master/netinstall.yaml

On Live Session we do enable the following services:

It could be something changed on Arch packaging that enables BT if installed per default… but I do not see anything like that.

I will look into this now. 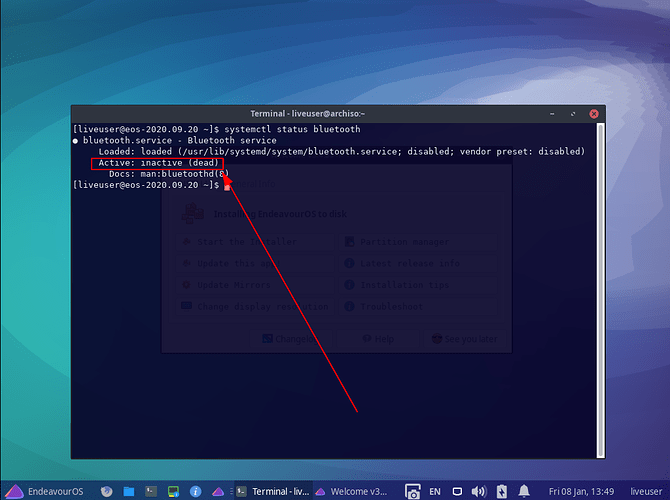 And on the two editors, I agree and I would like to remove mousepad and have xed there instead only, but mousepad is the default editor from xfce4… and still causing issues if used with root rights…
SO what to do? leaving it on mousepad only?

Correct me if I am wrong but I don’t think Linux is able to autostart services if you start an app, right? Unlike Windows? So it must have been running if I started Blueman and it didn’t complain about bluetooth services not running?

should not be installed per default and as it is not in the package list used for installation, i do not know how it can get installed…

Correct me if I am wrong but I don’t think Linux is able to autostart services if you start an app, right? Unlike Windows? So it must have been running if I started Blueman and it didn’t complain about bluetooth services not running?

and it is possible to start services with user rights, i do not know for bluetooth… but pulseaudio can do so and it does as you can see:

i just start a test install with the sept ISO updated welcome and do a xfce4 online install, we will see i do plu a BT dongle and on live session BT is disabled, waiting now to see installed system in some time.

And they still not solve the icon issue:

2021-01-08_16-231035×168 24.4 KB
we could set the bt tray to not be started in settings, what would be better then but if one does want BT then one does not have the tray…
In my opinion, it will be best to not install blueberry again, we add it as users were complaining a default BT manager was missing before…

Also it is that on online install there is only xed installed:

Caused by the cleaner script do uninstall mousepad, we do only forget to remove mousepad from the netinstall list…

It is from the version of the net install on the September ISO.

netinstall packages list will be fetched directly from GitHub, so the list is the same for all ISO’s
And i do test this with the same ISO from September (from my screenshots)