i see it is an ARM device

As far I know, EOS does not support ARM right now.
I’m sorry for you.

But who knows what the future brings…

Would a 32 bit-build based on archlinux32 be possible?

My wish in the back of my mind is to come with an ARM-based EndeavourOS in the future.

A post was merged into an existing topic: Terrapad 1061?

That would be nice, to have and EndeavourOS on my raspi and the rockpi. But i think it is a future wish which needs more devs to work on that.

You can go here and click on the Platforms tab at the top and see all ARM platforms that are supported. Select a Platform, then you will get Overview and Installation tabs. Installation tells how to install Arch Linux ARM (alarm)

I just installed alarm on an Odroid xu4. This gets you a base Arch Linux base install. Then like the Arch way, I installed xorg. Next LXQT, lightdm, and xf86-video-fbturbo-git which is the recommended software graphics accelerator for ARM as I understand it.

I am typing this post on Arch Arm LXQT in firefox. Here’s a screenshot 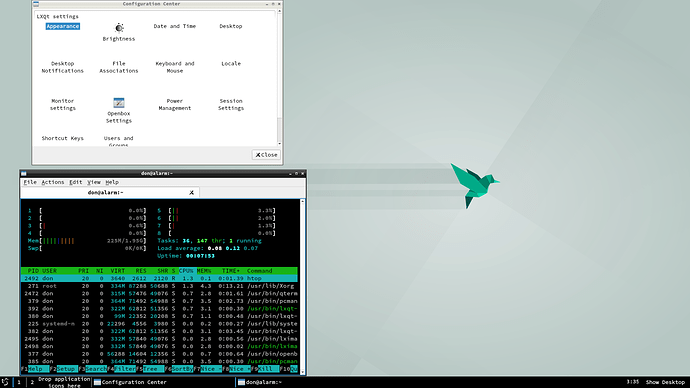 The Odroid XU4 is more powerful than the average Raspberry Pi, don’t know how it compares to RockPi 64 I assume. On the XU4 it is usable.

EDIT:
I am currently working on a project which MAY include installing a LAN server, or NAS if you will, on an Arch ARM device. This would also include an EndeavourOS base install for a x86_64 version of the LAN server.
@Bryanpwo Hint Hint

I would love to hear more on setting up a raspi (or odroid xu4) nas or nextcloud server using EndeavourOS. I’m sure there are people in this community who likes selfhosting and/or have privacy concerns. By the way, this can be extended to other tasks like pivpn, pihole etc.

Does something have changed? I couldn’t find anything yet about ARM technology and support of those.

I would love to use EndeavourOS for my Odroid C4. It can run with Ubuntu 20.04 Focal Fossa, but which distris too? I found ArchLinux, but i’m too stupid to use that.

We don’t have ARM support, none of the devs uses an ARM-based machine, which is key to develop for it.

i got a alarm in my power closed hanging on the router , what that thing only does? behing a quassel server for my irc client

install is not dificult… i thing basicly if there is some effort you can put a script where you can easy install a alarm on a sdcard more it isnt , only some finetuning of the user credentials is kinda a chrooting stuf but pitty as i am scripting brings my brain to execution

That’s sad. I searched for an efficient and power saving computer. So i found the HardKernel products. They are like raspberries. One of the products contains a celeron J4xxx processor and should be x86 compatible. But i guess its slow. So i will keep my computer for the next couple of months. Thank you.

@ringo thank you. But i have no experience in scripting or coding. I will search for an adequate replacement.

you have first to look for a correct image for your pi, its basicly unpack the image on a sd card and run it in short… but only with fdisk you have to prepare the sdcard first.

standard login and pasw is offcourse alarm you have to change it; its not so dificult actually. i know like respian has a gui for that offcourse.

See post 5 of this topic on where to find images for Arch Linux Arm. Once you install the image, you can download packages with pacman just like Arch Linux, except from Arch Linux Arm repositories. The packages available are quite extensive.

Shown in post 5 is a LXQT Desktop Environment on Arch Linux Arm on an Odroid XU4.

@cagri here is a how to on installing a simple LAN server on an Odroid XU4.
EndeavourOS_Server_ARM.pdf (293.4 KB)

You could follow that to install the image, then download any and all packages for a DE just like in pure Arch. I also have a how to for SSHFS, SAMBA, minidlna, backing up. I also installed PLEX server on the Odroid, but no how to.

here is the Arch Linux Arm download for the Odroid XU4 page
https://archlinuxarm.org/platforms/armv7/samsung/odroid-xu4

If EndeavourOS was to put out an EndeavourOS ARM, it would be basically the same as the Arch Linux Arm. The problem with Arm, every ARM based card, such as different models of Raspbery Pi, different models of Odroids, and all the rest of the Pi products, all need it’s own image. You don’t install the images with an ISO, you just simply use an existing computer. The best EndeavourOS could do is write some scripts to install DE’s once the Arch Linux Arm image is installed.

I will try to answer ARM questions the best I can, but my experience is with Odroid XU4.

Thank you @Pudge for your help. I have to buy your kind of xu odroid for using it right now. But i have to wait until they release it for odroid c4. Or i have to buy another device.

Can you tell me if your device xu4 is fast enough for daily usage? Watching movies, shows, series, netflix and Amazon prime?

You are correct, I don’t see an Arch Linux Arm image for the Odroid C4 yet.

The Odroid XU4 as my LAN server, or NAS if you prefer, is more than enough as a server for streaming movies(MP4), Audio, images, etc. I had PLEX server on it, and my son in Cologne Germany was streaming videos from my house in Colorado with no problems.

Based on that, I would say that as a HTPC the Odroid XU4 should work great up to 1080p. Not sure about 4k HDTV, you would have to check the specs on that.

I bought the Odroid XU4Q which has the passive heat sink. Then check the “how to for a simple LAN server” in the above post to see a picture of my Odroid. I bought a 5 VDC 40 millimeter fan and installed it with 4 nylon screws. The reason being, all fans eventually wear out. I believe the 40 mm fan would be easier to replace than the weird fan the Odroid XU4 has, plus I think my 40 mm fan moves more air over a larger heat surface area that the Q has. Runs cool as a cucumber.

Sounds like an amazing piece of hardware+software, very smart strategy.

Runs cool as a cucumber.

My pesonal experience using arm is with raspberry pi 3.

Initially I used rasparch, an easy way to set archlinux. Every now and then after an upgrade i had to do some adjust to fix weird behaviours.

After some months finally installed raspbian. I basically just watch videos on kodi, rarely update, no problems with it since then.

My opinion is to use default OS developed for the hardware on arm, specially the most exotic ones, unless you like to learn and want to play with it.

after cancelling my odroid C4, i want to give it a try with a raspberry 4 B with 4 GB RAM and a small case with integrated cooling (FLIRC) now. It should replace my desktop system. I think four gigabyte of ram could be a little bit of short.

I want to use Alarm and with your help @Pudge i hope i can do it. Have a lot of questions and probably problems with it. So i will order the new system when i know that you will support me, don’t want to sit here without help.

Do you think that this system can replace a full fledged desktop pc with an Intel Core i3 6100, 8 GB RAM and a ssd? I use the pc for listening to music, netflix and amazon prime, webstreams like youtube and internet things (browsing, chatting, surfing). Important i need a good not perfect sound. I heard of that the sound output of a raspberry is quite bad. Is this true?

I’m not a raspberry fanboy, so if hardkernel has another product in place, i need a good case for it, like the flirc one. You can tell me that the XU4Q is better, i will believe you and searching for that a case.

What do you think?

Do you think that this system can replace a full fledged desktop pc with an Intel Core i3 6100, 8 GB RAM and a ssd? I use the pc for listening to music, netflix and amazon prime, webstreams like youtube and internet things (browsing, chatting, surfing). Important i need a good not perfect sound. I heard of that the sound output of a raspberry is quite bad. Is this true?

I have never played around with any model of raspberry pi, so I do not know about sound quality, etc. @fernandomaroto says he watches videos on Kodi, maybe he could comment on sound and streaming quality on his Pi 3.

Is low power the main thing you are looking for? Or is experimenting with ARM more important. If you are looking for a low power HTPC and just casual daily usage as you listed above, check these x86_64 mother boards meant for HTPCs.
Low Power Embedded Mother Boards
Of the five available, here are the specs for the newest CPU
Intel celeron j4105 specs
Notice it’s TPD is only 10 watts. You can control how much RAM is installed, and you can use x86_64 OS’s. This can be put in a nice Mini ITX case
M350 mini itx case
use an eighty watt pico power supply
80 watt PicoPSU
and end up with this and a power brick. 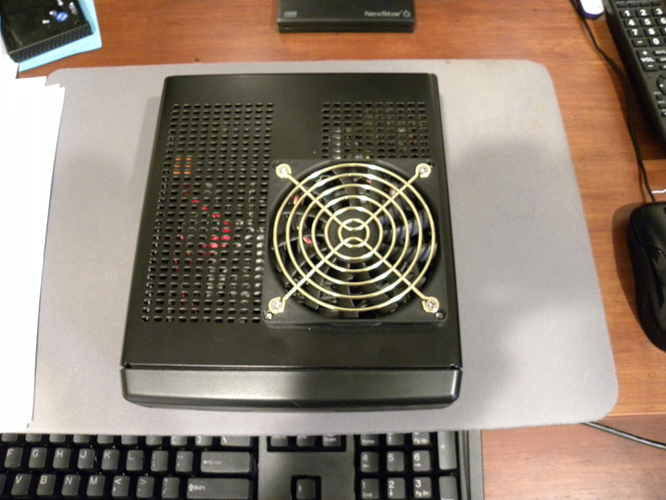 If your main goal is low power general purpose PC, go with the embedded solution. Not much more power, but it is more expensive.
If your main goal is to experiment with ARM, either the Odroid XU4 or the Raspberry Pi 4 B with 4 GB Ram will serve you well.

Of course I will help you as much as possible. Look over the
Arch Linux ARM installation instructions for Raspberry Pi 4
and see what’s involved. After that, it is pretty much exactly like Arch linux the Arch way.

If your main goal is low power general purpose PC, go with the embedded solution. Not much more power, but it is more expensive.
If your main goal is to experiment with ARM, either the Odroid XU4 or the Raspberry Pi 4 B with 4 GB Ram will serve you well.

It’s both. I want to learn about ARM and arch linux on arm and want to have a very low power pc for daily usage. I’m just scary about the low amount of ram and cpu power (4x 1.5 GHz or Exynos Octa-Core with 2 GHz and 1.7 GHz). Seems so low to me, but i guess for my usage it would be more than ok?

I took a look on the installation instructions, seems pretty hard to me but i will try it out. Is a Celeron J4105/J4205 so much faster and powerful compared to the ARM chips?

on your main machine you can do some practice

but configuring is lot work but basicly you put the install in Sdcard, as was my case.

got now a older pi; but i followed the instructions, fdisk the sdcard as it written, and unpacked the image…personal its straight forward.

the next is just the configuring thing what might needed and personal credentials.

I follow the instructions of the website of archlinuxarm raspberry 4 model b and after that creating space on the sd card and finally downloading and install the linux for arm. Is that all? Or what else do i Have to do?