Arch/Endeavour OS - Is it ACTUALLY unstable? A one year review!

Happy Birthday to my Arch install.

So, it seems so many times over the years I heard about the instability of Arch and Arch based distributions. So a year ago I set out on a goal of a complete 365 day installation of Arch Linux and treating it like I would assume an average user would. I have learned a lot about maintaining my computer in a way that non-stop distro hopping doesn’t really teach you. For a long time in my LInux career - if there was an issue - reinstall. Nuke and pave that baby and start over. It kept the computer feeling fresh, and allowed me to non-stop hop. XFCE, KDE, XFCE+i3, Cinnamon, XFCE, LXQT. . . . you get the idea. It was this non-stop “new” computer.

Approx 2018ish I found my way to Manjaro, and for the first time I finally kind of understood my computer. I never really understood APT, and I learned to LOATHE PPA’s.

Anyway. After a couple of years I was just getting decent at installing distros on my computer, but I never really felt like I was “maintaining” my computer.

So, early last year with the onset of covid and needing another project. I decided to install Arch Cinnamon, and said I will use this computer for a full year, no matter what. I used Linux Mint for years and Cinnamon is still my favorite openbox style DE. I said I’ll fix it, figure it out, break it, whatever. And to be honest. . . I didn’t. I was lazy.

There were a couple of months I didn’t even touch the computer. Recently I even purposely went 7 weeks without updating just to see what would happen and if pacman would break my install somehow. I’m sad to say after a year. . . I had no major issue what so ever. I took one timeshift snapshot during the first update of every month, and I never needed to use it. I updated sometimes weekly, sometimes monthly, and sometimes not even that often.

Anyway. With basic maintenance, timeshift, clearing the cache, removing outdated packages, clearing orphans, etc. I can safely say after a full year on the exact same install - Arch and Arch based distros are probably only unstable due to people breaking something trying to configure something else. If you’re looking for an OS to install and use, that is up to date, and you have even a vague amount of willingness to maintain your own computer - as I imagine most Arch/EOS users are - treat it nicely and it should last as long as you’re willing to let it keep rolling But I find it very difficult to believe all of the stories I read about on the net stating how unstable and dangerous Arch is for normal users. I would say it’s no more unstable than any other distro out there - GNOME updates, Fedora upgrades, hell - Windows updates. I’m very impressed with the work of this entire community, the devs here and the Arch community/devs. Thank you all!

If you distro hop like I (usually do) that may be a few days, if you just need to get work done some of you do, it could literally be years - I know a few of you, although I won’t call you out.

Reply with your computers birthday - 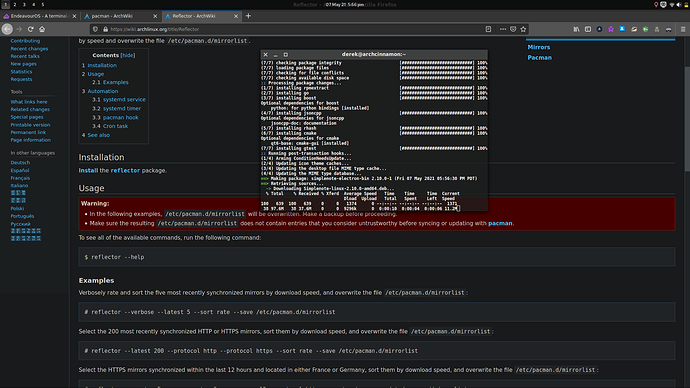 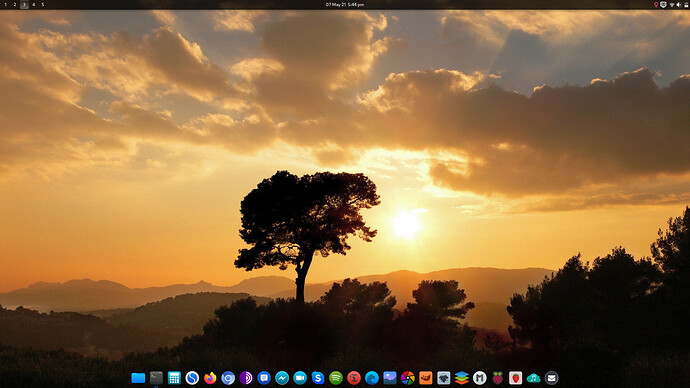 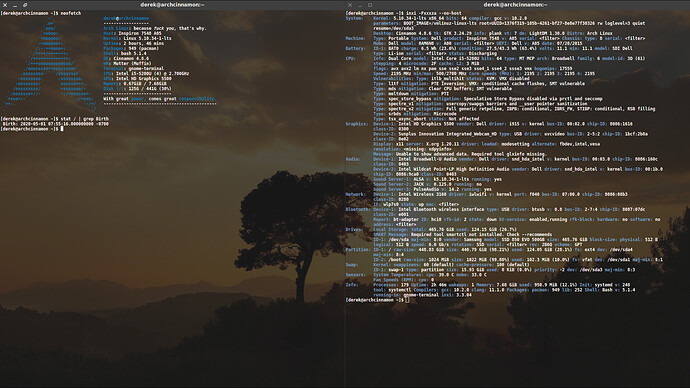 Congrats! That’s a good install! What DE if you don’t mind?

It was Cinnamon until about 5 months ago, now Plasma.

Having come from the land of Debian based *nixes, and getting thoroughly sick of the broken dependencies for something that was supposed to be stable, I am loving the Arch bleeding edge that is more stable than is purported. Way less problems, way more modern, all for the win. And EOS is my Arch drug of choice ( I had done Antergos and Arco before, and even Arch itself 15 years ago.)

I had no major issue what so ever

This is something I can agree with a thinkpad t490s or the like but I have another thinkpad with hybrid graphics intel/nvidia. It just can be a headache and there seems no way around it. And this independently of rolling release or other distro.

Am I assuming correctly that you did not have to deal with nvidia drivers? I wish I will do a year but seems I am a distro nuking addict.

I’ve had one issue that pushed me into reinstalling and that was because I tried an experimental kwin.

Since I use my machine for work, I have since avoided riskier choices and it’s been nice and stable.

I installed EndeavourOS thinking it is Arch based so it will break every three days. And I will fix it to learn new things about Linux distros. But no major issue till now. I never took snapshots, did partial upgrades of non core packages, but my PC still works.

This is something I can agree with a thinkpad t490s or the like but I have another thinkpad with hybrid graphics intel/nvidia. It just can be a headache and there seems no way around it. And this independently of rolling release or other distro.

I’ve been doing the Linux thing for a while now. I try to be more selective picking long term computers now. I avoid Nvidia. When I was younger I usually had AMD since it tended to be cheaper and I was poor, so it worked out well.

This is my first install of EndeavourOS on my oldest laptop Acer Aspire E15. It works as my media machine (connected permanently to my tv). No problems so far. I’m very pleased and will use this setup as long as possible.

I have also tried to avoid Nvidia when choosing laptops for linux installs. To stay on the safe side I have preferred Intel, because it has never caused any trouble to me. My newest laptop has AMD though, but it has worked well for me as well.

Hey, to be fair, home is in a separate partition, so whenever I want to switch desktops I just reinstall, sometimes distro-hop. This is because if I end up not liking it and want to go back, it often leaves packages that are hard to clean up… also, I only got this computer 3 months ago so I can’t compete with these long birth times

I can’t say I have had NO troubles with it, but I can say there were no troubles I didn’t cause myself!

It seems much more trouble-free than previous Ubuntu setups, and more up-to-date than MX-Linux (which is pretty stable, too).

Strangely enough, I have setup several arch-based builds - some of which have been replaced (2 Arco, 3 EnOS, 1 Garuda, 2 Arch) and those that have not (5 EnOS, 2 Arch, 1 Garuda) and I still can’t make them do anything wrong beyond what Arch news tells me about - and THAT was quite a while ago, as well as being insignificant. You will have to pry it from… etc.

This installation started out as antergos, and was migrated from spinning rust to SSD, and from intel to amd.
Somehow I managed to keep it going.

My laptop hasn’t been born yet, or just reincarnated.

So, tried something else…

This is EndeavourOS and I’m still using this install actively.
(If anyone is wondering, I removed the tail from the output.)

Recently I even purposely went 7 weeks without updating just to see what would happen and if pacman would break my install somehow. I’m sad to say after a year. . . I had no major issue what so ever. I took one timeshift snapshot during the first update of every month, and I never needed to use it. I updated sometimes weekly, sometimes monthly, and sometimes not even that often.

I had already forgotten that I have EndeavourOS LXQT install in other partition of my HP 250 notebook which I hadn’t updated for some time. Just for fun I decided to update it. The update was 4,5 GB size and the whole process went just fine. No hickups whatsoever. I just love Arch!..

but I can say there were no troubles I didn’t cause myself!

That’s the real point to be made by this and my big takeaway from doing the Linux thing for a while now.

The majority of problems I would say are caused by the user trying to do something and then not sure how to fix or continue from that point.

If you want your install to work and remain working in a fairly trouble free state. . . Stop breaking your own computer!

My laptop hasn’t been born yet, or just reincarnated

Interesting… did my command not work? Do you have grep installed?