I’m new to Linux, I installed it in July, after lurking these forums since April.

So today I was trying to re-install Linux onto my hard drive and accidentally reformatted my whole hard drive!! To Gpt… I now can’t see the D drive in my computer only C Dive (My SSD) and all my steam games have gone!! As they were on the hard drive!

When I went to system restore on my windows partition on my SSD. I also don’t have the option to restore the hard drive as its greyed out. Even though I can see it in disk management.
However, I have found a tool called easeus that allows you to restore the hard drive. I can see all my lost data being recovered in the tool as it scans my PC, but I think I’ll have to pay $70 if I want to recover it! Does anyone know how I can get my hard drive and steam games back!?

The safest way to do it would be to physically remove the drive from the computer and take it to a professional who does data recovery. They will tell you if that’s even possible in your case, and give you a quote. It may cost you a bit more than $70, though.

You could try doing it yourself, but if you have to ask on a forum about it, chances are pretty high you’re going to irreparably destroy your data, so only attempt it if the relatively high chance of failure is acceptable to you. A good, free Linux tool for data recovery is called testdisk and it’s fairly straightforward to use.

Hmm okay. I was hoping there might be some sort of command that could at least flag it up in disk management. Which would then allow me to retrieve it in system restore. Thank you for the reply though.

But since it just steam games, you can format it to GPT / ext4 and just download them with steam again…
Or GPT / NTFS if you still want to play them on Windows.

That’s the whole point of cloud

Well I was thinking to do that… To just reformat the whole of my hard drive to linux. And leave windows on the SSD and then reinstall my steam games/library on the hard drive/linux partition(s). But I’m worried some of my games may not work on the Linux partition which is why I kept the Windows partition and games in the first place. Well that and so the PC is easier for me to sell next year.

I’ll have to have a think… Option 1. Take PC to computer repair shop the minute it opens. Option 2. Go full steam ahead with Linux on hard drive…

Thanks for reply by the way.

And leave windows on the SSD and then reinstall my steam games/library on the hard drive/linux partition(s). But I’m worried some of my games may not work on the Linux partition which is why I kept the Windows partition and games in the first place. Well that and so the PC is easier for me to sell next year.

Oh, sorry i missed your point a little…

You can pretty safely use:

But i don’t think that:

No worries. Your point still makes sense. The D drive/HDD is no longer NTFS I accidentally reformatted it. Hence why windows no longer recognises it and my steam games on there have gone.

I could install Linux on the whole hard drive and change it to ext4, so my steam games can be put in the /home folder on there. But as I said my worry is not all games will work well on Linux even with proton tricks, steamplay etc. In which case it would be good to have those steam games back on my NTFS partition in hard drive. So I can play them on through Windows if need be.

As I said will have to think if I’m willing to give Linux gaming a go. Or, whether to take computer to PC shop get my games/windows partition back as a backup in case my games don’t work on linux.

@Kresimir okay so I’ve looked into testdisk and I think you’re right in that it seems like a good tool to use for partition recovery. However, there is a strong chance something could go wrong if I was to attempt to do it. As there’s no GUI and I’m not an advanced computer user.

So, I’m thinking to try and get a quote from a computer shop to see how much they would charge to recover the partition. Then I can take it from there. I’ve just spent £400 on numerous car repairs these last 2x days, so fingers crossed it’s not too much money.

It is a GUI program

the safest way to recover from the accidentally formatted drive is to create an image of it from booting LiveISO with common image tools (dd ddrescue clonezilla e.t.c.) then mount that image after removing rthe original drive from system, and start rescue filesystem/files from the mounted image, so the original drive is still untouched on the recovery actions…

Before to pay expensive way to recover your data, at least try the excellent Testdisk.

[Solved] An application to recovery data from a USB? Applications

You have the excellent Testdisk from Christophe Grenier to use on Terminal. Before to play with it, my advice would be to do an image of your USB with it by security then You could use it to recover your data without risk to loose… sudo pacman -S testdisk https://www.cgsecurity.org/wiki/TestDisk If you need only to recover pictures you could use PhotoRec on a faster way. These 2 Apps are powerfull. https://www.cgsecurity.org/wiki/PhotoRec

As recommended above, it is important to clone the affected drive first to another drive. That gives you the option to send the original drive to a data recovery specialist should you mess up.

I would advise using a Windows machine and QPhotoRec, the GUI version of PhotoRec. It is much simpler and safer to use in my opinion. I have used both systems in the past. 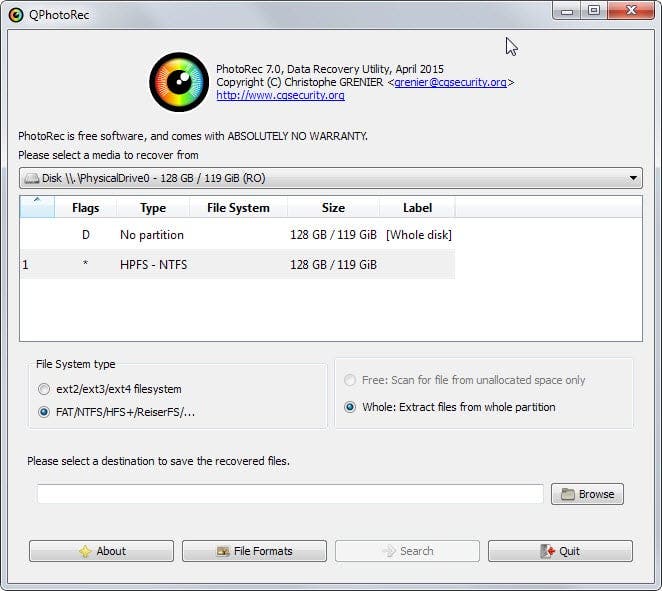 How to use PhotoRec GUI to recover lost digital photos and files - gHacks...

Find out how to recover digital photos and other files using PhotoRec, a file recovery software that is distributed with TestDisk.

Photorec doesn’t have the power of Testdisk that works on raw drive… and see really more. Photorec is good for recover photos for exemple in a faster way… here is not the need !

Thank you for that librewish. I may have to install a small partition on my SSD of EOS. Then use that tool, seeing as its available from AUR… I’ll have to do some more research though to see how user friendly it is. As I know some stuff in the AUR is typically for people who did a pure install of Arch and know how to RTFM.

Which isn’t exactly me, so I’ll definitely look into it more.

Which isn’t exactly me, so I’ll definitely look into it more.

That’s why I recommended seeking a professional data recovery service. Of course, @FLVAL is completely right that you can do this yourself, but it will require some RTFM and if you mess up, you have only yourself to blame.

If you follow the link I sent you UP it says you don’t need AUR a simple instal as below would make it :

There is no danger to make a clone image of a drive first then put the drive on the side and works ONLY on the clone image !

@joekamprad and @FLVAL Thanks for the tip about having to clone an image of the drive before doing any data recovery. So the original drive is still untouched, but to be honest I’m not 100% comfortable with trying to recover the data. So it’s something I would have to really look into before doing and I would probably only do it if I felt confident in doing that. As I’d hate to mess up my SSD and windows partition as well. As then I’d be even in more trouble. But at least I know partition recovery can be done, even if it’s a tad bit tricky.

To be fair I don’t mind reading the ____ manual. I’ve had to do a lot of reading and video watching these last few months to learn about Linux; from the various distros, to the different desktop environments and terminal commands etc. April - July has been one massive learning curve for me when it comes to Linux and I’ve been loving it. Plus, I’ve got a single boot of EOS and elementary OS on both my sisters’ laptops and they’re now loving Linux too as the laptops are much faster than when they had Windows!

However, having said all that data recovery is something I would be more hesitant to try out. Plus, it would mean having to buy another drive just to clone the original HDD to. So it might be cheaper to pay for data recovery then a new drive which would only be used for this one instance of partition recovery. Anyway the computer shop should be opening in a bit, so I’ll give them a call.

…and it needs passion to wait for hours and hours …