A calendar app for XFCE?

First of all a big thank you to the Endeavor OS team for creating this great distro.

Gnome-calendar is excluded from the available options.

I’m not using calendar on my desktop, but you can find the calendar apps officially supported by the Arch devs with command

Note that you can add more than one search word on that line.

To get even more alternatives from the AUR (which are not officially supported), use command

Sorry, I forgot to specify in my question that of course I have already started research but beyond a simple suggestion I also wanted to have a minimum of feddback on the recommended application(s).

Evolution is my favorite out of all the ones that I have already tried (Thunderbird is a close second, but it’s not as native as Evolution is for my system). It’s also a mail, contacts, tasks, etc manager, but I strictly only use it as a calendar for appointment reminders, tv show premieres, sporting and concert events, important holidays, personal events, reminders to update x,y,z, etc. It comes with multiple layouts, day, week, months view, etc. and you can color code different events easily. While it’s not a “perfect” calendar (occasionally a bug comes up), it is actively developed and maintained, so that gives me some piece of mind as well. It’s my go to for my Gnome DE. If I was on KDE, I’d use kalendar which is still very new software, but it’s a great calendar with a lot of potential. If you don’t mind using KDE type apps you can read more about it here: https://apps.kde.org/kalendar/

Other than those 3, I’d recommend Evolution as it also syncs up well with my Google calendar which is what I really like it for the most.

I’m really fond of bluemail. Using it as my default email application, after Thunderbird lost its notification feature.

Bluemail has calendar and contacts too, including a planning board feature. Very clean design and supports multiple accounts and unified inbox.

Gnome-calendar is excluded from the available options.

Is it because it doesn’t work on xfce or personal preference?

Weird I thought gnome came with evolution or was that some time earlier and now gnome developed their own calendar? I guess that happened a while ago.

I think I tried evolution for emails but that did work well for me. Calendar could be ok.

I have Gnome Calendar already installed, so I just booted it up for the first time. I’ve already got Google in part of my Gnome Online Accounts, so Gnome Calendar automatically pulled in my Google events which is nice and easy. But just switching tabs from Week to Month to Year, I can already see a bug…Granted this bug could be yaru-gtk-theme related and not Gnome Calendar related, but I’m not sure. As for the bug, have a look! Good luck reading those dates! Also, their Gitlab has over 400 opened issues still, but is a bit concerning for a single calendar application 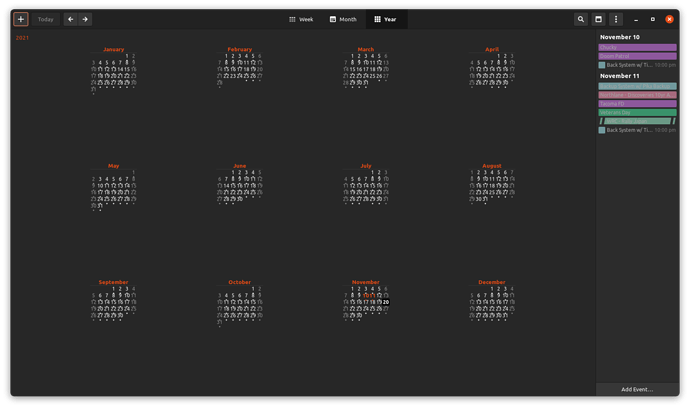 Edit: Could’ve just been a bug for the first time using the application. I used the Adwaita theme to test it too and it looked normal, so I went back to the Yaru theme and now it looks fine after a restart. Weird, still an odd bug to see. Hopefully it doesn’t happen again. But in any case here’s how it is supposed to look: 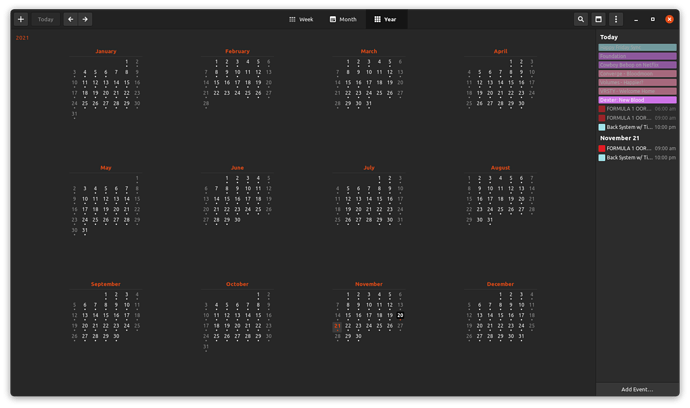 Edit2: In my experience, Gnome apps aren’t generally buggy (none are perfect though of course), but if I have to say which application is the buggiest, I’d always say Gnome Calendar. That thing needs a rewrite or something, it’s just always been a a bit of a hot mess unfortunately.

Other than the obvious nextcloud option which I highly recommend, but understand not everyone is willing to pay for. I would suggest mimetime. It’s my favorite calendar app otherwise. Korganizer is great but not so much on xfce.

I was using it on my work Cinnamon setup, and was even able to use my Microsoft exchange account on top of it.

Edit: looks like mimetime may be moving on. Check out it’s replacement if you want:

Evolution on the other hand has never crashed on me once.

Does evolution come with a panel indicator and system notification? I really like the way calendar worked for me on gnome with Gmail integration, would be great to get something similar working in xfce. The default xfce calendar is a bit bland.

It’s a Gnome developed application, so you’re not going to get any panel indicator/taskbar applet (they removed that feature many versions ago sadly), but it does have notifications support which is definitely a plus.

Ok, though perhaps because xfce is also based on gtk if I am not mistaken.

Perhaps there are additional alternatives to check out. I just want to click on the panel and see my calendar with list of meetings or similar.

In Gnome, you can see your Calendar events when you click on the Date/Time notification center, but for Xfce I don’t think it works the same, but I haven’t tested it so I really can’t comment for sure on that. Doesn’t hurt to just test it out and see.

Kalendar in aur is good, but can be buggy but is under heavy development, I run KDE so am not sure of the dependency overhead. Can’t check as I am not on my computer

Note: The widget's Google Calendar Sync is disabled v70 and below. Please update to v71.https://github.com/Zren/plasma-applet-eventcalendar/issues/177Note: The lastest version is required for...

Thank you for your answer but I want to stay as far as possible from Gnome since there is no longer an applet under XFCE and Gnome is becoming more and more difficult to live with.

Well, you’re welcome, the question arises out of necessity, and I’m a little disappointed that XFCE doesn’t have a native calendar application. Our friends here are recommending applications from Gnome or KDE. I’m definitely thinking of switching to KDE even if it seems like a drastic decision. On the other hand, it would allow me to stay as far away from Gnome as possible while waiting for XFCE or Budgie to do the same and get rid of GTK.

Thank you for your answer. But I don’t really want to install an application intended for emails, just to have the calendar function.