A really annoying thing about the AUR package yt-dlp-git is that it has pandoc as a dependency, which, in turn, has 10 million haskell dependencies (some 1 GiB of garbage). And why does it need this huge, bloated package? To convert one markdown readme file into a text file! Absolute

So if you do decide to install it from the AUR, consider installing pandoc-bin first (at least it’s just 75 MiB of garbage).

Or do what @otherbarry suggests and just download one small file…

It’s worse than when I have tacos for dinner…

May I suggest - not standing behind?? Does a creature like this have anything in common with a balloon’s reactions in case of loss of integrity?? Inquiring minds…

To convert one markdown readme file into a text file!

I mean… why does the packager even bother? Install the markdown file, it’s not like people can’t handle it…

What kind of question for soydevs is that?!
Should be more like…

Why they haven’t packed that pandoc deps inside snaps which is launched from docker image of Ubuntu inside of flatpak distributed through npm?!

Which is itself running on WSL

It seems that there have been some activities on youtube-dl side lately:

Yes, there was a recent update to youtube-dl.

Also, if you want a nice GUI that works with youtube-dl, TarTube is awesome. You can also use yt-dlp as a backend instead. You can find it in AUR. 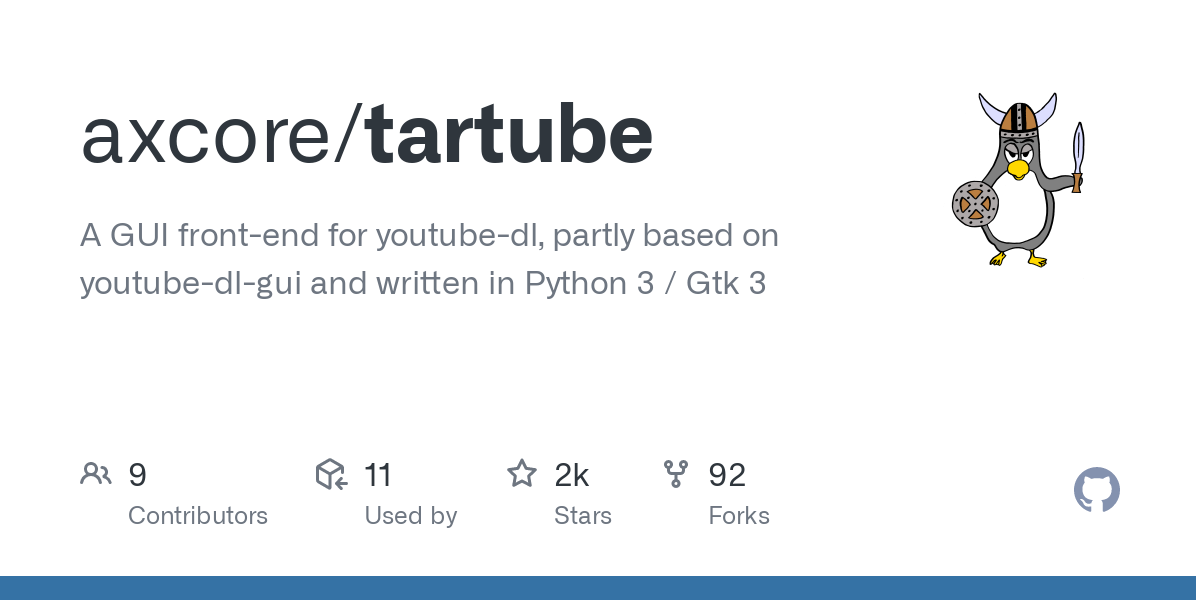 GitHub - axcore/tartube: A GUI front-end for youtube-dl, partly based on...

yt-dlp is a very nice fork of youtube-dl – it’s pretty much the only way I watch YouTube videos nowadays.

yt-dlp is a very nice fork of youtube-dl – it’s pretty much the only way I watch YouTube videos nowadays.

Tried this a few weeks back when I wanted to watch something in mkv, youtube-dl would stutter forever, whereas yt-dlp served the video without buffering even once. Haven’t looked back since.

Freetube to browse, yt-dlp to download and watch offline.

I tried that for a bit, but I prefer my Invidious instance… just seems to work better.

Freetube to browse, yt-dlp to download and watch offline.

Do you have an automated method to do this or do you paste the url every video?

I tried that for a bit, but I prefer my Invidious instance… just seems to work better.

You can set an Invidious instance as your default API in Freetube. Ironically, doing this made it perform miles better than local for me.

I just use XDM with it’s browser monitor.

Do you have an automated method to do this or do you paste the url every video?

This is how I do it:

Imagine using YouTube to watch YouTube videos in the current year! I use this script to watch videos: #!/bin/sh # ytp - a simple script that downloads and plays a video! # No buffering, no telemetry, no ads, and you get to keep the video locally # Modify these variables as needed: # Directory for downloaded videos: DIR="$HOME/Videos/temp" # Video player: PLAYER="xdg-open" #PLAYER="/usr/bin/smplayer" # Downloader and options: YTDL="/usr/bin/yt-dlp" YTDLOPTS="--no-playlist" YTDIROPTS="-P "$DIR…

I prefer my Invidious instance

As @Celty wrote, Freetube can use a group developed local api like Newpipe, or you can point to a specific invidious instance.

Do you have an automated method to do this

I don’t watch enough to warrant the effort to automate. I have a number of shorthand yt-dlp bash aliases I use and just copy and paste the url from Freetube into an adjacent terminal window.

hosting your own (private?) invidious instance would probably help with that.