I think the one you are referring to is linux-rpi.

linux-rpi is the fork of linux by raspberry pi foundation, possibly based on linux-lts. It is currently 5.15. It is packaged by archlinuxarm.

So EOS picks the linux-rpi kernel for the Raspberry Pi 4 installation. What not use the Linus-eos-arm?

Does that one not work or did the Raspberry Pi Foundation include things in their kernel that have not been included in the upstream kernel?

Does that one not work or did the Raspberry Pi Foundation include things in their kernel that have not been included in the upstream kernel?

Well the answer is don’t do it.

I’m reinstall from the EOS ISO and forget about why we’re at 5.15

It’s odd which paths different Distros take. I just tested Ubuntu 22.10 ARM and it uses Kernel 5.19. I noticed that the Video accelleration is at the same level as what I see out of EOS ARM and much better than RPI OS 64 bit.

Well the answer is don’t do it.

If you are able to find the source (i.e. the linux fork) of the package they are building, I can try building it for testing.

5.15 .87-1 what eos use is stable as rock (IMO best one be on ) choice your that wonderful thing about linux 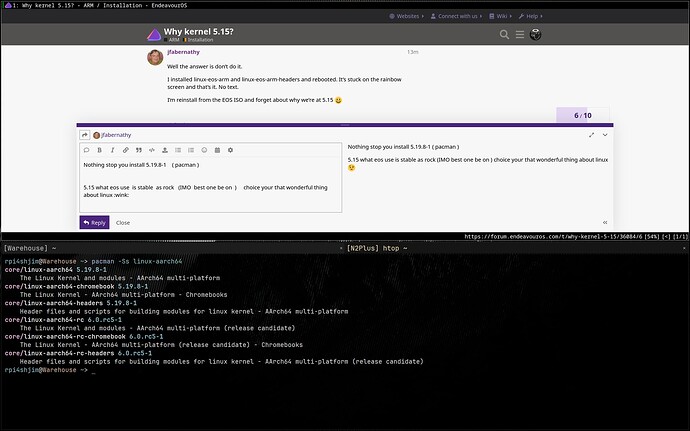 EDit or if no try this

You need one of Jeff “It’s been 0 days since I recompiled the Linux kernel” shirts.

I used to do it many times a week. Now I do it every fortnight.

I was able to get EOS ARM running with 6.1.5 kernel but only on a microSD card on my RPI4. I used the miniarch method here Miniarch

Look at issue #1 which is closed and the solution is at the bottom. Once you got thru the first 4 steps to update the system, step 5 lets you run the EOS ARM installer.

It’s an interesting experiment, but too easy to just run the standard EOS ARM. Can’t really see the advantages of the 6.1.5 kernel yet for the RPI4.

It seems to be a way to get EOS with 6.1.5 kernel on other ARM SBCs not yet supported by main stream EOS ARM.