What application have you recently discovered?

I’d like to start a new topic here, most of us know that Linux world is so sooo much about endless exploring of foss.

So I’d like to ask you today what application/command you’ve recently discovered that may be a game changing for you? I mean those apps that make you feel like “woooow, I didn’t know that!”. I heard once that it took someone 4 years to discover that you can do reverse-i-search with ctrl + r in terminal.

I don’t want you to paste anything that you just saw anywhere and heard that it’s good, I’d like to see here things that you saw, tested for a bit, and literally know that you can’t live without anymore.

For me most recent is:
termite
a terminal emulator, thanks to @anon77235960 I discovered that there is more modern version of urxvt which solved few of my problems with urxvt - like breaking the lines and text after resizing, not working well with screen command and most of all - really easy customization with config file.

not recently - but that was my reaction when I discovered tmux and rtv (reddit terminal viewer)
I srill think ncmpcpp is the best music player frontend ever made for mpd.

I’m not going to make an endless list of nice terminal apps here but here are sooo many. Why fire up some heavy bloated programs when you got these snappy little quties

Since my wife uses my laptop at times I have to make my desktop usable for her (no keybinds for that girl). She likes a traditional, category based menu that she can scroll through. I prefer to hit Win+a and start typing if an app doesn’t have its own keybind. When I found out about jgmenu it was the best of both worlds. And it automatically updates. Now my wife can click a button on the bar at the bottom of the screen and scroll through sub-menus, or I can type what I want. Yay!

Well, good that somebody started this thread, it’s more than welcomed and useful.
I’ll start:
Timeshift and Dejadup - the back-up, the back-up mantra was never easier to put in action with those programs. First time installed in my Linux machines.
Pinta for simple photo editing and very easy to edit some, this software made my day when I have discovered it.
Redshift - hate when working late and blue light from the screen is giving me eyesoreness and then difficulty to go to sleep. Discovered this little gem, can’t live without it anymore.
This is for now - will keep adding to this thread.

translate-shell - If you don’t want to visit traslate.google.com too often

edit:
Will check out “scrcpy” myself - so thanks for mentioning it

Yes, I know it is a GUI and therefore is not “pure” - but it is listed on the Arch wiki and is available in the AUR.

If you want to have it, you install it by opening the Terminal and typing yay -S pace and that will do it. Once installed, it shows up in Applications->System.

I think that it might be a very useful and helpful program to have.

Thank you for reading this. 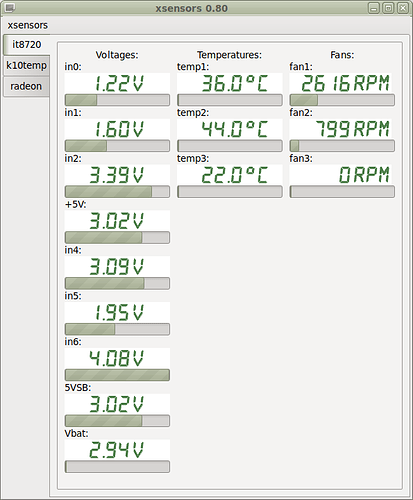 Heard of it before, first used today and instant-love:

So simple, so nice, stable, survives network disonnections… I had to share it!

DESCRIPTION
The detox utility renames files to make them easier to work with. It
removes spaces and other such annoyances.

I found this after I started using mplayer for playing media files. I would navigate to a directory or folder that had spaces in the title, and I couldn’t get any further than the first word of the directory/folder/file. 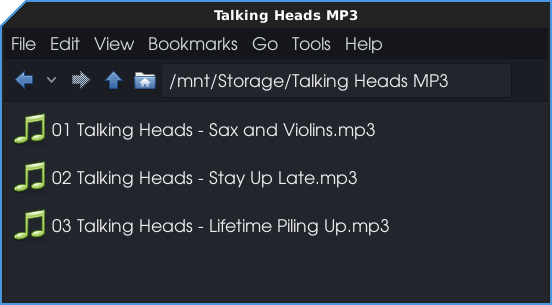 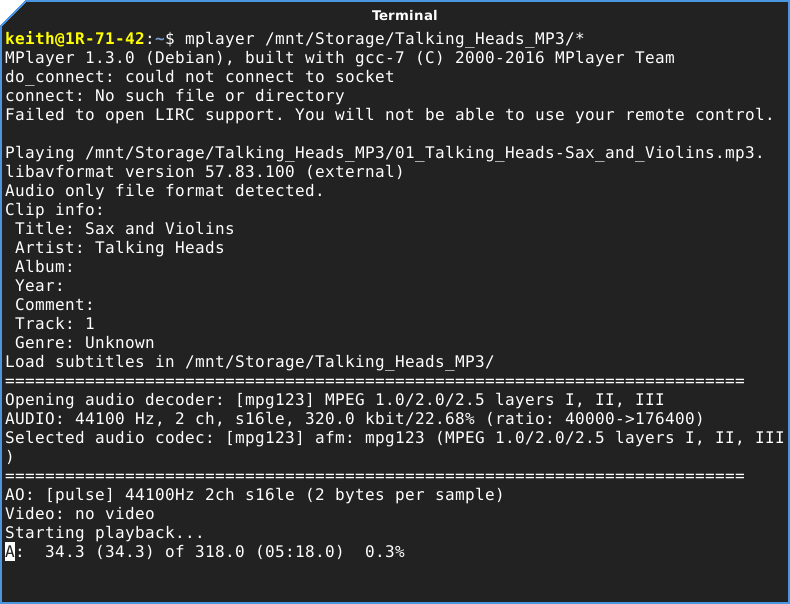 You can combine them so fzf is available in ranger via vim-similar commands.
That’s new ground for me but i will stay with it as it works really fast.

Annotate screenshots on Linux with Ksnip

Ksnip comes with quite a few configuration options, including:

You can also integrate it with your Imgur account.

You can annotate with:

You can also blur areas to remove sensitive information.

I usually use scrot for quick screenshots but sometimes you need to add a message or blur a feature which scrot does not handle. Gimp was my go to for those features. However Ksnip is much smaller and quicker /easier to use in a hurry for those tasks, 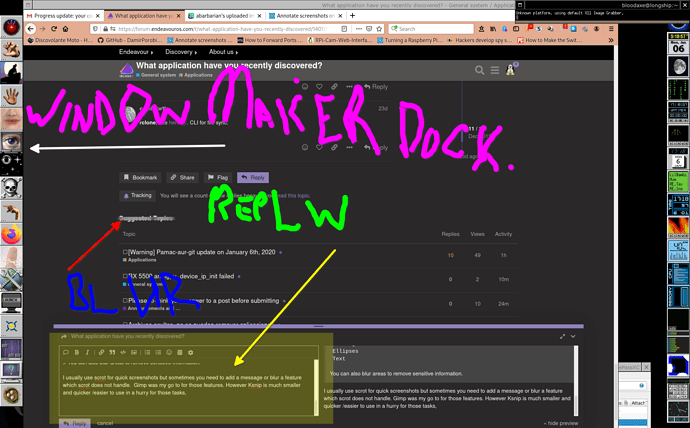 Ooooops ~I spelt REPLY wrong in the screenshot

Came upon a flatpak app, “Firmware”

GNOME Firmware Updater will be integrated in GNOME desktop

Previously I did firmware updates using Windows. (working on a Dell i5675)

Very interesting, I had read something on the Fedora forum.

Very good contribution and thank you very much! 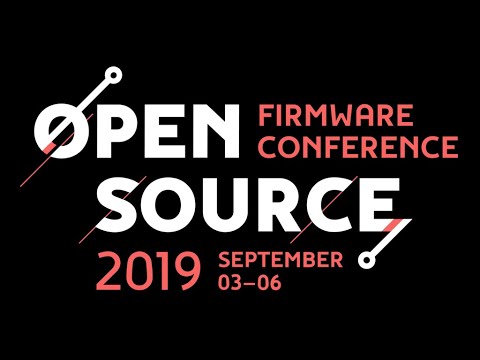 A Linux Capture Screenshot called Flameshot could be helpfull for wiki pictures.
Lot of different tools to annotate before to save. The highlighted text is great !
Right click to choose differents colors, settings available to name pictures etc… : 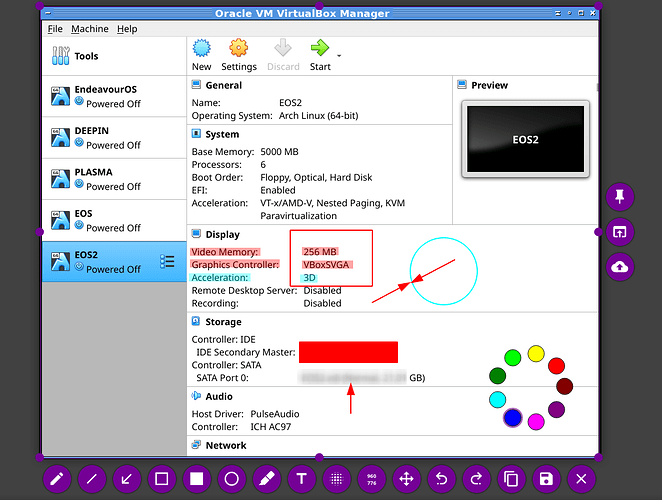 @FLVAL Thanks for sharing. That’s a pretty nice tool. I don’t need to screenshot often, but when I do, that will be very helpful!

Scan your Linux security with Lynis

Have you ever thought about how secure your Linux machine really is? There are numerous Linux distros, each with its own default settings, on which you run dozens of software packages with different version numbers, and numerous services running in the background, which we hardly know or care about.
To find the security posture—the overall security status of the software, network, and services running on your Linux machine—you could run a few commands and get bits and pieces of relevant information, but the amount of data you need to parse is huge.

It would be so much better if you could just run a tool that generates a report on a machine’s security posture. And luckily there is one: Lynis. It is an extremely popular open source security auditing tool that helps with hardening Linux- and Unix-based systems.

Great tool well worth a try.

As of two days ago I’m now, using Brave as default browser.
Don’t have anything more exciting to tell, no good tips for hidden gems on the repos…

So I’d like to ask you today what application/command you’ve recently discovered that may be a game changing for you? I mean those apps that make you feel like “woooow, I didn’t know that!”.

Among other computers, I have an Asus 15.6" Laptop Model ROG Strix GL553VE-DS74 which was originally a Windows gaming computer which I converted to EndeavourOS (after having several other GNU/Linux distributions installed on it).

This computer has a backlit keyboard; its color was red, which was not too bad, but I knew that the colors could be changed - I just didn’t know how to do it.

I went into the pacman-aur-git program and did a search for asus rog keyboard and, lo and behold, I found the rogauracore program.

I installed it. It is used via the command line.

Now I can change the backlit color(s) of the keyboard to whatever I want. The program is quite versatile and amazing.

Is this a “game-changer?” Certainly not. But it is a “fun” program and is quite easy to use. If you happen to have an Asus ROG computer which you have converted to EndeavourOS, I would recommend this program.

I would also guess that there are similar programs for other brands/sub-brands of computers also. Just check for them.

I hope that this has been of some interest.