So, for those not in the Mechanical keyboard bubble, there are three types of switches.

Tactile clicky but no sound

I’ve always been a tactile fan for many years. That may have changed as of today.

I have this Outemu Red Nuberpad on my desk. It’s really cheap, and the switches are quite scratchy.

Today, I decided to Lube them with some Silicon spray lube.

Took the keyboard apart, and used some 3M spray to lube each switch. Then let them dry for 3 hours.

Put it back together for a type test and…

Hear it for yourself.
96kbps FLAC files from my LG V50

Switches are noticeably smoother and just REALLY good to type on.

And noe I’m getting Gateron Yellow switches for my next keyboard. Lol.

Have a nice day yall. Just wanted to share my transition.
Haha

Another audio for you homies.

As I may have mentioned elsewhere what I really like is heavy tactile feedback, with really light weight… and IO haven’t found a mech setup yet that duplicates my Amiga A1000 keyboard (fastest ever). As for the sound - unless it sounds different when mistyped (!) I don’t worry about the amount - and the cat hasn’t complained yet (on MX blues)

i like the default sound of outemu switches, theyre loud and the scratchy noise im a huge fan of personally.

My MP keyboard with outemu browns has been my favorite MK ive had so far, ive had plain cherry brand kb with browns and Azio retro with i think was Kailh Blue switches on the one i had.

theyre loud and the scratchy noise im a huge fan of personally.

OMG WHAT IS WRONG WITH YOU (jk)

If you like brown switches you should try the Kailh Silent Box Browns. The tactility profile is a fresh of air. Really enjoyable and quiet.

I have never had a mechanical keyboard before and i didn’t want to spend $300 on one with tax such as the Cooler master CK350 which has red switches. So i opted for the cheaper combo pack Master Set MS121 to try and i really like it. They are the mem-chanical red cap clicky switches & RGB Lighting. I’m sure it’s also louder than some but i have no issue with it.

Not bad for a top of the line keyboard.

They are the mem-chanical red cap clicky switches

You should check out Zealios v2s as well.
They are expensive as hell, a dollar per switch, but they really have incredible tactility. It’s the type you get from a light switch.

As I own a HHKB Pro2 you can guess what I like.
Once you go Topre there is no way back…

I like heavy keys with heavy tactile feedback. I can tolerate clicky in order to have it. I owned 1 red switch keyboard in my life. I used it for 2 days and deposited into the garbage can as the switches were so insanely light I couldn’t type on it.
I’ve only used a couple Topre keyboards, and I couldn’t stand the things. FAR, FAR, FAR too light for my tastes. Ideally I want my keyboard to feel like a classic, mechanical typewriter. I like HEAVY switches. Currently I use all blues since everything else I’ve tried was too lightweight, although to be fair I’d like far heavier than this.

I would love to, but the problem is finding a keyboard that doesn’t cost an arm and a leg in the US. I won’t pay more than $80 for a 100% mechanical keyboard (I don’t care about the gaming features, or RGB, and Red Dragon makes really good ones for $40-$60 so not paying double that), or $40 for anything that’s 10-keyless (since it’s lacking a feature I use a lot, so I won’t pay ANYWHERE near as much for one). I have heard about the Ink Blacks before, and have found not a SINGLE keyboard available for purchase in the US that uses these switches for under $120.
I’ve never heard of the Zealios v2…I’ll have to look for them.

Add your switches and you good.

60%? Ewwwww, no way am I touching something like that. The 75%/80% is the smallest I’ll go. Anything smaller than that and it’s unusable to me. I use F-key far too much, keypad far too much to be wasting my money on those types of keyboards. That and having to purchase the switches I wanted would make it like $100+, not a chance I’m spending that kind of money on a keyboard that doesn’t have a full Fn row and keypad. The companies that make these seem to not realize there’s people that set at desks that can have a full keyboard, and thus WANT a full keyboard.

You can map those keys to where you want with QMK. Fn key + Num row for function keys. Fn and right hand fingers for num pad etc.

The idea is to move the keys to your fingers, not the other way around

This video explains it well.

Its more of FN+ Num key…

If that is the case, you should check out Keychron and Epomaker. They make 75% 95% and full sized mechs for under 100USD.

You can pull out the stock keys(most are hotswap) and sell them for your preferred switches.

Thanks, I’ll just stick to blues until I can find someone who actually makes it with the switches I want to try. Re-switching a keyboard is more labor than I want. And reselling the old switches would take FOREVER since if you use ebay you’ll lose so much on the ebay fees + paypal fees, and I can’t use offerup since ti’s phone only for selling (I don’t install apps on my phone).

They sell Gateron Blue brown Reds, or their own optical switches BTW. IMO Much better than Cherry.

I’m completely the opposite. I like HUGE, HEAVY, MASSIVE keyboards. I want my keyboard to function as a deadly melee weapon, in case I am attacked by a home invader (and I want it to be stronger and more durable than my opponent’s head). 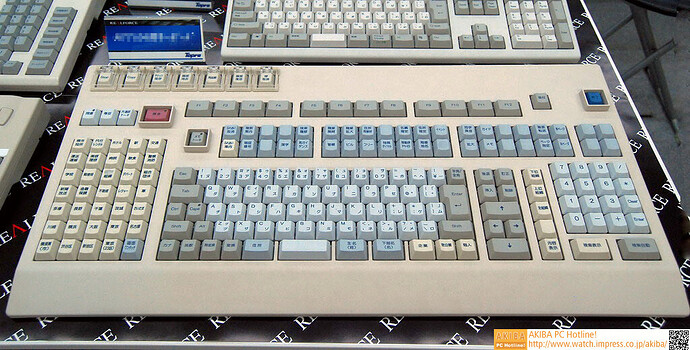