I’m having this very strange issue, where a small green dot shows up in the tab bar of Firefox. Opening a new tab makes it go away, and closing Firefox also makes it go away. I tried taking a screenshot, but it didn’t show up. It only being visible when Firefox is open makes me think it isn’t a dead or stuck pixel. I’ve had the same issue on Firefox and Wayland, and through two fresh installs. Also, just got my laptop about a week ago.

If you are referring to a dot like in my screenshot, the explanation is simple. The dot shows up every time, when more than one instance of an app is running. In this case I reproduced it with a normal Firefox session and an additional instance with a private/incognito tab.

Opening two instances of dolphin for example will also add that green dot.

If that would be it, it would show up in a screenshot as well. But that is not the case.
So the best bet is a hardware issue with the monitor.

And plase provide a photo of it

Nah, not that dot. It’s the size of a pixel and is in the tab bar, not the task manager.

It only being visible when Firefox is open makes me think it isn’t a dead or stuck pixel.

Also, just got my laptop about a week ago.

It does sound like your new computer has a stuck green subpixel.

Do you see the green dot when you view this graphic?

Click the image. Press F11 to make it full screen. If necessary, press Ctrl++ to enlarge the image.

Do you see the green dot when you view this graphic?

No, I don’t. That’s why I’m thinking that it isn’t dead/stuck. 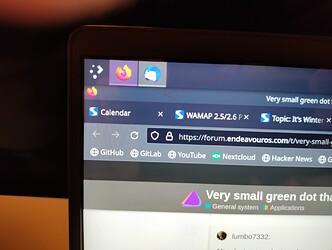 Now when I open a new tab, it’s gone. 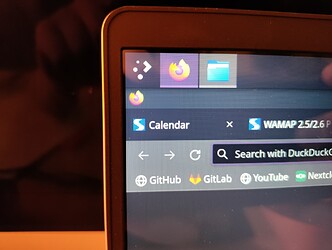 It also isn’t there in Dolphin, or any other application, just Firefox. Not even Thunderbird. 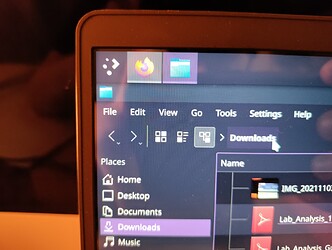 What happens if you resize the Firefox window and move it around? Is the green dot moving as well?

It stays in the same spot, but if I move the Firefox window a bit over to the right, it disappears. Moving it back over to the left makes it appear again.

I tried taking a screenshot, but it didn’t show up.

This observation suggests a hardware issue.

That would make sense if it didn’t only appear in Firefox, and if it didn’t disappear and reappear when I move the Firefox window.

Have you checked with a different theme? Do you see the dot with a light colored theme for example?

If I have a theme with white titlebars (e.g. Breeze Light), I can’t see it. Funnily enough, normal Breeze (with grey titlebars) was making it show up in system settings, but Dracula doesn’t. This is just bizarre.