When you update your system on

updates your system.
You only use

when you update your mirrors.
the y in Syu is for refreshing the database

OK, clear. Thanks for your help, incl. the link.

You’re welcome. Command line takes some time getting used to but is very powerful once you get a hang of it. I don’t do any GUI package management anymore

TBH, one of the reasons I have recently been so frenetic in my search for an Arch-based distro that I could handle was the command line package management system - I find it easier, more attractive to use than e.g. Ubuntu’s “apt” tool.

Another major reason is the impressive array of packages in the official and other repositories - AFAICT, it is unequaled among the distros.

Package management is very easy in Arch. They have a good system.
So even someone like me who is not a developer can modify PKGBUILD scripts from other people and maintain packages. Here are the packages I maintain. 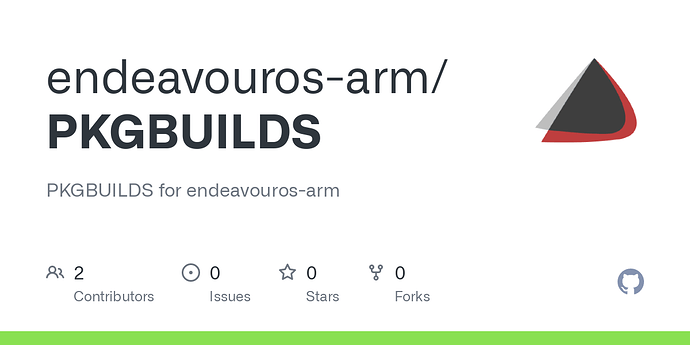 For first time I knew that you are also a maintainer. Earlier I thought you are member of creative team for ARM, and you develop many things for it.
Because of golden ARM badge, it felt like you are the creator of EndeavourOS for ARM.

Sorry for my poor knowledge.

What made you think I did creative stuff?

That golden badge of ARM team.

Because of golden ARM badge, it felt like you are the creator of EndeavourOS for ARM.

This honor goes to @Pudge, he started EndeavourOS ARM 2 years ago and is the lead developer.
He has the same badge

Also I noticed that, on Github, there were some pull requests for EndeavourOS ARM from your side, hence “creative team” might be…

I did some basic stuff in inkscape. That’s the only creative work I did.

I remember, during lockdown, I was also learning Inkscape and Krita with my friend who is expert on these. He taught me many things over phone call. But my system was not able to process the works due to its old hardware

. Hence, with time I also forgot the things I learnt. Afterwards we didn’t got time as our online schedule was announced.
In future, if I will have a new system for my personal use, then I will also begin to contribute something from my side to EndeavourOS.

At that time, I was on Windows, due to which just after boot, RAM usage was used to be around 1 GB out of 2.7 GB. Hence, using the graphics based apps there was enough to throttle out the CPU. Also, my PC was purchased on 2010-2011, hence this is graphically weaker machine as well.

Also, due to my experimentation with system files on Windows, I ended up in removing the boot files and boot loader from the system

!! And then when I restarted the device, the error was displaying " Operating System not found, press Ctrl+Alt+Del to restart". I tried to fix the issue, but it didn’t worked out good enough.

This was the main reason for my switch from Windows to Linux. And I am happy that my understanding of the system is much better in comparison with Windows.

Many people think managing things with GUI is simple in comparison with terminal approach. But my experience with “User-Friendly Approach” on Windows had made a flip belief. Despite the presence of various GUIs on WIndows, I was not able to know what I was exactly doing there.

when you update your mirrors.
the y in Syu is for refreshing the database

Just to be clear, if you should use -Syy when you update your mirrors is somewhat questionable. Even when you switch mirrors -Sy should still be sufficient in a normal situation.

The case where it is needed is when you switch to a mirror that is older than your current mirror and the new mirrors databases are older than the last time you updated. In this case, it depends what you want. If you just want to use the new mirror even though it is out of date, then using -Syy is the right action.

For me, I would much rather get errors in that situation so I know the mirror is out-of-date. In most normal cases that would mean you have switched to a broken mirror.

There are, of course, exceptions such as if you are deliberately connecting to a time delayed mirror or an archive but that is not something most people would do in the normal course of using their system.

Thanks for the info, it is very well explained.

But what about when I’m scripting it? If I’m switching mirrors in a script and I don’t want it to fail, should I still use -Syy?

Thanks for those additional details.

For me, -Syu will be enough as I have no interest in messing with mirrors., in any case not at this stage. Perhaps when I will be more experienced I’ll need or want to find out more.

Many thaks for your help.

If I’m switching mirrors in a script and I don’t want it to fail, should I still use -Syy?

Maybe? It depends on the nature of the script and what the implications of switching to an out-of-date mirror would be.

Look at this way, if that happened during an install, that would mean you switched to a mirror older than the ISO itself. If that happened, would you want the install to proceed in that case?

For me, -Syu will be enough as I have no interest in messing with mirrors.,

You should know how to regenerate your mirrorlist in case something happens.

But normally, when you update, you should just use yay, that’s the least typing. Just to be nitpicky, it’s not really an alias for yay -Syu it’s just that -Syu are the default arguments for yay when none are provided explicitly.