Use left alt as backspace

My finger hurts too much when I press backspace button on my keyboard. (its too far) And as a broke student, I don’t have the cash to build myself a custom keyboard or something.

So I want to use left Alt button as backspace. Using xev I could find that keycode for left alt button is 64 and keycode for backspace button is 22. But I have no idea what to do after that

In case its required, I use Dvorak Programmer layout. I activate it using setxkbmap dvp in my i3wm config file. (not the most elegant way). I also have escape swapped with caps lock using setxkbmap -option caps:swapescape, in i3wm config.

Edit : I am using i3wm. No desktop environment.

Are you using KDE? You can easily set the capslock as an additional backspace button in your keyboard settings. 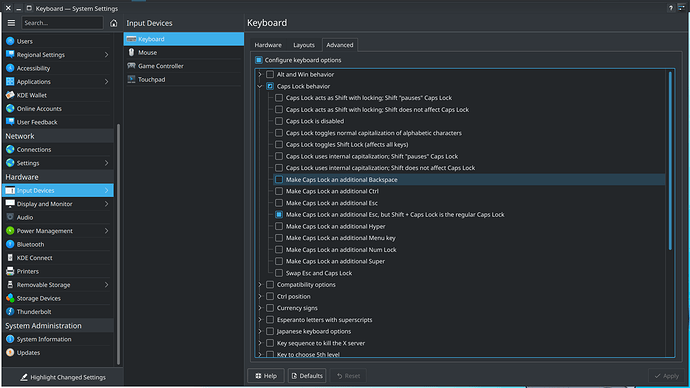 Thanks. But I am using i3wm. Sorry for not mentioning in my post.

i3. . . got it. I’m looking through the i3 documentation. It’ll be some sort of bindsym mod4 (left alt I believe) backspace

can i3 do that?
Bindsym is for defining keyboard shortcuts. For remapping keys, I suppose Xmodmap or something should be used, but I failed to understand its syntax.

I would ASSUME so. . . but I can’t say I’ve ever done that before. I’m looking through documentation now.

Well then I’ll go and look for it. Use your time for something else.

I was looking at 4.3 keybindings section

I would just try backspace. There’s GOTTA be a way to script it. Like bindsym keysym and then revert to the backspace key somehow?

I found new solution and problem.

I run this in terminal

Now Alt works as backspace but only in terminal and deletes the whole word instead of character. Does not work in firefox.

In your i3 config you will probably have to release the alt as a modifier from i3 somehow since it should be a default modifier binding.

I use super as modifier. So i3 is not conflicting.

Use xcape, this will backspace on tap, but held it will still be Alt:

Not tested, but should be OK, run from a terminal to test first.