EndeavourOS Linux x86_64
Kernel: 5.14.14-arch1-1
DE: Plasma 5.23.1
Right so my question is how can i have access to that type of terminal when you search for “UpdateInTerminal”
Screenshot of what i mean 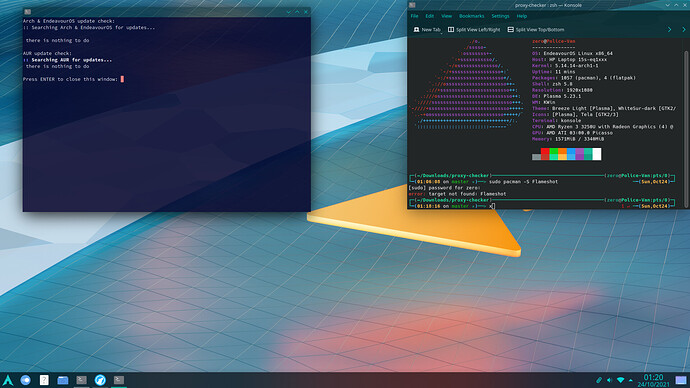 The flameshot package doesn’t have a capital F.

If you post text output as text it’s easier to see what you’re referring to.

Edit: wait, that’s not what you’re asking about…

But your question is not really clear to me …

so looks like you have xfce4 terminal installed?
pacman -Qs xfce4-term
and it uses EndeavourOS color theme…

I had a somewhat similar issue prop up for me when I first installed EndeavourOS, but this was on Gnome. By default Gnome Terminal is the default, so all EOS tools would use that when doing any terminal stuff. However, I use Tilix terminal. So while I always used Tilix, the various EOS tools I have installed, would always open Gnome Terminal first, since it’s the DE’s default terminal. Luckily the solution was simple, simply uninstall Gnome Terminal and the system would then recognize that the only terminal I have on my system is Tilix, so any time from then on when I used the EOS tools, it would open up in Tilix and I was therefore one happy user!

You just need to determine how many terminals you have installed on your system and if you need/want all of them, and possibly if need be, uninstall any terminals applications you don’t need and then you should be good to go, so long as I understood the question correctly of course

The following terminals are known to work:

sidenote: @manuel is this shown as a doc in app info tool? i can not find that…

is this shown as a doc in app info tool? i can not find that…

Terminals and their configuration is documented here:

By: @manuelCreated: 2019-JulUpdates of this document: go to the end of this doc. The EndeavourOS Welcome app is one of the first apps to encounter, both while installing EndeavourOS, and when start… 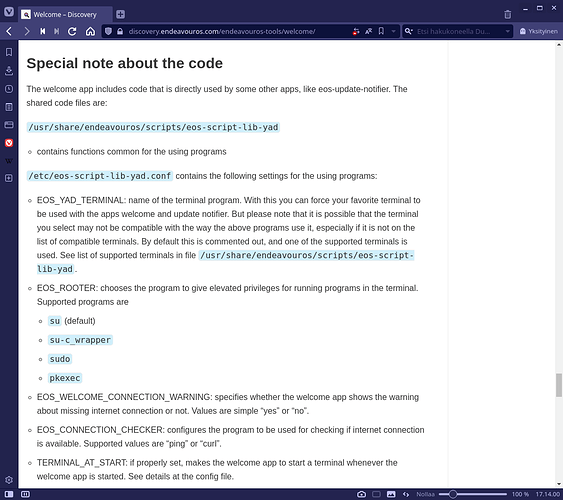 EDIT: added a link to Welcome doc in UpdateInTerminal doc on
eos-apps-info version 1.1-5.