hi, i’ve been using EOS for the last 4 months and never had a problem, now i can’t update because of hwids. 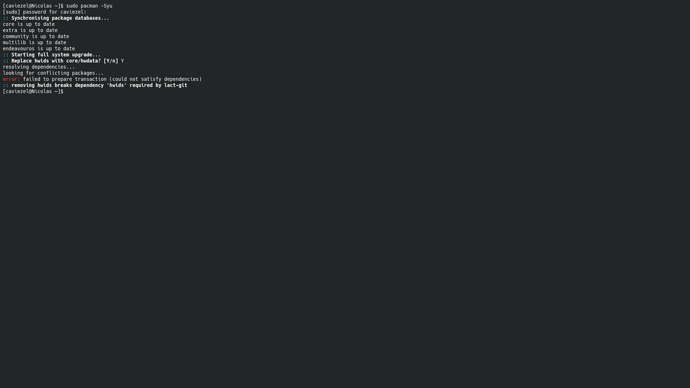 so, i tried to not replace it, however 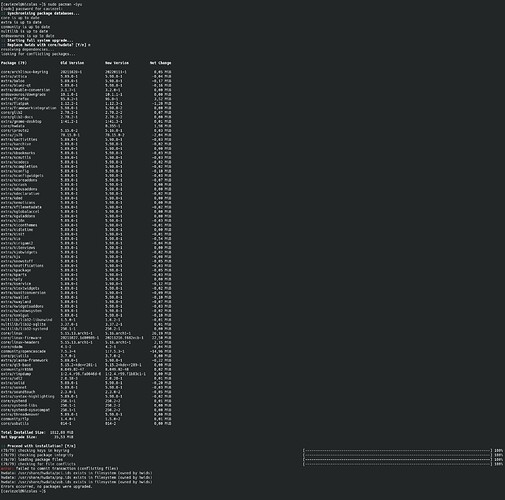 lact-git now has hwdata listed as a dependency instead of hwids, so try updating lact-git first: 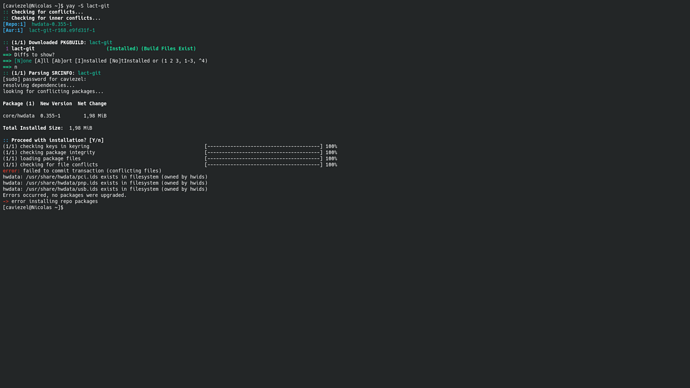 I can’t install or update a package because I get (something like) this: error: could not prepare transaction error: failed to commit transaction (conflicting files) libname: /insert/file/name/here exists in filesystem Errors occurred, no packages were upgraded. Why is this happening? The package manager, pacman , has detected an unexpected file already exists on disk. By design it will not overwrite files that already exist. This is a design feature, not a flaw - package managers are desi…

Please use the </> option when posting. It’s really hard to read a screen shot and it’s even tougher for someone to help you or for someone else who may have the same use to search for it once this is answered.

It’s owned by hwids. . . I just looked at both repos and aur and I don’t see that package at either location. …

Can you provide pacman -Qi hwids

Welcome to the forum @CAVIEZEL

This is probably what you need to do. Your AUR package is built against the old package.

It’s owned by hwids. . . I just looked at both repos and aur and I don’t see that package at either location. …

That is because it was replaced by hwdata, it no longer exists.

@Stagger_Lee mentioned that a few posts ago already. I don’t know if it was replaced and removed, or just replaced in whatever package it was a dependency in. I just wanted to make sure removing it wouldn’t break some other random thing they installed along the way also.

I don’t know if it was replaced and removed, or just replaced in whatever package it was a dependency in.

Replacing a dependency won’t cause that message. That only happens when package A is a replacement for package B.

When that happens, repo packages will get their dependencies changed at the same time and get rebuilt if needed. AUR packages end up in catch-22 though. You can’t update them because you don’t yet have the new package. You can’t switch to the new package because the dependency from the AUR package stops you.

The only ways I know of to fix that problem are to temporarily remove the AUR package or tell pacman to ignore the dependencies.

While I don’t disagree with anything you said, I didn’t want to advise them to remove the package to install the next to find out some obscure AUR package they do need requires it and hasn’t updated their dependencies. . . That’s all.

The only ways I know of to fix that problem are to temporarily remove the AUR package or tell pacman to ignore the dependencies.

I think there still is the default way:

When yay/paru/trizen asks if you want to edit PKGBUILD, answer yes and edit it to change the dependency package name.

I think there still is the default way:

I wouldn’t recommend that method for a few reasons

you need to do that first and it will try to pull in the new package as a dependency. However, if the old package has any repo packages dependent on it, it will still fail.

I suppose it’s a try and see situation.
Or just uninstall…

i don’t know if it’s a permanent fix

The issue was caused by a one-time package replacement so it should be a permanent fix.

That being said, this will happen from time to time, especially if you use a lot AUR packages.