If I wanted to uninstall EOS, what would I have to do? My disk is partitioned like this: 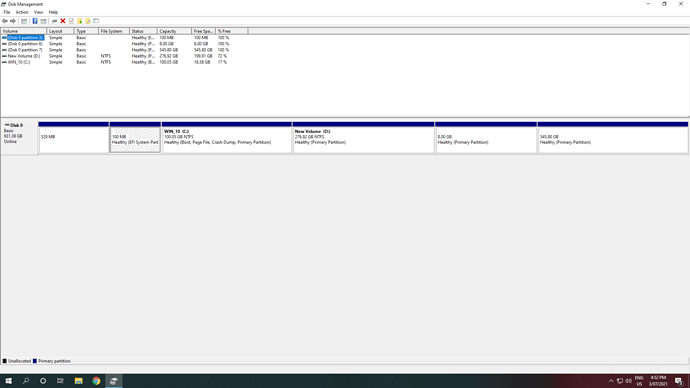 Can I follow this guide (I use GPT and UEFI by the way)?

I wouldn’t follow the guide - from what I saw it is a bit(!) outdated, and doesn’t seem to cover UEFI. For starters, the Windows boot loader should still be sitting there untouched.

IF you know which partitions are in use by Linux, the easiest way I know of is to boot to the USB live session that you used to install Linux in the first place, then run GParted to delete the partitions that contain Linux (EnOS, apparently, in this case). Do NOT delete the UEFI partition! After a reboot into Windows, you can use its partitions tools to resize or repurpose as you choose.

Even easier way if you want to remain only with windows is to do it from Windows itself. Using the partition manager preinstalled you will see the Linux partition because it will be indicated with an unknown file system. Just delete it from there and grow up the windows partition to recover the space.
Then from the bios you can also remove the grub entry in the bootloader.

May I ask why you want to uninstall EndeavourOS?

All you really need to do is delete the partitions and in your BIOS set the default back to Windows Boot Manager.

That being said, if you aren’t sure which partitions are which, you might want to do that from a Linux ISO. gparted, kde partition manager or any of the cli utilities will do a better job of telling you what is in each partition.

I’m not going to do it immediately (if at all) but Dota 2 is acting up (takes up to 4 minutes to quit) and I figured if I’m going to reinstall dota 2 I might as well start from scratch. Plus with Arch you’re forced to update every package whereas with something like Gentoo you can just mask a package (which stops it from updating). But as I said I’m not uninstalling any time soon.

If you read up on out wiki, you can see how to downgrade a single package (or more, if needed - or to a date) - then set particular packages to be Ignored (not updated). Pacman is pretty capable!

Also if you want to start from scratch you can just start installing EnOS or whatever (Gentoo, arch, Ubuntu, what fits you best) and install it in the EnOS partition formatting it first. No need to “uninstall” (which also is not really an OS thing) (really sorry being pedantic I know)

I was aware of the downgrade option but didn’t know you could force a package to be not updated! Thanks for that.

Also if you want to start from scratch you can just start installing EnOS or whatever (Gentoo, arch, Ubuntu, what fits you best) and install it in the EnOS partition formatting it first.

Yeah my plans were to just wipe the partition.

Plus with Arch you’re forced to update every package whereas with something like Gentoo you can just mask a package (which stops it from updating).

If you want to be able to selectively upgrade/install packages I am not sure that gentoo is really your best choice. I would instead using a non-rolling distro based on fedora, redhat, debian, ubuntu, opensuse leap or one of the non-rolling mandrake descendants. Since most non-arch-based distros are based on one of those that still leaves you with a lot of options.

If you want to be able to selectively upgrade/install packages I am not sure that gentoo is really your best choice.

Why though? I heard gentoo has options with which you can specify which packages are to be ‘stable’ and which packages are ‘rolling’. I want a system as rolling as arch but don’t want stuff like mesa updating that frequently. Although as I’ve only used EOS I don’t know about the update process on non-rolling distros.

Have you ever used gentoo? If not, I would urge you to try installing it in a VM.

I want a system as rolling as arch but don’t want stuff like mesa updating that frequently.

Everything has a cost, there is no perfect solution. Configuring and using gentoo to work like you want or using a non-standard distro like nixos that is capable of mixing and matching versions both introduce new compromises/challenges.

If you are thinking that gentoo will give you all the things you love about arch with the extra features you want, that isn’t really how it works. More accurately, gentoo is different than arch and there are pros and cons between the two.

That is why I would encourage you to try it out in a VM and ensure you are comfortable with managing your system the gentoo way before you commit to that change.

I actually have tried out Gentoo in a VM, multiple times actually. I don’t mind it actually. In fact I’ll be willing to sacrifice some things; my state is basically like Bilbo in the Fellowship of the Ring: EOS fulfills my needs but I want to use something different for a while. But I’ll probably move when I can get my hands on more RAM and storage. Thanks for he heads-up though.

It’s been aeons since I read that, but, er, wasn’t that Frodo?

No. Bilbo wanted to go to Rivendell. Although at the end (spoilers) Frodo also didn’t want to stay in the Shire anymore (Bilbo and he went to the Grey Havens with the Elves).

Oh I thought that was The Hobbit. Ah well, like I said, it’s been a while