Unable to detect my connectivity

Yes, you were right. As far as I know Calamares installers will show a warning that there is no internet connection regardless if it’s a net installer or offline installer. Which again makes me more curious and want to resolve it.

Hi @Dar, yep the error from netinstall found on your log file is here:

Could you create your usb stick with the terminal directly ?

Write the Live Install image to your USB in replacing the X by your usb drive and your path to your ISO file:

Then start on it and refresh your mirrors and give me the result of:

Actually I used my Android phone to flash the iso into the usb drive via OTG cable. While the other times i booted the installer from an external harddisk via Ventoy. Gimme a few moments I’ll revert to you with what you needed.

Actually I used my Android phone to flash the iso into the usb drive via OTG cable.

If you happen to have a rooted device, this app (DriveDroid) may interest you …

I used to use that app back when “rooting” was still the trend. Nowadays it doesn’t make much of a difference, unless you’re using a 5+ years old mobile.

Now I use this Etchdroid as it could workaround without root and also it’s free.

Edit: Well, I assumed that you wanted to say it was due to Ventoy’s having issue

I went trough almost the same.

I used the iso from endeavouros-2020.09.20-x86_64.iso.torrent
with Ventoy and then later a new install again, as you did, with the iso written to the usb-drive. Issues was the same either way.

I thought thaat maybe Ventoy was the problem after reading this:

Ok after talking to @jonathon via Telegram I decided to try downloading a fresh ISO and use Etcher to create my key instead of adding the ISO to Ventoy. This time when selecting Online install I actually got the Setup GUI. From there the install went perfectly.

My install issues was:
I wanted to test EndeavourOS and I have a Samsung T5 SSD External drive, that I want to use for the installation and to be fully bootable from that drive alone.
I now wanted to install and even if I had WiFi connected and was able to surf the net, the installer kept saying, that there was no network.
I choose the manual partitioning and after going through setting up with /boot / and /home there was a warning about gtp and making a 8 MB partition. So went back and did that.
Shouldn’t that warning come before the manual partitioning was done?

I tried several times, but the manual partitioning kept chrashing shortly after hitting next.
Only thing that worked was to use the whole disk.

Now I didn’t want XFCE, but KDE Plasma, so I did install again.
This time I setup the partitions with gparted beforehand and connected with ethernet.
It still kept saying that, when I choose online, that there was no network.
I choose “Continue anyway”, used the partitions that I made and this time the installer, at this point, gave me the online installing option to install KDE Plasma.
Rebooted and all was working as expected

I should have saved the logs, but didn’t

Well, it sounds like magic if the installer told you no network but managed to find a plasma desktop to install for you, I won’t be ashamed to tell you I tried clicking “continue anyway” too, unfortunately I get xcfe instead of the lxqt I wanted.

Anyway, linux GUI installers all sucks so bad. Even in 21st century. Command line is still the best, @FLVAL would you consider to make a CLI installer for advanced user at least?

You only needed ip link? Here it is.

having the same ip link from my previous post.

What you have on?

It seems that others users got some problem also !

I’m not too sure as your net installer is different from the rest. I have no issue on arch linux, or the infamous cnchi installer from antergos which rebornOS is currently using. But then again, it sounds like it’s impossible to get the iso. Hope you can consider uploading to osdn. No source forge please.

did you check this ?

By Manuel The Realtek r8168 Ethernet card may (or may not!) work properly with the default r8169 kernel module. Thus EndeavourOS installs r8168 package by default. r8618 package contains the r8618 …

Well, it sounds like magic if the installer told you no network but managed to find a plasma desktop to install for you

@FLVAL I also have
Realtek Semiconductor Co., Ltd. RTL8111/8168/8411 PCI Express Gigabit Ethernet Controller
The workaround says to reboot, which would not help much when running the installer from a live ISO.
That was never a problem when installing other Linux OSes

The workaround says to reboot, which would not help much when running the installer from a live ISO.

Instead of rebooting you could try to simply load the module after unblacklisting, e. g.
sudo modprobe r8169

This should work on the live ISO.

Sorry I meant the statement in a sarcastic/joking way. It literally means “how come installer says you are offline but able to install a plasma desktop for u when the installer package only has xfce in it?”

You get what I mean?

Just for the record for distros like Arch, Manjaro, Archman, RebornOS all auto configured my machine to r8169 and apparently never had any issues but I will try the workaround and come back to you asap.

Now I do. Thank you for making it more clear.

Won’t work for me.
Updated the app first.
The installer takes a long time before it finally says, that there are no connection.
I even downloaded a new ISO, checked the sha512, flashed it to USB drive, not using Ventoy.
Tested both wired and WiFi, same result either way.
Just for the record, on both wired and WiFi, the connection is working when surfing with Firefox.

It works if I hit “Continue anyway”, but crash when partitioning. This might be because I’m installing it on an external drive. 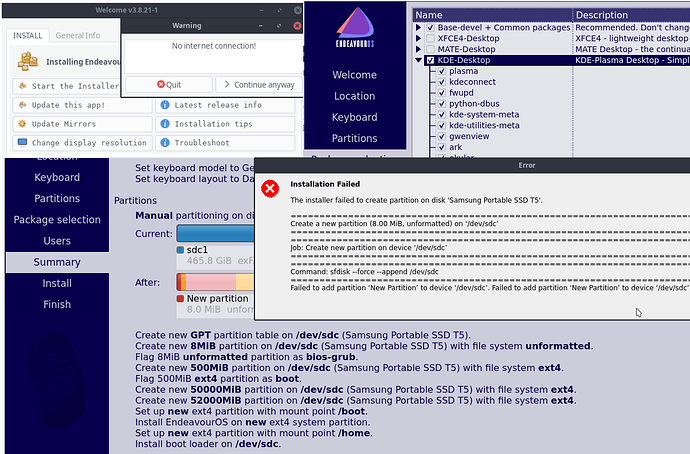 Your partitioning setup looks odd. Why are you flagging an ext4 partition as boot?
Can you post the partitioning scheme you are trying to achieve?

Your partitioning setup looks odd. Why are you flagging an ext4 partition as boot?

That’s an error, should have been fat32.
I have a working install, after doing the partitioning before installing

But maybe i did that error before. I’ll test again.