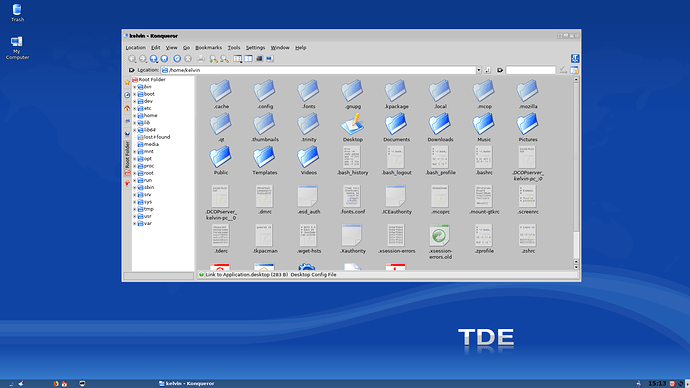 This is pure nostalgia Trinity aka KDE 3.5 was the most advanced desktop of its era. Well trinity forked it added features kept the feel of this fine desktop.
I installed it on Endeavourer.
Installing on a rolling release is not straight forward as Arch waits for no body so many libs had to be obtained and built for arch.
When done I was very pleasantly surprised fast booting, very responsive, 270mb ram, In fact its just as I remembered it 11 years ago, and why I jumped to gnome with the release of KDE4 and KDE5.
KDE3.5 Arch Kmod was the ultimate in 2008 and in a lot of users minds still is.

KDE 3.x - My first DE under SuSE and Slackware I think… like judd says: “memories”.

Too bad translations are not packed on third party repository for Archlinux:

Nice to see you here @FredBezies Trinity I had really forgotten how good it was and it still is very capable.
It like so many good things with Linux are not known to the current generation of non willing to learn users and developers its just a shame.

I never liked KDE so… But Trinity is great for small memory computer.

Users which started with Ubuntu 14.xx are really the typical “I don’t want to learn basics”.