There is something exaggerated in KDE net-install

One of the groups available in the KDE installation is “kde-applications”, which has 165 packages, most of which are programs that few users will use. I think adding this group at installation is an exaggeration. Is it possible not to install this group? Yes, but the group name can confuse the inattentive user because they will think that the group will only install basic programs instead of several unnecessary programs, causing shock and confusion after installation. To have a “common” KDE experience on Arch, you usually only need to install the “plasma” group with all dependencies and the “sddm” group with all dependencies and then install “konsole”, “kate”, “dolphin”, “gwenview”, “okular”, “dragon” and “ark” and some other utility I may be missing. This is just a note, because I think the “kde-applications” group is not useful for users, or at least not for the vast majority.

that’s true … and the netinstall release is out to get all this things sorted out together with you the users !

is what we do have at the list but there is also meta packages:

may better use some of them ?

I agree. It was a pain in the ass to uninstall all that stuff.

thanks for the feedback

If you click the pull down button (<) on the left of KDE you can deselect what you don’t want.

ah whell, i think if you have kdebase gwenview ark okular , you hit more the spot

I was expecting a more lean install and didn’t notice the pull down button.

A post was merged into an existing topic: Branding Calamares improvement after net-installer release

I was expecting a more lean install and didn’t notice the pull down button.

I did the same on first install and had everything including the kitchen sink, it was faster reinstalling than uninstalling everything. Things were much better after pull down deselect, you will have a lean mean KDE waiting for the things you want installed.

will be fine or not?

I did the opposite, going for a minimal Plasma install. Discover was still installed even though I marked it as unselected, and I had to add Konsole and Dolphin after. Those two feel like they should be included in the standard Plasma install to me if nothing else from the KDE Applications group.

Forgive me if Im going off topic, but I have been away for long & maybe left behind. Wasnt the original idea that that DEs will come directly from Arch with no tailoring on our behalf, apart from, let`say some light theming?

Yes, and it is still the same, but installing everything related to the DE is way too much, and user does not need most of the apps it brings in, so minimizing the packages is something good or not?

We have the same with GNOME as gnome-extra brings in a lot of apps not needed, same now with plasma.
Arch is providing meta packages now for kde to split the group into useful pieces.

In my opinion, it is a good idea to have a minimum set of packages, what will speed up installation and give user the choice to install whatever like on top of that.

i just do a plasma install with the minimized package list and it is running much slicker than with full kde-applications group installed.

Thanks! I didn t know that. Oki doki, then, I find it a nice step.

Some play with plasma installed with minimized package list, i like it! much more snappy than before: 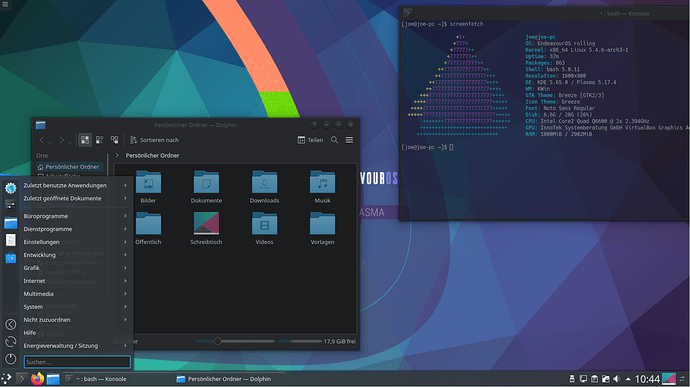 When I had Plasma installed and removed all the superfluous stuff, my system was running under 400 MiB of ram. It was a beauty to see

Is not only about files even if you have thise files switching baloo off or sort other things can help. To keep running aps in background keeping off