i use both now… alway have 2 x terminal

i use terminator + xfce terminal switch round on PBP

Can we have both? Xfce 4 and Termite?

Our first release of 2021 has arrived

To make things easier on development and to underline our minimal philosophy, we now ship only one new universal wallpaper for all DE and WM, implemented on both x86-64 and ARM.

We good? Wouldn’t want to lose all of @Shjim efforts?

No, don’t worry. We might change the wallpaper again on the next release or we will make an exception for Sway.

you can if it is useful, but i know some will call it bloat

I wait for @Pudge thoughts. See what he thinks.

no worry about effort… i no mind

But they’re amazing! I would use those by choice @Shjim

. At least on one of my monitors

Sorry for the delay. It is in the upper 60’s F today, and mostly sunny. The dogs decided to take us for a walk. It ended up being 4.1 miles according to the smart phone fitness app. Not bad for 11 year old dogs and 70 year old humans.

The way the Arm install-script is set up, it gets the .config and .profile config files from the github site, then installs them as is. So any new configuration put in the github files will automatically be used in the next new arm install. That is the way @joekamprad set up i3 for arm, and Sway works the same. Keep this in mind as we go along.

As far as terminals.
I will remove alacritty from the Arm sway-pkg-list until if or when it gets fixed. The .config file can still include alacrity.yml for x86_64 to use, and it will not hurt the Arm install for alacrity.yml to still be there. Config files are usually very small, so not much bloat. This will keep things the same in the github config files. I think it best for everyone to have one set of .config and .profile files rather than have separate files for x86_64 and Arm. Just my opinion.

It looks like it is either termite or xfce4-terminal for the Arm installs. I can add a little code to the user input section that if sway is selected an additional question can be asked if termite or xfce4-terminal or both are to be installed. Again having all three config files for alacritty, termite, and XFCE4-terminal shouldn’t hurt anything even if only one is installed. This would keep the config files the same for both architectures.

I don’t have the slightest idea if the avove panel launcher ideas are even possible or not. I am not familiar enough with sway to know. So at this point it is just a suggestion that may or may not be possible.

Do we know if alacritty still has active development for it? If not, the simplest thing would be to install both termite and xfce4-terminal on both x86_64 and arm, then have a launcher for one terminal on the panel and the other would be called on demand through wofi or a meta short cut. I like @joekamprad 's and @Shjim 's idea of one fixed terminal and one floating, but I don’t have any idea which should be floating and which should be fixed.

There are several ways to go here. The above are just suggestions. In the end it is @OdiousImp 's decision.

just my opinion for Arm (as alacritty no work ) i say use xfce-terminal for (mod+Return) as it easy configure + mouse support ( left ,right click ) Termite no have ( might be patch ?) Think New user not understand termite + no know how t configure .

@Pudge i set Termite ( Mod+Return ( it open any ws) xfce-terminal from wofi , it set ws1

Typing on phone so forgive me

I like this idea! My plan after some though was to just to use termite and xfce4-terminal for both x86 and ARM. It not as if the alacritry devs aren’t working its more I think they don’t want or find the need to implement this.

That would mean Termite as our main terminal (Mod+Return) and XFCE4 as a option. @Shjim termite has mouse support…I belive so. But yes I agree it the one of the harder terminals to configure. I just think I quite like the idea of the wayland built for VTE terminal to be the main.

Alacritty no longer for both…if @Elloquin is ok with that

@Pudge their are no launchers on the bar. I opted to add the application launcher instead. The icons depict the focused windows (thats probably what you meant…just checking)

for wallpapers…same thought you had.

@OdiousImp no mouse copy and paste . i do more search tomorrow

i no explain well

Hmmmm. OK thank you that would be a big factor.
I understand what you said perfectly the first time don’t worry!

I’ve just came along Terminology too…from enlightenment. Why must there be so many terminals!!!

Man Terminology is feature rich…Don’t know if it any good yet though.

It is interesting. Have tinkered with it in the past. 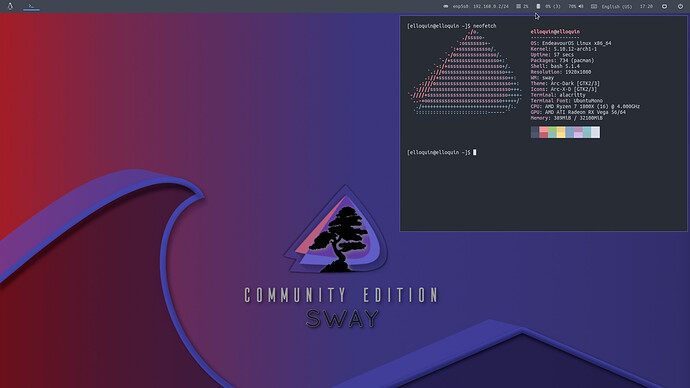 Replaced pulse with pipewire. No issues

Just following along here a bit - and noticed the ‘terminal’ discussion. Is there any reason not to have xfce4-terminal in drop-down (quake) mode on a hotkey - regardless of whether it is the default one in use? I don’t use a WM (too old (mentally) to remember the shortcuts on top of so many others over the years - including ones including the Right or Left Amiga keys!) but I often add xfce4-terminal to other DEs just for the drop-down and the easy config…

Can you get seperate audio streams? I can’t seperate stuff coming from Firefox with stuff from CMUS