[SOLVED] No luck with install on multi-boot system

I just tried to install (offline) and got no where. It all appeared to have worked according to the feedback, but the only tangible result is that it killed my actual Arch install

I was unable to find anywhere to exactly specify an EFI boot partition, which may be the source of the problem, but whether it wasn’t there, or just unreadable due to tiny fonts (on 3840X2160 screen) I am not sure. Any suggestions? I think I can recover the Arch install after this works (still have working Arcolinux, MX 19, Xubuntu) - I usually use rEFInd for booting anyway.

Hi - I’m new to EndeavourOS and the calamares installer (but not to Linux), so others will be able to give you better feedback, but I thought I’d mention that the installer will pop up a message window if no EFI boot partition is specified during the partitioning phase. But in some situations it will auto-select an existing EFI partition if it finds one, and gives you a message about that, too, though not in a separate window.
One way to specify the EFI partition is to go to the manual partition section, select the partition, edit its mount point to /boot/efi and set its boot flag.

Yeah - that is what I was expecting - but there was no place to specify efi anywhere in the installer - which is weird because in a previous troublesome install (arcolinux and MX 19) with Calamares, I ended up having to set the bios to allow only EFI boot attempts (which then forced the esp flag to show up to be chosen. No show here though, and yes, I got the no efi warning - and went back 3 times trying to find something to set to efi!

I guess I should retry again - maybe (though it isn’t obvious) if the installer is on a live session, I can hit a scaling option so I can see what I’m doing…

Hello @freebird54
Usually it shows EFI is at the top left on this screen. Otherwise it will show installation on MBR. Are your UEFI settings set to UEFI or legacy? 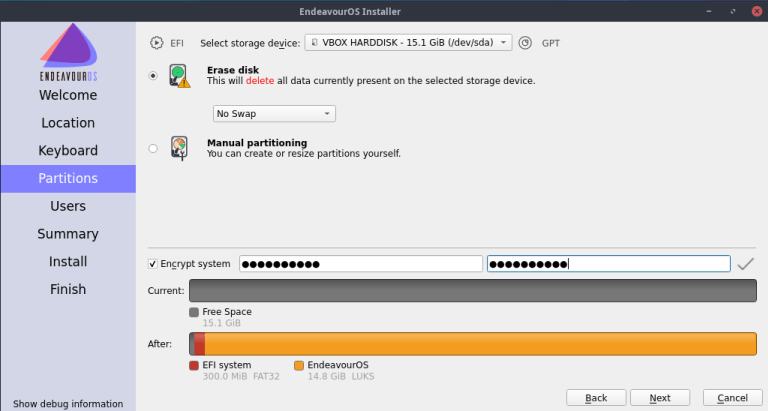 I don’t recall seeing a screen like this - perhaps it’s because I have a lot of drives? I saw about 4 oprions, not 2…

Anyway - a further try, after forcing the display to pretend I was on a 1920x1080 monitor (so I could see what I was doing) I discovered that I could select a mount point for the nvme drive, even though I was leaving it set to Keep mode. Choosing mount point of /boot/efi made the difference, and EndeavourOS came up just fine this time. Now I just have to go back in and rescue Arch - if I can remember the arch-chroot method properly

Click on the … dots and it should show a solution box.

Well - it is now marked more than 1 way!

Anyway - I should also add what was needed to recover from the whole mess, in particular the way it borked my Arch setup while it was at it. Apparently what it managed to do while incorrectly ‘defined’ is replace the vmlinuz-linux file in the UEFI partition with the older one from the ISO. So, the solution was to boot a live Arch, mount the root, arch-chroot into it, mount the rest of the system, then pacman -S linux to get back to the current kernel. I still have to go in and rebuild the grub entry to match, but I can boot it from rEFInd just fine (and I’m in it right now). Now to go see how much work it’ll be to Endeavour to create another working setup (groan - sorry about that, poor impulse control). Looks good so far, and definitely quicker (once figured out) than a classic Arch install - not to mention not so much of a memory test.