Hey guys i am new to EndevourOS Forum. Also my english isnt that good i try my best to explain my problem.

I would like to ask is it possible to run EndevourOS as my main system and run windows 10 on top in a (VM maybe in Virtmanager) for gaming etc video editing etc. Can i pass my GPU to the win10 i have ryzen 5 1600x and a GTX 1060 (6GB) (also using KDE desktop environment)
(I Tried a guide from Maagu Karuri but when i start the VM my screen blanks out and nothing works.)
Link to Maagu Karuri guide for vfio-single-gpu-passthrough :https://gitlab.com/Karuri/vfio

hi @Agki and welcome to the forum.
Keep in mind that passthrough requires a monitor connected to the gpu you are passing to the guest. Also the same GPU cannot be in use by the host OS (that’s what passthrough does, it relinquishes a resource and completely puts it under the guest control), which means you’ll probably need two GPUs and two monitors, or two GPUs and one monitor with two input ports and you’ll have to switch between inputs.

I’ll tell you how I solved my similar issue (although I have two GPUs, but one of them does not have a physical output port, so it’s still the same situation as yours).
I have installed a VM (using virt manager) on a physical drive instead of creating a virtual hard-disk for it. 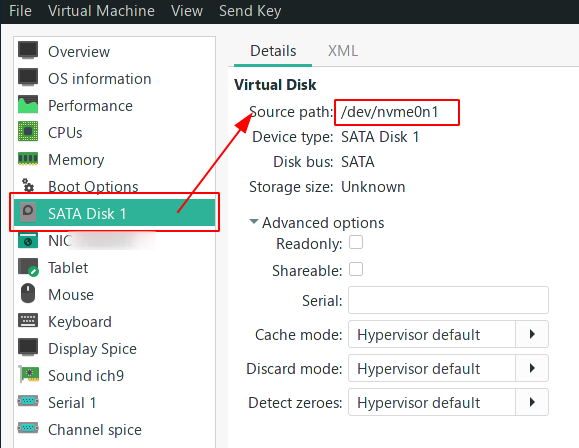 This way the machine functions with virtual graphics adapter in VM mode (btw, QEMMU/virtman virtual graphics adapter is extremely snappy compared to VirtualBox, so you might not even need passthrough, unless gaming), but when I need the whole power of the GPU I can boot into it (dual boot) as a non-virtual OS, because it resides on its own physical partition. On extremely rare occasions (I don’t do gaming nowadays) when I boot into it directly, the OS has access to all machine resources. Windows copes surprisingly well with the hardware changes it detects between running in virtual machine mode and directly off bare metal.

Another benefit of this setup is that the storage driver doesn’t need to be virtualised, so it runs exactly as snappy as a bare metal install even in VM mode.