Currently EndeavourOS is ranked 7th on the 6 month list.

Why do you think this is? Apparently, according to DistroWatch, Eos is more important than Elementary, Fedora or Arch… (Yes, I am aware this website’s rankings mean f-all, but people do look at these, so I wonder…)

How come Eos got there? Why do you think this distro gets the limelight as much as “we” do?

A lot of people like the thought of Arch, but HATE the installation (OOOH, THAT’S ME!!!). So they find something that works for them. One of the appeals of Arch is the minimalism. A lot of the other Arch based installers focus on throwing EVERYTHING and the kitchen sink. We want that minimalism of Arch, we just don’t want to deal with the irritation of the installation. So EOS fits those types. Could be 100% off. Wouldn’t be the first time. But hey, that’s my theory.

This Forum deserves a share of the credit for the high ranking of Eos. The atmosphere here is breathable by noobs. Likewise, Eos is simple to install and well-behaved after it’s installed. It makes Arch accessible to everyone. Combine a user-friendly distro with a positive, upbeat community and you get the result you’re seeing on distrowatch. My 2 cents…

Agreed. The welcoming feel of the community does help a great deal. Unlike at Arch you feel like a member her, not a noob asking too many q’s. I’ve seen this before once, but never since. I love this community.

Is there any way we could look at ISO download statistics, how many times it was downloaded from the official website in the last week, month, etc…? That would be pretty interesting to see.

And the mirror servers could perhaps know how many times a certain package from the endeavouros repo was updated. EndeavourOS has only six mirrors so gathering that data would not be too difficult.

And yes, before anyone says anything, anyone who has read my posts here for the last couple of months knows that I am vehemently opposed to any collecting of telemetry from the client machines without the user’s explicit consent (opt in, not opt out), but server logging does not fall into this category and should be free game…

Precisely, downloading not uploading. Tbh I couldn’t give a toss about those statistics but for those interested it might be worth doing. It seems to me that society places too much importance on stats nowadays. How do figures show quality or passion about something? They just show numbers, and ok, trends.

This I agree. I have never installed arch doing it the hard way. So I can’t compare. But I can imagine it’s not too easy…
With EOS everything is easy. At least I have never experienced any mysterious crashes or any other serious problems. Of course I have had some small quirks every now and then, but that’s normal with any other operating systems. So I’m not surprised at all why EOS has raised it’s popularity so quickly. System that just works is we all want, right?..

I compared EOS to SwagArch one or two days ago. A small distro with only one maintainer it was never going to be as polished as EOS but I think the idea was the same: A Good looking, easy to use very close to “pure” Arch distro.

I think EOS have succeed in that goal 100%. There are a few others, but I think EOS benefits from being, and marketing, itself as basically one step ahead of an Arch install script and having an amazing community.
Garuda looks amazing, Majaro’s always a quality product, Arco is doing an amazing job and that Youtube channel deserves 1000% more subscribers. But they are still even further away, or at least marketing themelves as “something more than Arch”, with Manjaro basically not even being Arch anymore in the same way as Ubuntu isn’t Debian anymore.

Again, I think the success is that EOS have found the exact balance between say the Zen installer or Anarchy on one side and Garuda and Arco on the other. When you have actually put enough work in to call yourself a new distro, but still can honestly say " If you chose us you are just installing Arch and have one single extra repo. And an amazing community of course".

Word of mouth, and without being too obvious, some ill-fated decisions within other communities. I’d place more weight on the number of “Hello!” messages in Lounge than the stats on Distrowatch.

This Forum deserves a share of the credit for the high ranking of Eos.

Also kudos to the mods. Very level headed, friendly but not afraid to step in before topics wander off into the wilderness.

Currently EndeavourOS is ranked 7th on the 6 month list.

No rest till it is first in a meaningless arbitrary ranking. Just imagine the bragging rights.

How come Eos got there?

It has a solid base (Arch) with a friendly comunity (that is key to a linux distro, in my opinion).

And an active DistroWatch bot helps, too.

It might surprise some that what other communities do has affected the users number of EOS very little, percentage wise. I’ve monitored the adoption rate changes during some popular migrations caused by meltdowns in other communities. We’re talking single digit percentage changes in EOS user base during such migrations.

I can’t speak to the others, but as a former Elementary user (my son still uses it on his machine) I can just tell you that their “it’ll be done when it’s done” attitude when it comes to releasing an OS based on a 2 year old LTS Ubuntu has turned off a LOT of people. Devs certainly have the right to do whatever they want on whatever schedule they want, but the user still has the right to pick a distro.

What I was trying to point out is that when part of a community decides to jump ship, they tend to spread out to various distros.

Yeah it is honestly, when talking about the “refugees” as a whole, more an issue of the distros they’ll refuse to try.
Except for people choosing that specific distro as their first, most Linux users have distro-hopped enough that they already have a second favorite.

For me, it would depend on mood and time if God Forbid EOS disappeared. I would either go back to pure Arch OR I would go Fedora. I would never go Debian based, I just don’t like it for some reason. 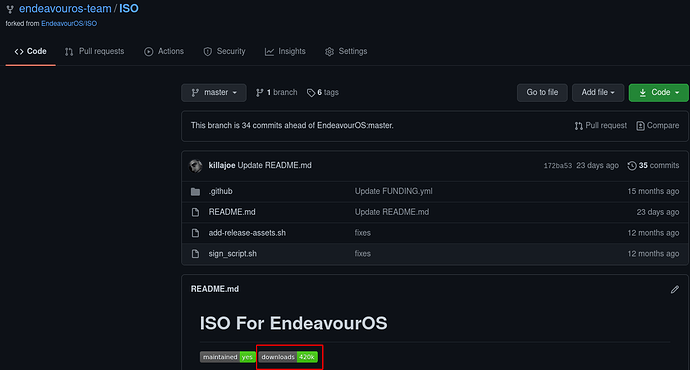 hmm. that’s an impressive number I think. I guess the 7’th place on Distrowatch isn’t a fluke.

You can say about the DW chart what you want, they are an indicator of sorts. There must be heightened interest in our cuddly little distro. And the more people are interested enough to click on the EOS website, the more will download/install it, too. EOS ain’t on rank #7 for no reason!

As I always say: Cream rises to the top!

This I agree. I have never installed arch doing it the hard way. So I can’t compare. But I can imagine it’s not too easy…

I think single digit is what you’d expect in line with the spread to other distros and not just a vector of 1. Some of it is complete chance, - I found EOS completely by fluke. Some of it has to do with a common frame of reference amongst community groups. Either way, most of us just want somewhere quiet to be without too much drama…