The default terminal when launching terminal based applications is uxterm. I would like this to be xfce4-terminal. This is not the same issue as “how do I set my default keybinding to open xfce4-terminal”. I have tried to parse multiple arch wiki and other pages on how to set default applications with xdg-open, mimetypes, etc. I am lost!

My ~/.config/i3/config file is configured so that mod+Enter opens xfce4-terminal.
After default installation the result of echo $TERM was xterm-color
I have since set the TERM variable in my .bashrc file to “xfce4-terminal”
Echo $TERM results in “xfce4-terminal”

mod+d and selecting htop or ranger results in the application being launched in uxterm.

If I can get help with this, I can make sure I set my default applications (sometimes links from TUI apps open in firefox and not brave for example).
Would be good to get a best practice on this, i.e. should these variables/defaults be controlled in the user (home) rectory, or globally?

This post seems to have some help. But I’d prefer to set this up in a standard linux way, rather than the YAD settings, unless this is the only way in EOS?

LINK to my SPECS

setting variable TERM=xfce4-terrminal in .bashrc actually messed up my shell

This is expected. This variable is not what you think. Read Archwiki - Environment variables for more.
There is only an unofficial/frequently used var for the default terminal: TERMINAL
But each rc provider for WM/custom keybindings configuration will set terminal differently.
Most of them hardcode terminal app, others use $TERMINAL exporting this var in ~/.profile.
You should look in i3 config to confirm how those keybindings work.

My terminal prefrence is set in ~/.profile :

In my i3 config file, default terminal is set to :

and if i need to configure a terminal application in i3 config file, i use :

also possible to have *.desktop files modified to do that … as dmenu will use such.

Some application for example i3-sensible-terminal go through their own list of terminal and select the ones on top first.

possible to have *.desktop files modified to do that

I am not sure what this refers to, but the .desktop idea is one more of the possible solutions. Using env var $TERMINAL is one and explained very well by @Erreffel1 .
EnOS or any distro, can

, since my desktop has Intel and a 390/fermi nvidia card. No xorg.conf files exist. Everything runs on Intel and when an app needs more, I use prime-run <appname>. (using DRI-PRIME=1 creates a parsing mess in several cases)

Edit: I forgot to say, I am using nouveau, of course and right now I test gnome wayland session, which just works.

Disclaimer: I don’t play games. I use my time productivelly

i3 could need that in configs… but using GNOME p.e. it will use gnome-terminal already without the need to set it…

is working for exactly initial question is about…
for me I need to remove the “Gänsefüßchen” like so: 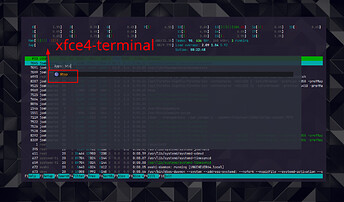 EnOS or any distro, can

we do only have xfce4-terminal in the configs for the two themed installs xfce4 and i3 and yea we do not change terminal for p.e. GNOME or Plasma or Mate e.t.c they us the default one from default configs we got from arch repo…

Maybe you could create some wrapper for rofi the same way it is possible for dmenu?
Here is an example dmenu_recent. For the first time you run a software you need to specify if it should run in terminal or in background as a standalone application.

Or make use of *.desktop files or run custom scripts from you ~/.local/bin that is just a custom start script for specific softwares.

Wow thanks everyone, I’ve been super busy and haven’t had a chance to check the forum. I appreciate all the replies and will update you once I’ve tried them.

will be what you need … very simple…

Thanks to everyone that commented!
@petsam and @joekamprad suggested that:

assign can be changed to