Thanks, I’ll use this as the solution temporarily until a update comes out to fix it.

So, I installed the lts kernel, and deleted the kscreen folder, restarted, and now it apparently works??? It dosen’t stop working after the lock screen pops up.

And there it happened again. This is very random so i won’t post anymore on this post until the problem is fixed.

Are you using an AMD Ryzen CPU? Found two other forum posts with similar issue. Seems plasma needs to iron out a new bug but wondering if it affects only amd users.

Hopefully gets fixed soon. Maybe worth submitting a bug report to KDE, the more people do it the faster it will hopefully get fixed. Why it affects AMD is strange, if it is related. I would try main and lts kernels. If problem persist might really be related to recent plasma update.

The problem persists on both main and lts kernels, I will see if i can send a bug report to KDE.

Plasma has now released a new version with some fixes, I will use it and mark this post as fixed if it works now.

Still no luck for me. My system recognizes that there’s another screen, but once I enable it, there’s just a black area added to my main display. I can actually move my whole desktop like the map in an RTS game, by hitting the screen’s edges with my cursor. The second display that I just enabled in the settings, though? Still no signal.

I have opened a kde bug report, and it got merged with multiple others.
https://bugs.kde.org/show_bug.cgi?id=460341

An easier temporary fix instead of deleting the kscreen folder, is to find out what your displays are called with xrandr | grep connected, and issuing the following command
Note that in your case the --right-of flag may be --left-of depending on where your second display is.
And replace HDMI-0 with what your xrandr identifies your second display as.
Also replace DP-0 with your main display.
After --rate you put your screens refresh rate (most commonly 60)

Just wondering if you could then use autorandr to save that profile and start it automatically by placing the command autorandr --change, similar to what I use for i3wm.

I use i3wm, my preferred options is to use autorandr: autorandr --save screen1 autorandr --save screen2 Which save both configurations. You can then add the following to your config to load automatically autorandr --change If you are on logged in your session and want to swap lets say from screen 1 to 2 configuration you could open terminal and autorandr screen2 Edit: I switch frequently different monitor config between home and work. One thing I learned is to logout of the session t…

Not sure where you do this in KDE with sddm, perhaps .xinit or ~/.xprofile or similar in the user home folder.

Well, It’s really random. Sometimes the screen dosen’t work after the computer has been in lock mode on sddm, and sometimes after restart.

Perhaps the idea I posted above could work because it automatically recognizes your current monitor layout you saved upon login from your display manager. I also use this on other wm like dwm and qtile. It simply uses xrandr and starts this profile at login. But autorandr is a bit easier/flexible to my opinion.

That would probably work.

The direct instructions are here. It’s also similar to arandr, but I personally prefer autorandr… 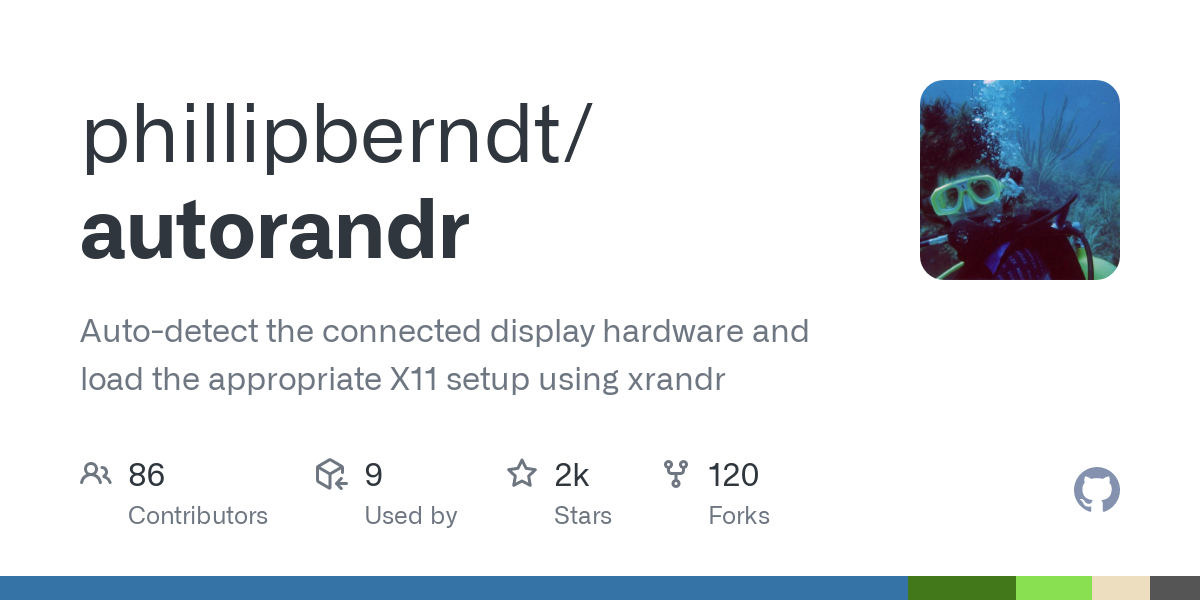 Well, there are a few separate posts about this, which should be merged into one if possible. I started this one: https://forum.endeavouros.com/t/lost-one-of-two-displays-for-one-user-only/32936

I also filed a bug report with KDE, as have others, and they are merged into this one: https://bugs.kde.org/show_bug.cgi?id=460341

Since only the Triage guy Nate Graham who is seemingly always on duty, has so far looked into it, but no one who may be able to help has even chimed in at all, and it’s been a week now.

So, I think if more of you will join in over there and make the issue more urgent, it will get fixed sooner. Trying to find workarounds here, although may help, aren’t an actual solution, and it’s their stuff, so they should be in the best position to help.

It seems to only happen when a system puts the monitors in suspend. If you never let it, then you will not have the problem, and once it happens, nothing seams to bring back the lost monitor. It’s like KDE can’t find it at all, because it’s not looking!

Are the monitors hooked to display port or Hdmi? Do you have a multi-monotor conf file?

The one that stopped working is the display port. The card has two outputs: one HDMI and one Display port.

I do not have an /etc/X11/xorg.conf.d/10-monitor.conf file, but if I did, those would be system wide, and I have the problem in one user account (started on login after it went into suspend mode) but not the other user account where both monitors work as they should. It is user specific, not system wide. If it’s a file setting then it should be in a users home directory somewhere.