Saving to a remote folder in Dolphin

How can items be saved directly to remote folders in Dolphin? Basically this question if not sure what is meant: https://askubuntu.com/questions/1190060/how-to-save-to-remote-folders-in-dolphin

This is one of the few things that miss from Nautilus.

Depends, for dropbox you can simply install dropbox integration for nautilus. I use nextcloud, it is integrated with nautilus and synchronizes to remote folder.

I guess the question is which type of remote connection you want, there is also google drive etc…

Here’s what I do. Something similar might work for you. I use Cloud Sync to link the remote folder to my nas. I then map the nas to a mount point in fstab. So essentially I can use cloud services through my NAS, without having to worry about client-side apps or sync issues. The sync happens from the nas to the cloud/remote folder, and it’s seamless. I’d recommend nfs over smb if you’re working with network folders.

For example set up a link on a NAS to a remote folder, and then add a line in fstab ;

Mine has the folders already in dolphin but i don’t have any network shares set up. 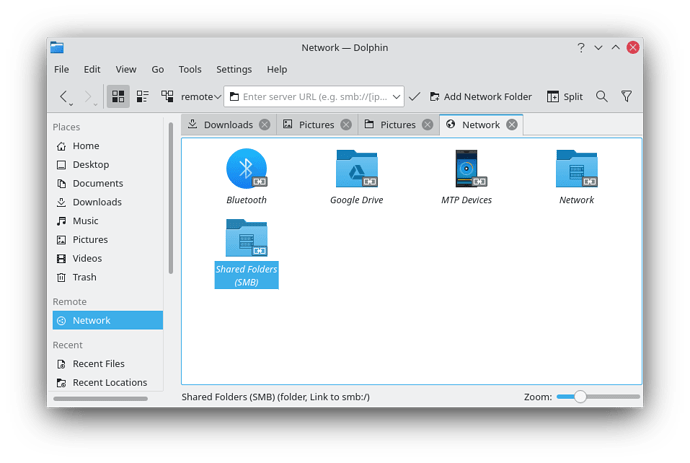 Open a web browser and save a file though, network folders will not be present.

Open a web browser and save a file though

That probably isn’t dolphin. It is the file chooser. Depending on the application, it might even be the gtk file chooser. Can we see a screenshot?

Taken from original link from 1st post, but it is the same as if took own screenshot. 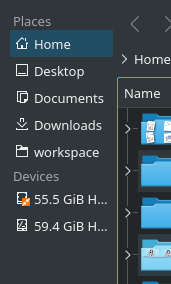 That is probably the kde file chooser. I am not sure if it is capable of accessing smb shares directly.

As a workaround, you could always use a systemd automount. Then it would show up under Devices.

Thank you for clearing this up. Disappointed that the “KDE file chooser” cannot see SMB shares.