Today I tried to replicate the test using a noctua fan, the same stress command I used before (stress --cpu 4 --timeout 820 --verbose) and this is /boot/config.txt:

Temperatures didn’t go over 54 Celsius, and were usually at 51/52. After the test, they quickly dropped down to below 40.

I did the test a second time and it was almost the same results: this time it reached 55, one more degree.

For ta third run I let it rest a bit more and it shows, temperatures were lower than during the first two runs.

More importantly, I guess, is that I’m running from an SD card and this thing flies. Even while doing the test it’s still quite responsive.

Thank you so much for taking your time to run the test! And great presentation in your screenshot!

Your results show then a significant difference in temperature running the stress test, even 220 seconds longer than what I did, cooling your Pi with a Noctua fan. It does give some factual info on the efficiency of an active cooling solution like yours.

Even though my casual usage of the device will land it on temperatures between 40-50 in average, I think I should be looking to get a better fan, one like Noctua or perhaps an Ice Tower. However I am not that concerned as I was before given that the max temp before action is taken to cool the cpu down is set to 85, it would be more for the principle of “better safe than sorry”.
For now, I have the temp_limit=70 in /boot/config.txt which gives a good margin to the 85-degrees-limit.

Thanks again for posting and sharing your findings! I appreciate it.

My pleasure! I like these types of findings, comparisons, tests, for the sake of experimenting and for a bit more knowledge.

And if I can contribute to stir the Arm forum, all the better then

Myself, I am rather open to try out and experiment with new thing so if there are things on the ARM-side of EnOS to do I’ll be glad to help out.

I just wish I had anothe RPi to keep for more “serious” work. Back then when I bought mine, just a couple of months ago, they were still available and reasonably priced. Not now unfortunately.

And if I can contribute to stir the Arm forum, all the better then

Sounds great! Stir it up!

Is there some significant benefit to overclocking?
I did some thermal test before (Heatsinks are cool (sometimes)) but I have not yet found a reason to overclock it.

21 posts were merged into an existing topic: [ARM] Install a headless server on an ARM device

Is there some significant benefit to overclocking?

With my limited experience with Pi, I’m not the best person suited to answer your question.
Since I almost immediately, after starting using my device, began fiddling with the config.txt, I have kind of lost the reference point to the unclocked performance of the cpu.

Currently I have these values

and I use cpu power scaling set to ondemand.

Under moderate load the cpu seldom peaks at 2300 Mhz and with my moderately inefficient cooling, I get reasonable temps way below the “dreaded” 85 degrees.

I would like to believe, or rather I am under the impression, that the system is quite responsive, when launching apps etc and the cpu bursts up to 2300 but this is only subjective impression. I haven’t really done extensive benchmarking and timing to get some factual figures to go by. Perhaps I’ll do that when I find some time later on. For now I have a feeling it is working quite well.

Here is a screeshot from of a video from explainingcomputers.com: 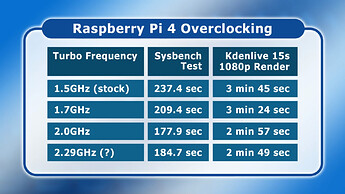 Getting back to the topic of overcloking, I ran into some instability while running with the configs mentioned before (system installed in an SD card) while doing a backup with restic from a portable SSD to a non-portable HDD. I also have a bluetooth mouse, which I think also draws power from the CPU.

The screen turned off and on while running the restic backup. So I went “back” to the values Pudge posted and the command / backup is now running fine.

On a side note:
I used to have to edit /boot/cmdline.txt so that the usb mouse would work with no slowness. But this install doesn’t have this file. There’s no mouse slowness, though, probably this install never had this file and I didn’t even think about it until now.

What program are you using on the right? Looks pretty cool