Hi all, I’m new to EndeavourOS and Arch Linux in general. I’ve always wanted to play around with and Arch distro, but never had the courage to do so until I came across EndeavourOS on Distro Watch. Anyway, I have a Windows 10 host and I use VirtualBox to install various *nix distro/OS guests. I’m in the middle of installing EndeavourOS, but I’ve encountered what looks like a bug. Upon creation of the guest VM and first bootup into the x86_64 ISO, I’m presented with the Welcome app. But, when I click on “Start the installer”, the bottom part of the screen that pops up gets covered up by the taskbar. So, basically I see that I can choose between Offline and Online install, but I then can’t actually see or click on either button as the taskbar is covering it up.

I found the solution to this was to click on “Change display resolution” in the Welcome app, and choose something bigger than my physical screen size, allowing me to scroll. (I should add here that I tried resizing the Offline/Online choice window first, but I couldn’t resize it.)

So, I’m not sure what stats might be helpful to share in terms of my setup, but I’ll share some stats I think would be relevant. If you want to know anything else, let me know. Anyway, my laptop is an HP Elitebook 8470p meaning it has a screen resolution of 1366x768. It seems the default resolution that the Endeavour live cd started with was 800x600, which was I guess too big (or too small?) to allow the Offline/Online choice window to fully fit. I changed it to 1440x900 and that seemed to do the trick. As I mentioned above, it caused the VM window to have scrollbars, since 1440x900 is obviously bigger than my laptop screen size. But, it did allow any of the installer process windows to be shown fully, and all I had to do was scroll up or down.

I don’t know if anyone else has gotten this issue, since as I said, I’m new to EndeavourOS. I am coming from a mixed Windows and Debian background. I would call myself a beginner/intermediate Linux user (or, high-beginner / low-intermediate to get more specific). As an example, I actually installed Endeavour once already, but decided to reinstall because the first time I selected Xfce, Budgie and Deepin, thinking I would just be presented with an option to choose my DE at logon. When I realized that wasn’t going to happen, I searched for how to remove a DE but then figured it would be easier to reinstall. However, while doing this search, I found out how to and installed Google Chrome using an article with some directions. So, I’m not afraid to use the command-line, but I frequently need to be shown which commands to run.

Just a note here - if you hold the ALT down, you can use the right mouse button to drag the window around - allowing access to anything hidden. I am impressed with your solution, too, though!

The information floating around “out there” about how this all works is incredible (large and comprehensive) - and don’t be afraid to ask when you get stuck on something either.

Welcome to the purple side!

(I should add here that I tried resizing the Offline/Online choice window first, but I couldn’t resize it.)

we do use yad for this welcome windows to show up, the huge space after the text and before the buttons is a current unfixed BUG on yad itself, usually the window would be a lot smaller.

For some times now archbased Distros do not scale automatic on Virtualbox, so as long as you do not set a resolution in a installed VM or on the LiveSession it defaults to 600x800.

I selected Xfce, Budgie and Deepin, thinking I would just be presented with an option to choose my DE at logon.

The trick with virtualbox when installing is to click on maximize then go to view virtual screen and select the size of your current resolution. You need to to this just after the ISO starts loading. At first the selections for resolution are greyed out until it gets further on. Then as soon as you see them available select the one you need. Then when the ISO is fully loaded the screen size should change automatically. Occasionally it will be slightly larger and you’ll have scroll but most of the time it will jump to the correct resolution. You have to be quick and time it right. I’m so used to doing this as v-box is my go to. After the ISO is loaded and you boot into the newly installed system it will automatically be correct if you do this right. I have been doing it for years and it works.

@freebird54
Thanks for the reply! I didn’t know that about Alt, but I’ll try it next time. Does that only work with the live cd / installer, or in an installed setup as well?

@joekamprad
Ok, I’m glad the bug is known about. I did see the option to change WMs but I didn’t know if this would change the DE as well. (I didn’t have automatic login selected). But it’s ok for now, I reinstalled as I said and stuck with Xfce. Thanks for the reply!

@ricklinux
Wow, thanks for letting me know that trick. I didn’t know you could resize the window pre-installation of the Guest Additions. I always thought the only way that things like window resizing, scaling, etc. would work was with Guest Additions.

Does that only work with the live cd / installer, or in an installed setup as well?

Actually, that comes with XFCE by default - very handy as the ‘edges’ can be a bit tough to get hold of! ALT and left mouse for moving it around as well. Lots of others, and you can reassign them to other key combos if desired…

@joekamprad
Ok, I’m glad the bug is known about. I did see the option to change WMs but I didn’t know if this would change the DE as well. (I didn’t have automatic login selected). But it’s ok for now, I reinstalled as I said and stuck with Xfce. Thanks for the reply!

On loginscreen you can choose Desktop Environment like XFCE4 Mate e.t.c. a WM is the window manager used inside a DE to handle Windows… or if you install i3 a so called stand alone WM 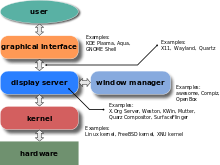 A window manager is system software that controls the placement and appearance of windows within a windowing system in a graphical user interface. Most window managers are designed to help provide a desktop environment. They work in conjunction with the underlying graphical system that provides required functionality—support for graphics hardware, pointing devices, and a keyboard, and are often written and created using a widget toolkit. Few window managers are designed with a clear distinction ...

In computing, a desktop environment (DE) is an implementation of the desktop metaphor made of a bundle of programs running on top of a computer operating system that share a common graphical user interface (GUI), sometimes described as a graphical shell. The desktop environment was seen mostly on personal computers until the rise of mobile computing. Desktop GUIs help the user to easily access and edit files, while they usually do not provide access to all of the features found in the underlying ... 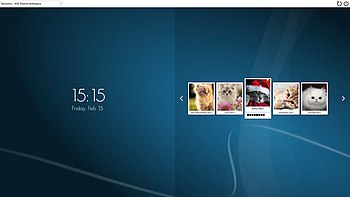 In the X Window System, X display manager is a graphical login manager which starts a login session on an X server from the same or another computer. A display manager presents the user with a login screen. A session starts when a user successfully enters a valid combination of username and password. When the display manager runs on the user's computer, it starts the X server before presenting the user the login screen, optionally repeating when the user logs out. In this condition, the DM real...