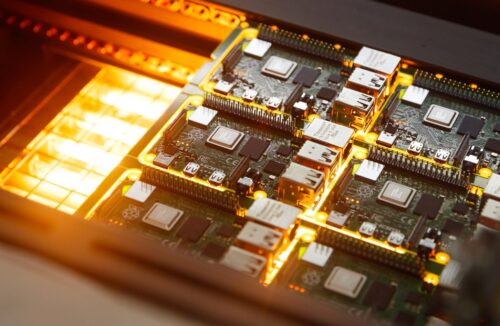 For the first time in a couple of years of semiconductor supply chain hell, we've got some good news for you. A bump in single-unit availability this month, and a cheerful outlook from the second quarter of next year onwards.

Where is my Pi? Here in Canada the major vendors for Raspberry Pi have been sold out on all pre-orders of Pi 4 kits. You can get the Pi400 but Pi4 kits you can’t even order them.

I’ll sell mine for cost. Special for EOS users. Comes with Aragon case and charger. I still think this thing is useless.

Your probably right about that. I already have one too. The Pi400 but i probably aren’t getting anymore.

I’ve got a rpi4 4gb. I bought it to watch football on.

It’s too slow to watch football on. It’s been sitting in the box pretty much since then. I had pre-ordered it. I’ve had it for years. I’ve probably used it for like 15 hours, almost all of which was me trying to get it to play football. Otherwise, it’s just taken up space since I got it.

Like once or twice a year I’ll see something about an update, or so and so just released something for it. And I try it, like an Alzheimer patient. And I’m like, wow, this . . . still sucks. And then back away it goes and I still have no use for it.

Did you try some old school emulation on it ? Like retropie for example ? Or home assistant (my use-case) for some home automation.

I used mine for 1 hour since I got it last year. I can’t figure what I would use it for

too slow. What was I thinking.

I mean, perhaps I could use it to build a skunk scare trap. Motion sensor plus light.

I use several pi’s

I do not have a Pi 4 and do not need it. But I do have a 3B+ running PiHole and using a NFS on it. I set the thing up once 2 years ago, update it weekly, forget about it the rest of the time and just enjoy the benefits the PiHole brings us.
I will probably get another Zero W to read the new smart meter we got and let him draw nice graphs and curves

I can’t figure what I would use it for

If you want to play around with a LAN server, see here
https://arm.endeavouros.com/headless-server-install/

I bought it to watch football on.

It’s too slow to watch football on.

I don’t know who suggested this would work, but the Pi was never meant for this purpose, it is too weak. Most people use it for things @Root and @Pudge listed in their posts

I pre-ordered it. I have one of the first ones that came out. And a mini computer with 4gb ram on paper looked like it should have had no problem playing a web browser video. . .

It has no problem playing 720p videos on CPU decoding. Anything higher is an issue.

If you use hardware decoding on mpv (ffmpeg) you can watch 1080p. But again that’s not for live sports

Yup. Not good for live sports. I was originally going to mount it to hte back of a TV to hang on hte wall. That was the reason for it.

Try Odroid N2+, someone I know just installed kodi on endeavouros arm as a TV box for their parents. Apparently its is working well. We even got the HDMI CEC working for remotes.

All very cool. I already got a thinkdock that goes to my laptops that works good enough!

I use my Pi 4B 4G for:
Pihole + Unbound
VPN
Syncthing
Jellyfin

It has served me well the past 2 years.

I could never get KDE to work properly on the Pi400. I have xfce on it for now. I think I’m going to try PopOS on it even though it’s Gnome.