Recommendation for a simple image editor

I want a simple image editor (for creating blog posts and guides). Basically to edit screen captured images. I want to add colored boxes or arrows pointing out buttons of functions. Like SnagIt for Windows from TechSmith.

I don’t want a copycat application but I would like to know something with similar functions for the editor of SnagIt. I don’t want to use GIMP because it’s too much for what I want to do.

Basically to edit screen captured images. I want to add colored boxes or arrows pointing out buttons of functions.

If this is all you want I usually replace the built-in screenshot application with flameshot. It is a screenshot utility with a built-in editor.

Alternatively, if you want a standalone editor, you could consider krita which is fairly fully featured but more intuitive than gimp.

There is also pinta and kolourpaint.

I second Dalto on Flameshot, very simple to use. 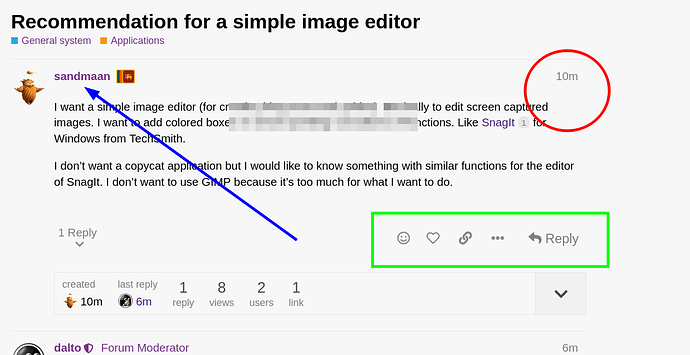 Maybe try PhotoFlare? I’s not as good as the French original but superduper easy to use.