Question about Motherboard BIOS and Microcode

Just read an article about a pending update for AMD BIOS. I understand the Linux kernel supports “microcode updates” that allows us to get these updates ahead of updates to motherboard BIOS. I do have amd-ucode installed and, just now, confirmed it was being loaded in my grub.cfg.

Does this mean I don’t really need to worry about updating my motherboard BIOS (unless for some other reason specific to the motherboard manufacturer)?

The last update, at least for my motherboard fixed these problems:
cold boot bug and fTPM stutters.

So, its not exclusively for microcode

No, the BIOS/UEFI (for the motherboard) is not the same as processor microcode (for the CPU).

I flashed my motherboard BIOS when I built this PC but, I’m leery of doing it again unless absolutely necessary since a power failure or some other hiccup can brick the motherboard.

UPDATE: After researching what fTPM was, I realized that I don’t actually need it. I only run EOS on this machine and access to it is fairly controlled. Disabled it on the motherboard and it booted back up just fine. As I said before, I’m loathe to update the motherboard firmware unless there really is a need to, especially given that everything seems to be working just fine.

Latest three BIOS releases for my motherboard, the release notes is not complete based on what I found in ROG forums.
You have AGESA for newer CPUs, you have some fixes and mostly important, improve system stability. 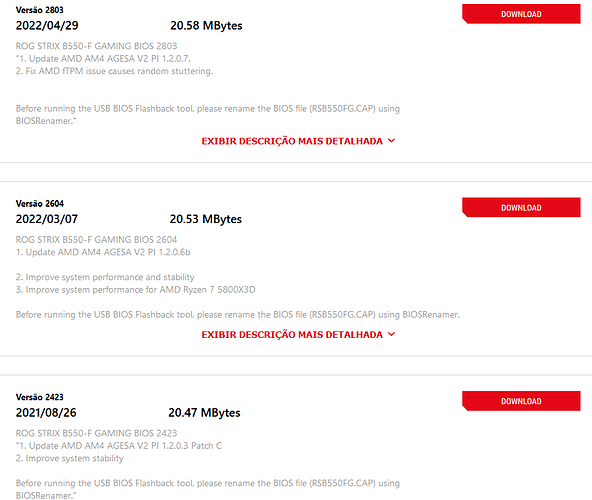 The UEFI Bios updates are very important. They usually have either fixes or updates and new AGESA which is what controls all the power processes of the CPU and hardware for AMD and is for stability and performance and or security also. I have always updated my boards for years and on my current Intel board which is a Z370 it has had 13 or 14 Updates since new. My AMD X570 has had i think 15 updates since new as i just did one recently.

UEFi Bios updates are critical for the security and performance of your computer. Get a UPS to avoid any issues.related to power loss during an update.